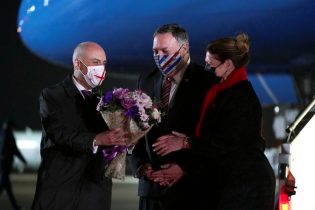 TBILISI (Reuters) – Thousands of Georgians unhappy over the way a recent parliamentary election was held took to the streets of the capital Tbilisi on Wednesday as U.S. Secretary of State Mike Pompeo held talks with politicians and a church leader.

Georgia, a small South Caucasus country which Washington has traditionally strongly supported, including with military aid, is Pompeo’s latest stopover on a multi-country tour. His next stop is Israel.

Pompeo told the Georgian prime minister that he recognised “the pain and difficulty connected to the (Russian) occupation of your country,” a reference to the fact that Russian forces garrison two breakaway Georgian regions after a 2008 war.

Pompeo said the United States wanted to continue supporting Georgia in building its institutions to ensure “free and fair elections and all of the things that come with robust debate and democracy”.

“Georgia needs continued and active U.S. involvement to support its security and democracy in order to push back on (Russian President Vladimir) Putin’s aggression in this frontier state,” Giga Bokeria, an opposition leader, told Reuters.

Outside, thousands of people formed a live chain in the city centre holding a huge Georgian national flag and posters saying: “USA – Thanks for supporting our liberty!” and “Elections rigged by Russian oligarch”, referring to Bidzina Ivanishvili, the head of the ruling party, who made his fortune in Russia in the 1990s.

According to official results of an Oct. 31 parliamentary election, the ruling Georgian Dream party won 48.23% of the vote, with the largest opposition party, the United National Movement (UNM), taking 27.18%.

The opposition accuses Georgian Dream and its supporters of vote buying, of making threats against voters and observers, and of violations during the count. Eight opposition parties, including the UNM, have said they will boycott parliament and are demanding an election re-run.

Georgian Dream leaders have denied the opposition’s accusations, and international observers said that the election had been competitive and that fundamental freedoms had generally been respected.