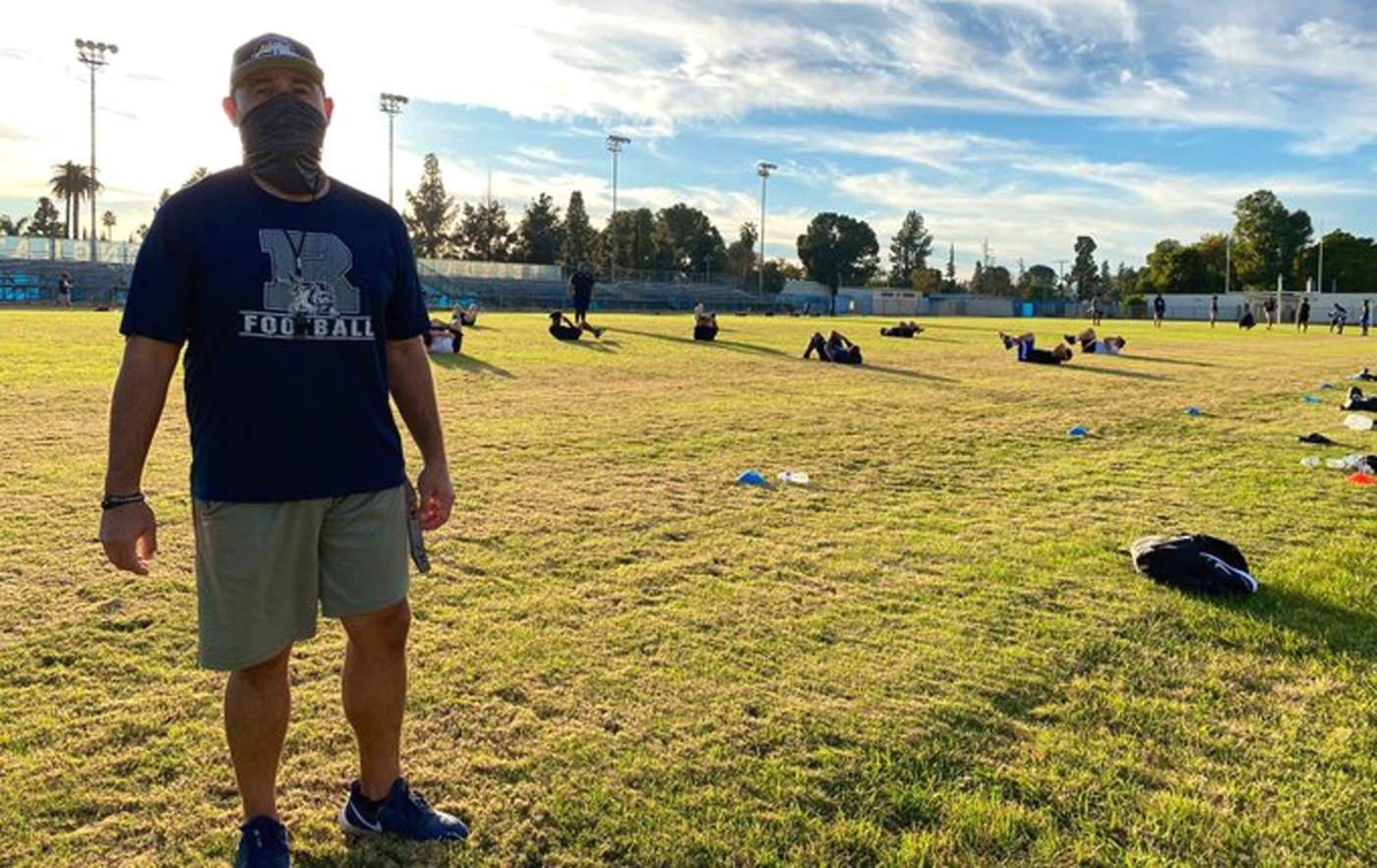 “Hey, coach,” Cunningham said as he passed by.

Usually, that kind of tardiness to practice wouldn’t be tolerated, but given the circumstances, Arreola is just happy to see his players on the field again. The Regents began conditioning Thursday, Nov. 12, after LAUSD Superintendent Austin Beutner gave the green light for athletic workouts to begin on Nov. 9.

“Seeing the guys is great,” Arreola said. “I can see the excitement.”

Roughly 30 players were on the field Tuesday after being cleared to participate by meeting the new district health guidelines, which require more paperwork than a standard physical and proof of insurance. Additionally, student-athletes have to fill out a COVID and compact waiver. The COVID waiver acknowledges the voluntary risk of conditioning, and the compact waiver is a contract signed by the athlete and their parent or guardian if they are a minor to abide by the workout rules.

Reseda High football coach Alonso Arreola had roughly 30 players out on the field today for conditioning. He said there’s no question the players’ spirits are up since they began workouts last Thursday. pic.twitter.com/mPK3fb22BE

The team’s Zoom calls were getting monotonous, repetitive, and frankly, boring. Even Arreola could sense his assistant coaches getting tired of it. Until last week, the Regents hadn’t been on the field since March.

“After a month of the Zoom calls, I understood when players didn’t want to turn their camera on,” Arreola said.

Reseda is crossing its fingers for a season this school year after winning the City Section Division I title last year by defeating El Camino Real 44-26 in the final. The team graduated playmakers Mario Martinez, Dranel Rhodes and quarterback Trent Butler from that team, but return a majority of its championship roster. All but one offensive lineman returns, linebacker duo Saleem Marshall and Myles Chancellor are back, and dynamic junior quarterback Kameran Charles is ready to step into the limelight.

At this point, in mid-November, the high school football season — especially in the City Section — doesn’t look promising. Last week, Beutner said he doesn’t see a scenario where athletes can compete while students aren’t allowed in the classroom. This seems to mean that students in class is a prerequisite for athletic competition in the City Section.

With COVID-19 cases rising, and seeming all of Southern California in the most-restrictive purple tier, it’s hard to stay hopeful. But for now, athletes are at least back on the field.