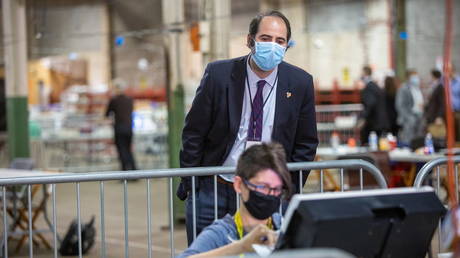 The Supreme Court of Pennsylvania has rejected allegations by President Donald Trump’s campaign team that election observers in Philadelphia were deprived of “meaningful access” to the polls, overturning a lower court’s ruling.

The state’s liberal-leaning Supreme Court ruled 5-2 against Trump’s lawsuit on Tuesday, rebuffing claims that local election officials barred Republican poll-watchers from standing close enough to the vote-counting process to see what was happening.

“We conclude the [Philadelphia County Board of Elections] did not act contrary to law… during the precanvassing and canvassing process, as the Election Code does not specify minimum distance parameters” for observers, the court said in its majority opinion.

Critically, we find the Board’s regulations as applied herein were reasonable in that they allowed candidate representatives to observe the Board conducting its activities as prescribed under the Election Code.

The decision went on to specify that poll-watchers are not meant to “audit” ballots, but merely to monitor the process neutrally, rejecting arguments from a key witness – Republican observer Jeremy Mercer – who said he was unable to inspect individual envelopes for “improper markings.” While a lower court previously found Mercer’s testimony “credible,” the new opinion said that he “had the opportunity to observe the mechanics of the canvassing process” in line with the law. It also vacated a prior ruling allowing observers to stand closer to the action, saying such decisions should be left with local elections boards.

In a separate case brought in a Pennsylvania federal court, President Trump’s personal attorney Rudy Giuliani on Tuesday similarly alleged “widespread, nationwide voter fraud,” including in the Keystone State. The hearing became contentious after Giuliani compared local Democratic officials to a “little mafia” that “stole an election.” A lawyer for the Allegheny County Board of Elections, Mark Aronchick, slammed the comments as “disgraceful” and accused Giuliani of living in a “fantasy world,” LA Times journalist Chris Megerian reported. The federal suit has yet to be decided, with a ruling still pending.

Mark Aronchick, a lawyer for the Allegheny County Board of Elections, is furious with Giuliani. He says he's living in a "fantasy world" and his allegations about election officials being in a "mafia" are "disgraceful."

Trump and his allies have repeatedly insisted the 2020 race was marred by widespread voter fraud, filing lawsuits across multiple states to contest the results. The president, meanwhile, has declined to concede to Democratic rival Joe Biden, who has been informally dubbed the victor by a number of media outlets. In addition to the alleged misconduct affecting observers, the Trump team has also taken aim at possible irregularities with mail-in ballots – heavily favored by voters this year amid an ongoing pandemic – and election software used to tabulate and report votes.

While none of the suits have handed major victories to Trump or offered compelling evidence for the purported fraud to date, a ballot recount in Georgia requested by the president has turned up more than 5,000 previously uncounted votes in two counties. However, state officials argued the overlooked ballots were a result of “human error,” rather than fraud. So far, Georgia’s second tally has handed about 1,300 new votes to Trump, still leaving him nearly 13,000 behind Biden in the state.