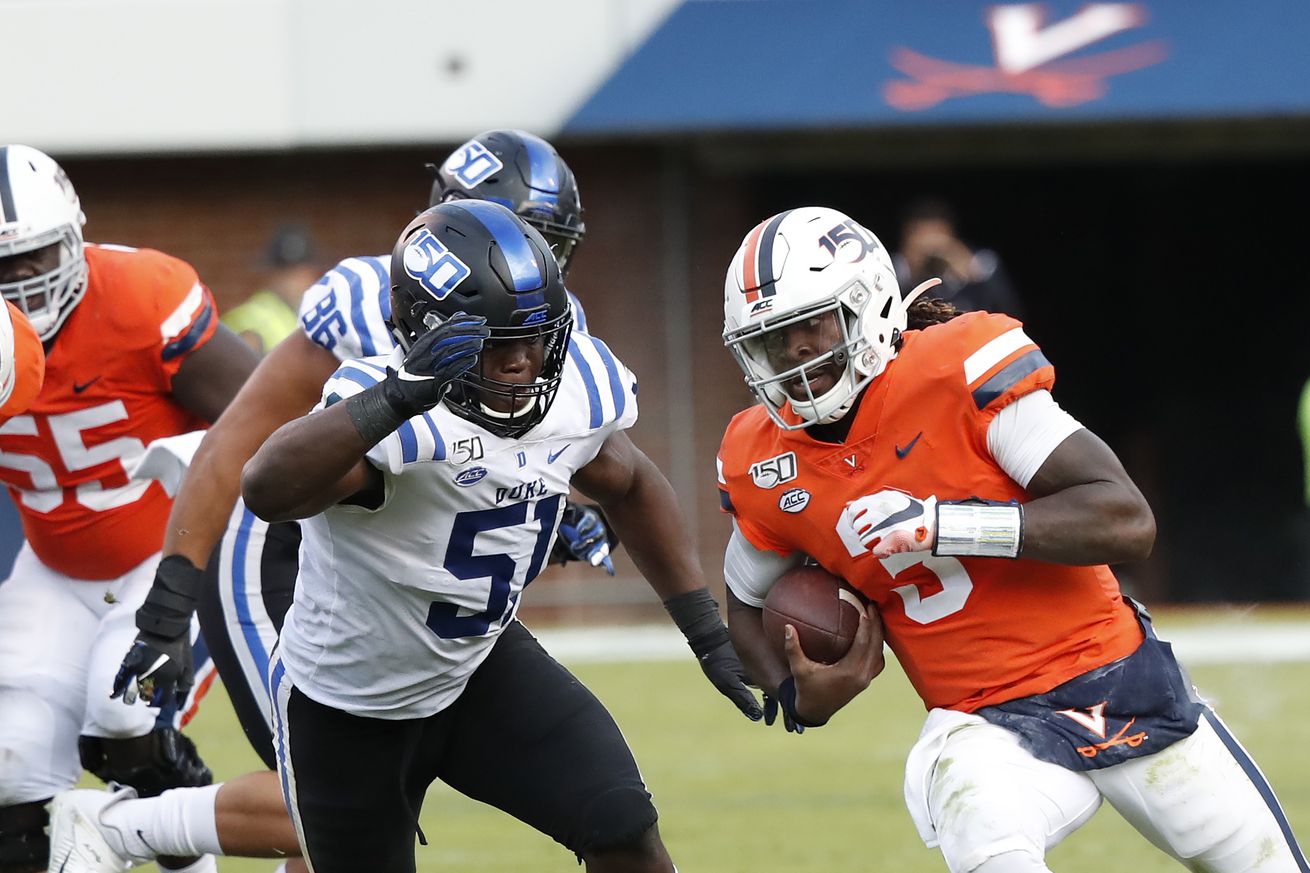 As the season begins to wind down

Duke had a bye week to look at itself in the mirror. David Cutcliffe told the media yesterday that his team had prioritized physicality in practice and Dimukeje and Bobo both addressed that emphasis

“I think the bye-week really helped us,” Dimukeje said. “Everybody came back locked in and ready to work. We focused on doing our jobs. We were disciplined the whole week and got after it. Coach Cut preached being physical and we practiced that all week. . . . It’s helped us out a lot. . . . The O-line and the D-line are going after it, the whole offense and defense. We’re taking these last three games serious.”

Bobo says being physical is more nuanced than simply lining up and trying to bash your opponent.

“Physicality has definitely been a point of emphasis last week and leading into game week this week. . . . Physicality is almost more a mental game. . . . receivers working fundamentals of blocking or linemen working schemes so they’ll be in the right place at the right time.”

“They’re a talented team and they play really hard. They have some good running backs, a good quarterback. They just find ways to confuse the defense. We just have to be disciplined, trust our defense and do our jobs.”

Hartman hasn’t thrown an interception this season but he has been sacked 23 times in seven games, suggesting some opportunities for Dimukeje, Chris Rumph and teammates,

“Sacks, tfl [tackles for loss], any havoc plays . . . we can make will really help us and put pressure on their offense.”

It’s hard to see Duke completely shutting down an offense that’s averaging almost 40 points per game. Duke will need to score points, lots of points. Fortunately the Wake defense has been vulnerable.

Bobo says the offense has noticed.

“UNC put a lot of points up on the scoreboard so obviously as an offensive player that leads you to believe that hopefully we can do the same thing.”

How does Duke accomplish that?

“For us [the emphasis] has been on making explosive plays. That’s something we’ve tried to do all year as a receiving group. I think we’ve undershot that a little bit, so far. And we’ve had turnover issues. So, we’ve worked a lot on that this week.”

Wake? Scoring points “is the goal going into every game. They’re athletic. Their secondary is young but they’re good. They’ll make plays. I think that has to be your mindset going into every game . . . You’ve got to score points. You can’t go in expecting to run the ball a little bit there, keep possession, run the clock, let our defense win us the game. As an offense you want to make plays and score as many points as possible. That’s how you plan on winning games. . . . We feel like as a group, we have a lot left.”

Wake’s defense does force turnovers-12 interceptions this season-and Bobo says the receivers need to do their job in minimizing that.

“We’ve just got to be on the same page. We’ve got to take care of Chase and whoever’s back there. We have to run our routes like he wants them. We have to run crisp, precise routes, we have to be on time because they’ll trigger, they’ll come downhill pretty fast and they’ll make plays on the ball. So, we have to do everything we can to help Chase. . . . . If that happens, everything else will fall in place.”

Dimukeje says he and the other senior leaders have conveyed a simple message to their team.

Why would Elon Musk move to Texas? The answer could be in the billions