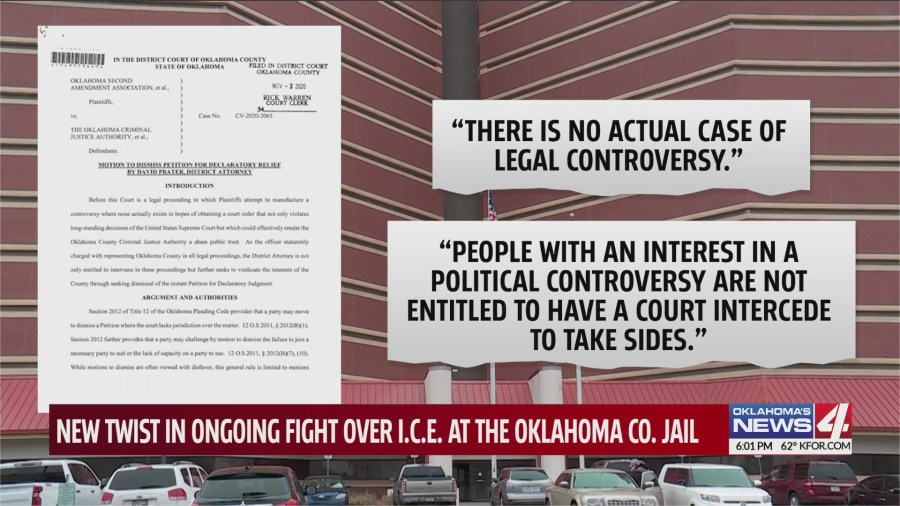 OKLAHOMA CITY (KFOR) -- The Oklahoma County Jail Trust has now filed a motion to dismiss a lawsuit filed against them by Commissioner Kevin Calvey, who then filed a motion to put the case on hold until next year.

“They’re getting a lot of money that they are not spending appropriately,” Oklahoma County Commissioner Kevin Calvey, District 1, told KFOR back in April of 2019.

That was after Calvey rushed a vote by the county commissioners to create a trust to take over operations of the county jail because he believed the Oklahoma County Sheriff's Office was "mismanaging" money, something Sheriff P.D. Taylor repeatedly denied.

"Calvey is a dangerous person. He does not know what he’s talking about," Taylor said back in 2019.

Now, over a year later, Calvey is at the center of another controversy with the trust he essentially created.

“We’re going to stand up for ICE here in Oklahoma County,” Calvey said back on October 5.

Calvey, through his private law firm, is now suing the trust, that he himself sits on, after a 4-2 vote by the trust to remove ICE agents from the jail.

The vote didn't count because it was lacking a five-person majority vote requirement. However, Calvey, with his lawsuit, is hoping to keep another similar vote from happening.

“If the judge says 'no' then we’re not a sanctuary state, you can comply with ICE detainers, like most counties do, then we would go ahead and that would be enforceable,” Calvey said on October 5.

About a week later, D.A. David Prater filed a motion to intervene in Calvey's lawsuit, writing, "The policy was not submitted for review or comment to the district attorney."

Prater continued, "The Board of County Commissioners ("BOCC"), and specifically any individual commissioner has never had direct operational control of the jail as a matter of law."

Prater then filed a motion to dismiss the case.

Then late last week, the trust also filed a motion to dismiss. It reads in part, "Although the county commissioners can certainly state their political views, the respondent here, the jail trust, was expressly created as a public trust which is independent of the BOCC."

The motion continues, "There is no actual case of legal controversy. People with an interest in a political controversy are not entitled to have a court intercede to take sides."

The same day, Calvey filed a motion to stay, which was released on Tuesday, asking the judge to pause the case until April 15, 2021, "to give the legislature time to enact legislation."

He then points to a press release from State Representative John Pfeiffer where Pfeiffer wrote he "intends to refile legislation that would require Oklahoma law enforcement to comply with ICE requests," which includes jailers.

“The bill protects Oklahomans and provides clarification and uniformity to our law enforcement officers,” Pfeiffer said. “This is greatly needed, as we have varying policies across the state causing our citizens great concern. Counties, especially in urban areas, are still struggling to use common sense compliance with ICE in jails. This bill makes it crystal clear that counties must follow the Rule of Law when it comes to immigration matters in the United States of America.”

Portugal to ease COVID-19 rules for Christmas, but not New Year