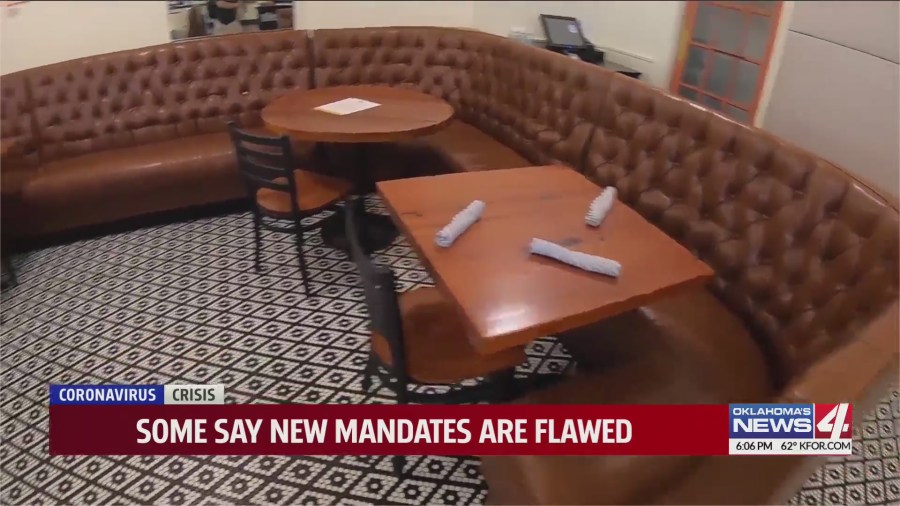 OKLAHOMA CITY (KFOR) - As local leaders have begged for help slowing the spread of COVID-19 in the community, Oklahoma Gov. Kevin Stitt says he is adding new restrictions to certain businesses.

On Monday, Stitt announced new COVID-19 restrictions that will go into effect later this week. Those restrictions include bars closing at 11 p.m. each night and keeping tables six feet apart in restaurants.

"Employees of bars and restaurants deserve more from their government. They need help," said Chad Whitehead, the talent buyer at Tower Theatre.

"I wish that we could close them all down for safety, but we can't do that unless the state government is willing to offer some support," said Whitehead.

However, he says bars especially could take a huge financial hit.

"Closing a bar at 11 o' clock doesn't seem like a big deal to those of us who may not be out that late but those are important hours for bars to collect revenue, so that definitely hurts," he said.

Dr. Dale Bratzler, OU Health's Chief COVID Officer, says he doesn't think closing bars and restaurants at 11 will help all that much.

"I'm not sure that's going to have much of an impact because there's plenty of opportunity for exposure before 11pm," said Bratzler.

He says keeping tables six feet apart is a step in the right direction.

"That potentially has the same impact of reducing capacity in restaurants, which has been recommended by the White House Task Force for some time," he said.

It's something Whitehead says a lot of restaurants have already been doing.

"I'm really frustrated with federal, state, and local leaders just trying to treat this like, 'Well if we just do this one thing, then everything else on the other side will be just fine.' That's really just not the case. It needs to be a more nuanced and more intense conversation about what businesses really need during this pandemic," he said.

As far as state employees wearing masks, Bratzler says it affects less than one percent of Oklahoma's population, but it will help with visitors coming and going from state facilities.

State Rep. Jason Lowe says it's something a lot of lawmakers have already been doing.

"It's not nearly enough. A mask mandate for state employees and state-owned buildings is not enough," said Lowe.

Gov. Stitt has repeatedly said he does not believe a statewide mask mandate would be enforceable.

Lowe says he plans to introduce legislation in February to get a statewide mask mandate passed.