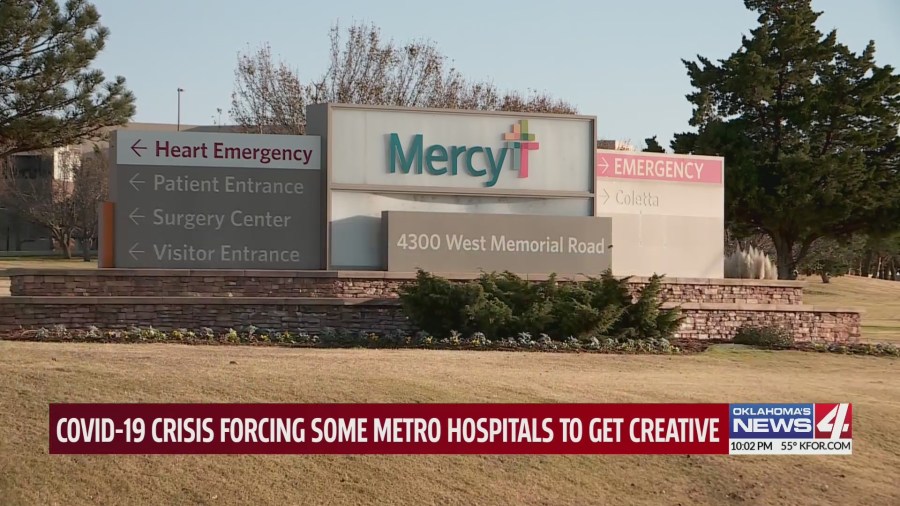 OKLAHOMA CITY (KFOR) – Several metro hospitals are walking KFOR through their next steps to create bed space as emergency rooms continue to remain full. Meanwhile, Tuesday, half of the state dipped into Tier 3 of the State Department of Health's hospital surge plan.

“It was horrifying," Dotti Jones said. "We didn't want to lose mom."

She and her sister are showing symptoms, her niece already tested positive for COVID-19 and her 74-year-old mother Dana was rushed to the hospital a week ago.

“We were trying to get as many prayers as possible," Jones said.

Thankfully, Jones tells KFOR after five days in the hospital, Dana was released to come back home.

However, according to Mercy Hospital, her bed was filled within minutes of her leaving.

“We are getting really close to where we are going to run out of resources," Chief Medical Officer at Mercy OKC Dr. Chad Smith said.

Like many other hospitals, Mercy officials say it's strained and feeling the pressure.

Smith tells KFOR he's even had to put patients on a waiting list.

“We may find ourselves in a situation where we literally cannot take care of patients who are seeking healthcare," Dr. Smith said.

With surging COVID-19 numbers in Oklahoma too high for contact tracers to keep up with, is it worth the cost?

Tuesday afternoon, half of the state dropped into Tier 3 of Oklahoma's four-tiered hospital surge plan. Mercy says it's trying to double their intake just to keep up.

“We are making a makeshift ICU in our post-holding area or our pre-surgery area," Dr. Smith said.

“I woke up with a heavy heart this morning," State Senator Carri Hicks said.

Hicks' district is in the heart of Oklahoma City where several hospitals confirm they are filled to the brim and are calling in on-call nurses and doctors constantly.

“Why do you think Governor Stitt and the state aren't putting more restrictions in when the numbers are overwhelming?” KFOR Reporter Peyton Yager asked.

“I understand the conversations on both sides," Senator Hicks said. "However, I think from history the economy will recover, but we will never know the economy of those lives lost.”

Meanwhile, Dotti says she is calling her family lucky.

“How many people have to be sent home or die or pass away because they don’t have doctors there?" Jones asked.

As of Tuesday, only 54 ICU beds are open across the state of Oklahoma.