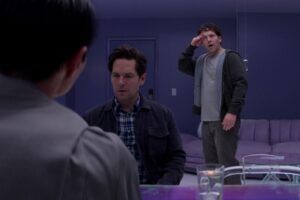 It must not be an easy feat to play your own twin, but a surprising amount of actors have done it. From Lindsay Lohan in “The Parent Trap” to Paul Rudd in Netflix’s “Living With Yourself” to Mark Ruffalo in HBO’s new series “I Know This Much Is True” here are 19 stars who have played their own twins, clones, and even split-personalities on TV and in movies.

Lindsay Lohan – “The Parent Trap,” “I Know Who Killed Me” Pretty much everyone is familiar with Lohan’s iconic role in ‘The Parent Trap’ remake, but few are familiar with her much more grown-up, darker role in this 2007 psychological thriller in which her she plays two very different versions of a girl named Aubrey Fleming.

Mark Ruffalo – “I Know This Much Is True” He plays twins Dominick and Thomas Birdsey in the HBO series, the latter of whom is schizophrenic.

Armie Hammer – “The Social Network” Who could forget Hammer’s turn as another pair of real-life twins? He played both Cameron and Tyler Winklevoss, A.K.A. “The Winklevii,” in this 2010 drama starring Jesse Eisenberg as Facebook founder Mark Zuckerberg.

Nicolas Cage – “Adaptation” Cage stars opposite himself — and Meryl Streep — in this 2002 Spike Jonze film about a struggling screenwriter and his freeloading twin brother.

Paul Rudd – “Living With Yourself”

When Rudd’s character accidentally gets himself cloned, he decides to let the other version of himself do the heavy lifting in their shared life. Everything is fine until his wife, and pretty much everyone else in his life, starts liking his clone more than the real him.

Chan plans twins who were separated at birth in this 1992 action-comedy.

Leonardo DiCaprio – “The Man in the Iron Mask”

Leo plays both King Louis XIV and his villainous brother, Philippe, in this 1998 film based on the story of “The Three Muskateers.”

Bale plays a magician with a big secret. Spoiler alert: Bale’s character is actually just pretending to be a master magician when really his twin brother is helping pull off the tricks behind the scenes.

The comedian dressed up as the female version of himself for this 2011 comedy about a twin sister who comes to stay with her brother’s family.

Davis plays twins Margaret DeLorca and Edith Phillips in this 1964 thriller. Both sisters are in love with the same man, and they’ll go to crazy lengths to sabotage each other.

Norton plays twins Brady and Bill in this 2009 comedy. Bill, believing Brady is dead, goes to Oklahoma — only to get roped into Brady’s drug-dealing scheme.

Tomlin and Midler play two sets of identical twins who are separated at birth and swapped, so they grew up believing they’re actually fraternal twins from different families. To make it even more confusing, both sets of twins have the same names.

In order to explain why Kudrow had a role on both “Friends” and “Mad About You,” which aired back-t0-back on Thursday nights, they did a little crossover in which they had Kudrow’s character Ursula the waitress from “Mad About You” come on “Friends” as Phoebe’s twin sister.

Simmons plays both versions of Howard Silk from alternate realities in this spy series from Starz, which was tragically canceled after just two seasons.

Ok, so not exactly twins, but McAvoy plays Kevin — and all 23 of his wildly different and terrifying personalities — in this 2017 horror thriller.

Doug decides to clone himself not once but four times in order to get more things done between his job and his family life.”

Spoiler alert: In this 2018 dark comedic thriller, Lively’s character kills her twin sister by drowning her in a lake.

James Marsden – “Dead to Me”

Spoiler alert for those who haven’t seen Season 2: Steve has an identical twin named Ben. And he’s way nicer — and way dorkier — than Steve. But lucky for Marsden, he never has do scenes where both twins are in the same room because Steve is, you know… dead.

Jim Carrey – Me, Myself and Irene

Okay, so this isn’t exactly a by-the-book twin situation, but it’s like he has an evil twin in the same body. Charlie suppressed his anger for so many years that he develops advanced delusionary schizophrenia with involuntary narcissistic rage… A.K.A., his alternate personality, Hank.

All the Broadway Shows Killed (and Postponed) Due to Coronavirus Shutdown

Paul Manafort Sprung From Prison Early Due to Coronavirus Concerns