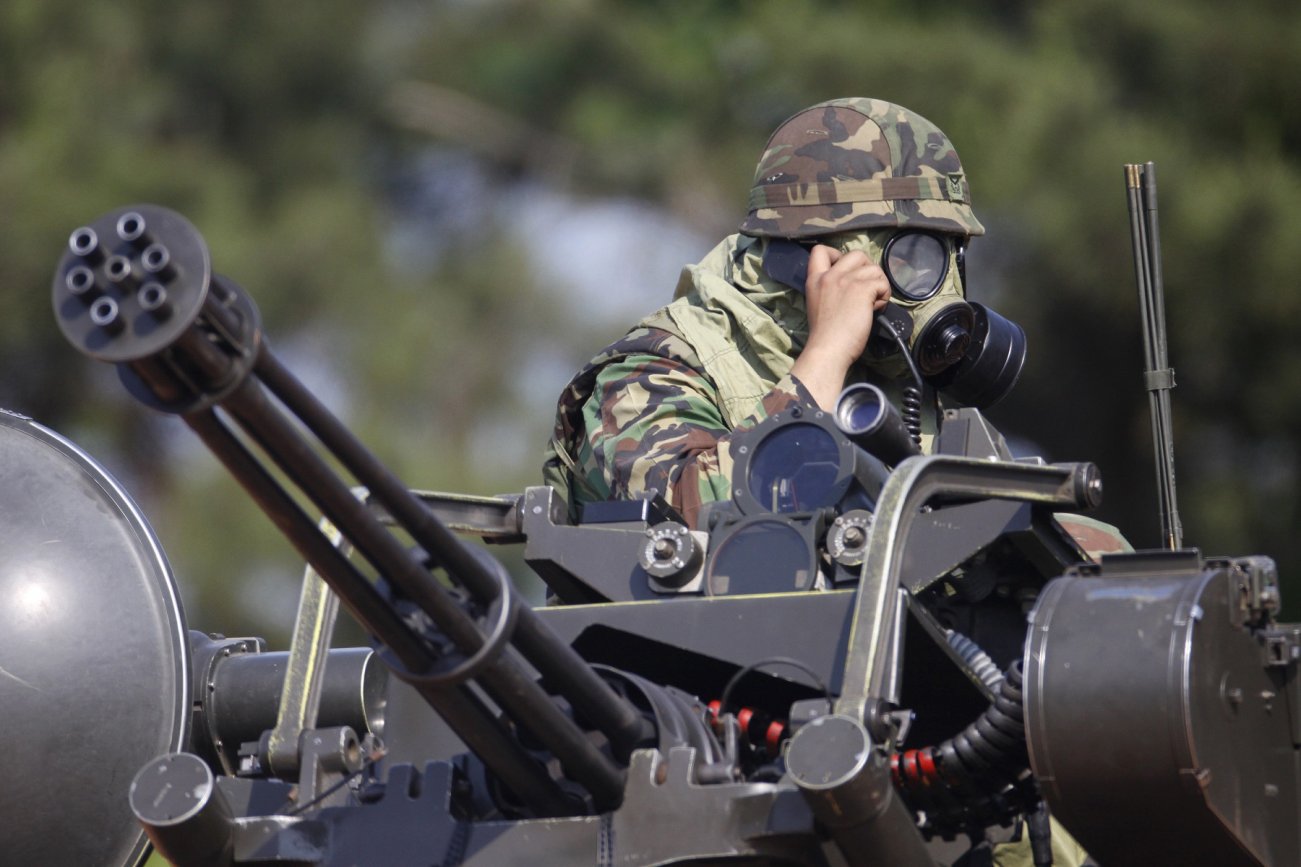 The South Korean Ministry of National Defense estimated in 2012 that North Korea had a stockpile of between 2,500 and 5,000 metric tons of chemical weapons. Annual production is estimated at 4,500 tons in peacetime and 12,000 tons in wartime.

Here's What You Need To Remember: The threat from chemical weapons is particularly insidious because they are much easier to store and to launch than nuclear weapons - and, over the past seventy years, North Korea has accumulated enough of them to make any attempt to pre-emptively destroy them pointless.

In recent years, North Korea’s chemical weapons have taken a backseat to her nuclear weapons. They are, however, no less dangerous. The deterioration of the Korean People’s Army (KPA) makes them more essential to victory than ever before. For both practical and doctrinal reasons, North Korea will almost certainly use chemical weapons in wartime, from riot control to lethal nerve gases.

Chemical weapons will be used to create a local, tactical advantage on the front lines and neutralize some advantages, such as air power. Thanks to North Korea’s prodigious missiles and artillery, they can be employed beyond the battlefield as well. North Korea will likely attack South Korea (ROK) through its depth with chemical weapons, from the Demilitarized Zone to Busan.

The vast number of delivery systems would make shutting down the KPA chemical threat impossible during wartime.

North Korea parses weapons of mass destruction into different usage categories. Nuclear weapons are a strategic deterrent meant to guarantee the security of the Kim dynasty. Northern nukes likely have no operational role in a wartime scenario, since their usage would cause South Korea and the United States to topple the North Korean government.

Chemical weapons, on the other hand, do have an operational role. North Korean military forces train to operate in a chemical environment on a regular basis, and North Korea manufactures its own chemical protective gear and detection systems, some of which have been found bound for Syria.

Chemical weapons would be used in a number of ways, but the primary goal is the suppression of enemy defenses, allowing the KPA to overcome ROK and U.S. forces. Troops fight less effectively when in chemical protective gear, and defenses are dispersed to mitigate the effects of chemical attack.

North Korea has a wide spectrum of agents to choose from, and would be expected to tailor its use of chemical agents to the specific task at hand. The effects of these weapons range from temporary incapacitation to death.

The South Korean Ministry of National Defense estimated in 2012 that North Korea had a stockpile of between 2,500 and 5,000 metric tons of chemical weapons. Annual production is estimated at 4,500 tons in peacetime and 12,000 tons in wartime.

North Korea is thought to have chemical weapons from the principle five categories: riot, choking, blood, blister and nerve agents. Riot-control agents are thought to be Adamsite (DM), CN and CS gases. Riot agents and so-called “tear” gases are meant to disperse crowds and are generally nonlethal to healthy adults.

North Korea is also thought to have so-called choking/pulmonary agents, gases that act upon the respiratory system. Short-term exposure requires hospitalization; prolonged exposure is lethal. The KPA is thought to have access to both chlorine-gas and phosgene choking agents.

So-called blood agents, which act through exposure to the human bloodstream, include hydrogen cyanide and cyanogen chloride.

North Korea also has mustard gas, a blister agent, which irritates skin and mucus-production areas, such as the eyes and nose.

According to longtime analyst Joseph Bermudez, North Korea is believed to have specialized in “sulfur mustard, chlorine, phosgene, sarin and the V-agents.”

North Korea has a multitude of ways to deliver chemical weapons to targets, ranging from long-range missiles to commandos. Pyongyang will have the ability to attack targets in South Korea and beyond, from locations not just near the DMZ, but theoretically as far as the Russian and Chinese borders.

An important factor to consider in this discussion is the relatively short ranges involved in-theater. The Korean peninsula is relatively short; from Hyesan on the North Korean/Chinese border to the southern tip of South Korea is less than 500 miles, or the distance from Portland, Maine to Baltimore, Maryland. Pyongyang to the DMZ is only 100 hundred miles and only 120 miles to Seoul.

Rockets and missiles are one way North Korea could deliver chemical weapons and have the longest reach. As of 2014, the U.S. Department of Defense estimates North Korea has less than one hundred short-range missile launchers of all types, including the Toksa/KN-02 Viper (a derivative of the Russian SS-21 Scarab) with a range of 75 miles, and its collection of Scud missiles, with a maximum range of 185 to 625 miles. Toksas and Scuds would have to be based close to the border.

North Korea also has less than fifty launchers for its No Dong missiles. Developed using Scud technology, No Dong has a range of 800 miles, making it useful for striking from deep inside North Korea against South Korea and Japan.

The North Korean People’s Air Force is capable of delivering chemical weapons by air, but its aging fleet of airplanes are less reliable and less likely to get through South Korean defenses than other means. They will also be heavily in demand for conventional missions. Nevertheless, it has eighteen Su-7BMK “Fitter” and thirty-two Su-25 “Frogfoot” aircraft that could carry out chemical strikes.

North Korea’s large number of special forces and their importance to any war plan make it likely they would work with chemical weapons to some extent. Trained in infiltration techniques, North Korean infiltrators could be used to deliver chemical weapons or exploit the chaotic aftermath of a chemical attack.

There may be ways North Korea plans to disseminate chemical weapons that remain undiscovered. Chemical agents could be delivered by submarine or drone. North Korea could even use new, undiscovered tunnel systems to launch chemical attacks behind South Korean lines.

North Korea will use chemical weapons to alter the correlation of forces the way other countries use high technology. The most important targets would be South Korean forces directly across the border, manning the country’s impressive border defenses. Attacks such as these in support of a ground offensive would seek to break through and facilitate the push on Seoul and beyond.

Air bases would be key targets for chemical strikes, as shutting them down, even temporarily, would negate the tremendous advantage the United States and South Korea have in terms of air power. Daegu Air Base, home of the Republic of Korea Air Force’s F-15K fighter bombers, and the American bases of Kunsan and Osan would likely be hit hard by North Korean missiles.

South Korean ports, such as Busan, will also be the targets of strikes, as these will be the nodes through which American reinforcements will flow. Chemical weapons could be used against ROK Army reservist depots, delaying the firming up of reinforcements for the front.

North Korean Special Forces could even use chemical weapons against civilian targets. Attacks on politicians, infrastructure and other high-value civilian targets could cause panic and a loss of confidence in the government. Attacks similar to to the 1995 sarin gas attack in Tokyo, Japan could lower civilian morale and cause panic. A panicked civilian population will create serious problems, as civilians clog the roads attempting to flee the fighting.

Finally, U.S. facilities in Asia beyond the Korean peninsula will come under chemical attack. Chemical attacks on Kadena Air Base, Misawa Air Base and Yokota Air Base in Japan would staunch the flow of U.S. airpower into the region. (There is little downside to attacking Japanese territory, since the Japanese do not have offensive weapons.) Similarly, attacks on facilities at Yokosuka, Atsugi and Sasebo would target U.S. Navy forces. Guam, a base for American submarines and bombers, is in reach of longer-range North Korean missiles, such as Taepodong.

Would North Korea chance using chemical weapons? The deterioration of the conventional North Korean military makes the use of gas more necessary than ever. The KPA has few “force multipliers” to enhance its effectiveness on the battlefield and even fewer that only it alone would use.

It’s long been thought that chemical-weapons use would invoke “massive retaliation” by the United States and South Korea. However, short of employing nuclear weapons, the latter powers will already be using everything at their disposal to defeat a KPA invasion force. From the North Korean point of view, as long as the nuclear threshold is not crossed, there’s little political downside to using chemicals.

The failure of the West to respond to chemical use in Syria has shown that warnings about “red lines” and the use of gas are hollow. There are great differences between gassing Syrian civilians and American troops, but it’s clear that some of the taboo of using chemical weapons has worn off.

North Korea’s chemical-weapons threat is real and the likelihood of their use in wartime is high. Once war is underway, the best way for U.S./South Korean forces to mitigate their effects would be to degrade North Korea’s command and control and take the offensive. If the NK general staff is unable to send orders and receive accurate intelligence, it will find it difficult to plan chemical strikes. A fast-moving UN offensive may also catch slow-moving artillery and missile units.

The most effective means overall of mitigating Pyongyang’s chemical threat may be to bargain the weapons away ahead of time. If the North could be persuaded to give up most or all of its chemical weapons, it would lessen the threat to civilians and soldiers in wartime, both on the Korean peninsula and abroad. That would involve talking to North Korea, something the Obama administration has not been too interested in doing. If the world wishes to do away with North Korea’s chemical weapons, it needs to start talking to the reclusive country now.

Kyle Mizokami is a writer based in San Francisco who has appeared in The Diplomat, Foreign Policy, War is Boring and The Daily Beast. In 2009 he cofounded the defense and security blog Japan Security Watch. You can follow him on Twitter: @KyleMizokami.This article first appeared in March 2015.

‘Sugar Factory Karen’ refuses to wear mask, says her brother will come back for revenge