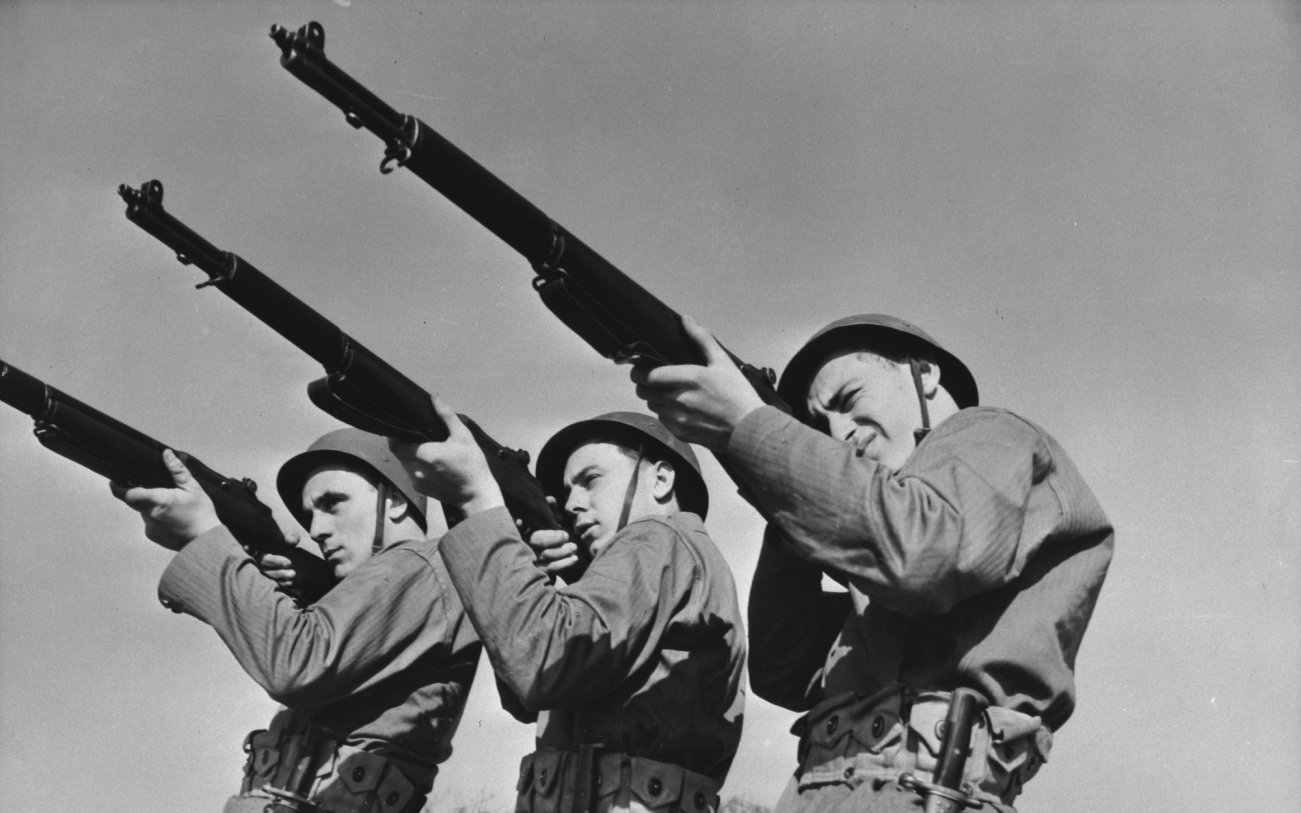 Over the past eighty years, several military firearms have revolutionized infantry combat.

Here's What You Need to Know: These five weapons made the battlefield as deadly as it is today.

The field of military small arms is an underappreciated but important one. Although not as sexy as nuclear weapons, fighter jets or tanks, battle rifles, assault rifles, and machine guns have killed far more people and been involved in the forced transfer of more real estate than any other weapon—particularly in the so-called Third World.

Over the past eighty years, several military firearms have revolutionized infantry combat. Modern manufacturing techniques, combined with advances in polymers, metallurgy and metalworking technology, have created lightweight and accurate weapons. Likewise, visionaries such as Russia’s Mikhail Kalashnikov and America’s Eugene Stoner have produced innovative, reliable designs. Here are five weapons that made the battlefield as deadly as it is today.

World War II Germany was the first country to see value in a weapon smaller than a battle rifle that fired a lightweight cartridge at full auto. The German army, fighting masses of Soviet infantry on the Eastern Front, sought a weapon that could shoot faster from a larger magazine than the Karabiner 98k bolt action carbine, but fired a more powerful round farther than the MP-40 submachine gun.

The result was the MP44. Originally developed along the lines of a submachine gun, (the MP stood for maschinenpistole, or machine pistol), the MP44 fired 7.92x33 kurz from a thirty-round magazine. The MP44 could fire semi-automatic or fully automatic at rates of up to 600 rounds per minute. It had the appearance of a rifle with a large, curved magazine, shortened buttstock and pistol grip.

As the MP44 evolved, it became clear that it was not quite a carbine and not quite a submachine gun—but something entirely new. In 1944 it was designated Sturmgewehr-44, or StG 44. The StG 44 eventually became known as the first of an entirely new breed, the assault rifle.

The Soviet Army, aware of the StG-44’s existence, wanted an assault rifle of its own. Red Army Sgt. Mikhail Kalashnikov, a tanker wounded in the Battle of Bryansk, was fatefully diverted to the field of weapons design and came up a new assault rifle. His creation, like the StG44, used a lighter cartridge and a thirty-round magazine. The weapon was accepted into Soviet service in 1947 and became known as the Avtomat Kalashnikova 47, or AK-47.

The AK-47, although not the first assault rifle, was certainly the most influential. The AK-47 used the lighter 7.62x39mm round, which made the weapon more controllable when shooting in full auto. Unlike other fully automatic weapons of the time the AK-47 was simple to disassemble. It was made from stamped metal and other easily produced parts, so that countries with little manufacturing base—such as Albania, Cambodia and Sudan—could build their own copies. The AK-47’s simplicity and reliability helped terrorists and guerrillas operating in primitive conditions keep their weapons serviceable, and the AK has served prominently in most, if not all, wars of national liberation. Today the design soldiers on, with the Russian army fielding the newer AK-74M and, increasingly, the brand new AK-12.

The original M16 rifle was a wonder weapon that, once adopted for army use, quickly developed a reputation for being unreliable. It started off well enough: in 1956, Eugene Stoner patented a design for a direct impingement rifle that used gunpowder gasses to cycle the weapon. This simple design, the use of aluminum for the upper and lower receiver and plastic for the pistol grip and buttstock, resulted in a very lightweight weapon. The AR-15 had a maximum rate of fire of 750 round per minute and the 5.56mm bullet achieved muzzle velocities of up to 3,300 feet per second.

The new weapon, redesignated the M16, earned a reputation in Vietnam as being lighter and easier to carry than the older M14 rifle. From a logistical perspective, the same number of 5.56 rounds weighed substantially less than the 7.62mm rounds used by the M14. Unfortunately, a change in gunpowder and an unfounded belief that the weapon did not need cleaning caused many stoppages and problems on the battlefield. Nevertheless, once fixed the M16 became a highly effective assault rifle. Its pioneering use of plastics and aluminum has virtually assured that future weapons—particularly in the West—were correspondingly lighter and easier to handle. Today descendants of the original M16 like the M16A4 and M4A1 carbine are still in service with the U.S. Army and Marine Corps.

The MG34 was one of the first lightweight, belt-fed general purpose machine guns. The light machine gun was designed by Mauser and built for a rearming Germany in the 1930s. Due to restrictions on the size of the German army the MG34 was built in relatively small numbers, and factories could take their time and build with precision. The result was a machine gun that was built like a watch and reportedly took more than 100 hours to build.

The MG34 had several features that made it a revolutionary machine gun. It had a quick change barrel for rapid replacement during combat conditions, it was easy to field strip, air cooled, and fired at a rate of 800 to 900 rounds per minute. It fired fifty-round belts that could be linked to form one long 250-round belt, a fifty-round drum or a 750 round saddle drum. Best of all, it was lightweight, weighing “only” twenty-six pounds (it replaced the forty-pound MG08 machine gun).

All of these features combined to create a weapon that was the centerpiece of a German army infantry squad. Each squad had one MG34, which could act as a base of fire for attacks and bolster infantry defenses—a concept that many European armies embraced for decades after World War I. The American, British and Soviet armed forces had nothing like it at the squad level, with the closest Allied analog being the Bren light machine gun. A later version, the MG42, was nearly identical but made of stamped parts to speed wartime construction.

The M1 Garand rifle was the first semi-automatic rifle issued at the squad level in any army. Although a trained infantryman could wield quickly empty the five-round magazine of an Arisaka or Karabiner 98k rifle, working the bolt was an unwanted distraction in combat, particularly while moving. An American GI, on the other hand, could fire off eight quick shots before running out of ammunition.

The M1 was a semi-automatic weapon chambered in .30-06 Springfield. An internal magazine was fed from an eight-round clip. The clip was inserted into the magazine from above, and once empty was automatically ejected from the rifle. The Garand utilized a long-stroke gas piston design that is believed to have inspired the operating system on the AK-47.

This article first appeared in 2018.

Blind widow: Man of God helped me after church threw me out of home