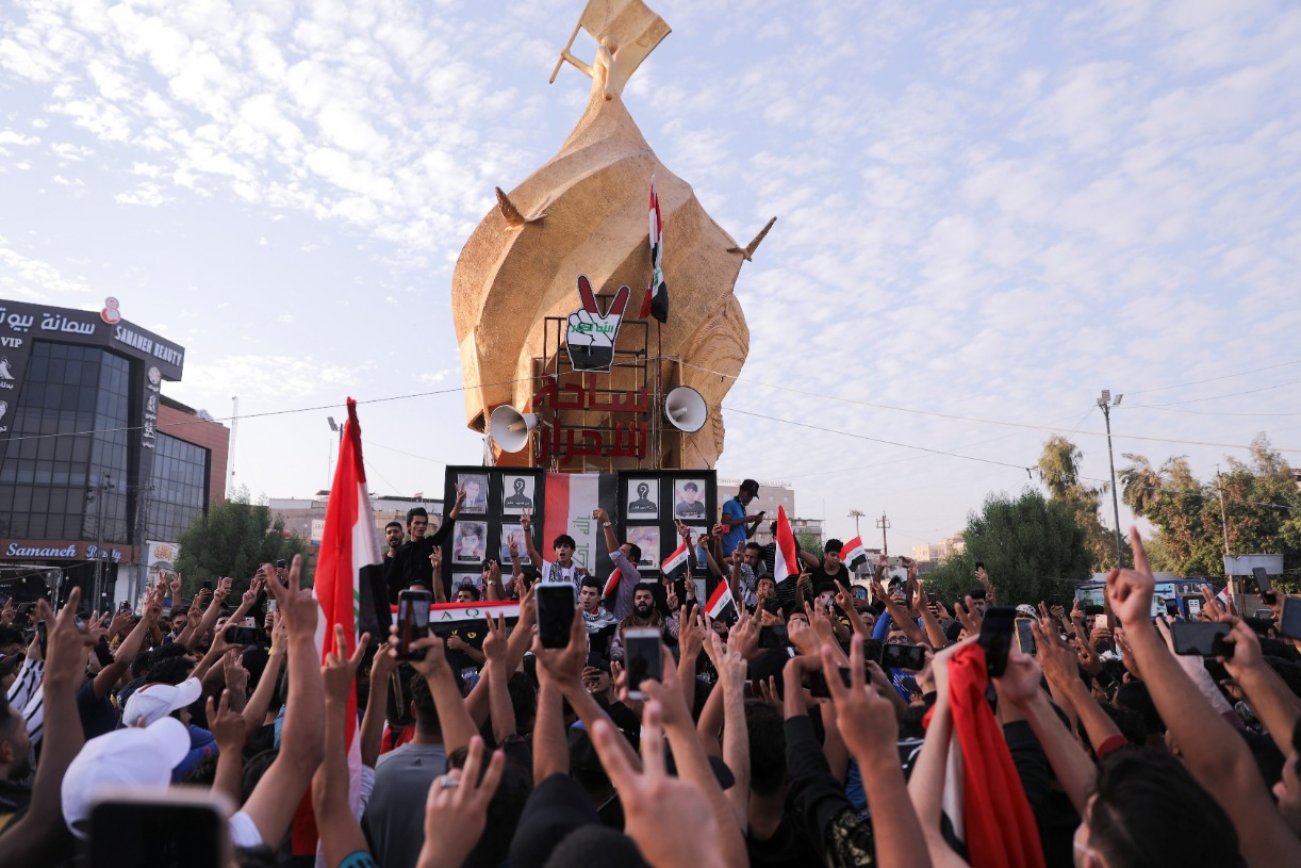 Resilient civil society leaders—seeking a more just country even after decades of sanctions, war, intervention, corruption, and poor governance—are the brightest hope for Iraq’s future and their efforts must be protected.

Nearly a decade after the Arab Spring began in Tunisia, a new wave of popular protests swept across the Middle East and North African region in the fall of 2019, re-exposing long-simmering angst related to a lack of economic opportunities and political freedoms. Though in many ways the region has changed at a breakneck pace since 2011, trust between the people and their governments in Lebanon, Algeria, Iraq, Egypt, and elsewhere is more corroded than ever. The case of Iraq illustrates this legacy: the government is failing to protect the fundamental freedom of assembly and is unable to ensure accountability for attacks against leading civil society activists involved in the latest protest movement.

Beginning on October 1, 2019, cities across Iraq—including the capital of Baghdad—erupted in protests of hundreds of thousands calling on the government to address economic mismanagement, corruption, and the need for political reform (including curbing the influence of Iranian-backed militias). Compared with some past iterations of unrest, these were extremely unified, with many led by Shia Muslims seemingly turning against the Shia-dominated political order that emerged post-2003. Despite the mostly peaceful nature of the protests, Iraq’s security forces and affiliated Iran-backed Iraqi militias responded with excessive and lethal force to disperse the protesters, some using military-grade tear-gas grenades. Even after the demonstrations prompted the November 2019 resignation of Prime Minister Adel Abdul Mahdi’s government, security forces continued to use excessive force, firing live ammunition, setting fire to protestors’ tents, and detaining activists. By March of 2020, CIVICUS reported that over 700 people had been killed and 2,800 arrested since protests began; as of writing, suppression of protests continue to demonstrate the government’s failure to uphold Article 38 of the Iraqi Constitution and to abide by customary international law on the use of force against protestors.

In addition to this disproportionate response, security officials and non-state actors have employed intimidation, mass arrests, and targeted assassinations against leading activists, journalists, and even physicians that have anything to do with the protests. Some of the earliest assassinations, in November of 2019, were of writer Amjad Al-Dahamat, who was killed on the street, and of Hussein Adil and Sara Talib, married human rights defenders who were killed by unidentified gunmen in their home. More recently, in August and September 2020, activists Tahseen Osama, Reham Yacoub, and Sheelan Dara Raouf were killed. Journalists have also come under attack, including Ahmed Abdul Samad, Safaa Ghali,  and Nizar Dhanoun, who were shot and killed in early 2020. Kidnappings of activists, journalists, and lawyers are also common.

Authorities have continuously targeted media outlets and enacted internet blackouts, hampering documentation efforts, and the free flow of information. At the same time, activists and demonstrators continue to face trumped-up charges under Iraq’s Anti-Terrorism Law. The intensity of this onslaught is forcing activists to either flee the country or abandon their causes. In seeking to represent citizens’ demands, they have become caught in the crosshairs of the government and those with vested interests in maintaining the status quo. In May 2020, Prime Minister Mustafa al-Kadhimi promised accountability for excessive use of force by security forces. Nonetheless, impunity remains rampant: as Human Rights Watch has reported, no senior commanders have been prosecuted, and only a few commanders and low-level members have even been investigated.

Recent Iraqi history demonstrates the risks of suppressing protests. When the Arab Spring came to Iraq in February 2011, thousands protested in Baghdad’s Liberation Square against the Shia Nouri al-Maliki government (2006-2014). Weekly demonstrations calling for the resignation of al-Maliki spread from Mosul to Basra. Protestors often clashed with police, most notably on the “Day of Rage,” when many protestors were killed and injured. Protests continued into the following years, often with excessive force from the security sector. This suppression led to increased radicalism in Iraq and in Syria, contributing to the rise of the Islamic State (IS).

This rise of IS also contributed dramatically to the government’s failure to maintain a monopoly on the use of force, which is now, in turn, guaranteeing impunity for non-state actors who assault civil society leaders. This is because Iran-backed militias found greater success in pushing IS back than the Iraqi government. As a result, many became part of the state security apparatus, receiving salaries and weapons from the government. They also earned the support and appreciation of many Iraqis for their contribution. It is difficult to overstate the power of these militias. Recent comments from one of Kadhimi’s advisers, on the prime minister’s view of a recent assassination of another close adviser, illustrates how constrained the government is: “He wants justice, but his hands are tied. Launching a full-blown investigation into why this happened, well, that is simply too dangerous for any prime minister here.”

As history shows, excessive use of force against protests will only heighten grievances, and impunity for attacks against civil society will further threaten rule of law and trust between citizens and their government. If both trends continue, they will create not only further impetus for protests, but also opportunities for sectarian forces to sow animosity and disorder.

The sort of institutional reform required to hold security forces accountable and diminish the power of Iran-backed militias requires long-term vision, necessitating significant commitment and resources in the face of enormous political costs that could include loss of life. With this in mind, the United States—through congressional appropriations to the Departments of State and Defense—should consider working with the Iraqi government to implement a conditional framework for security assistance, requiring benchmarks around both rules of law and accountability for increased quantities and forms of assistance in order to better protect civil society leaders and shape broader political and security outcomes.

Further, countries that have provided military and law enforcement training and support to Iraq should end this assistance to any Iraqi units that are involved in serious violations until they are held accountable and violations cease. For the United States, this requirement is already entrenched in the “Leahy Laws.” Until significant security reform is achieved, any nation that wishes for stability and a modicum of respect for human rights in the region should identify ways to prevent further escalation by supporting Iraqi civil society as they continue to practice their rights to speak out and mobilize. These governments must speak out against these attacks—and should also consider providing Iraqi civil society with funds to ensure their safety. These resilient civil society leaders—seeking a more just country even after decades of sanctions, war, intervention, corruption, and poor governance—are the brightest hope for Iraq’s future and their efforts must be protected.

Colleen Scribner is Program Officer at the Lifeline Fund for Embattled CSOs at Freedom House and the 2020 Human Rights Fellow at Young Professional in Foreign Policy. She has previously held positions at the Public International Law and Policy Group, the Office of the U.N. High Commissioner for Refugees, the International Foundation for Electoral Systems, and the Global Fund to End Modern Slavery. She holds an M.A. in Global Governance, Politics, and Security from American University’s School of International Service and a B.A. in Diplomacy and World Affairs from Occidental College.

AOC raised $200,000 for charity on her 'Among Us' Twitch stream Friday