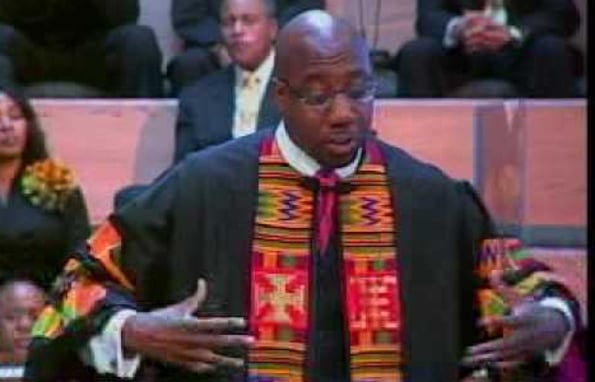 With all eyes on Georgia as it prepares for a runoff election that likely will determine which party controls the Senate, the radical background of Democratic candidate Rafael Warnock has come under close scrutiny.

Already, the campaign of Republican incumbent Kelly Loeffler has seized on Warnock's condemnation of "whiteness" from the pulpit and his former church's hosting of Cuban dictator Fidel Castro.

Now, video has surface of Warnock declaring in a 2011 sermon that Americans cannot serve God while also serving in the U.S. military, the Washington Free Beacon reported.

The Free Beacon noted Georgia is home to the fifth largest active duty military population in the country.

"America, nobody can serve God and the military," Warnock said in the sermon at Ebenezer Baptist Church in Atlanta, where he serves as senior pastor. "You can't serve God and money. You cannot serve God and mammon at the same time.

Warnock was an associate pastor at a church in New York City when it hosted and enthusiastically celebrated Cuban dictator Fidel Castro in 1995. Warnock's campaign has argued he was a junior member of the staff at the time and was not a decision-maker. However, the church also hosted Castro in 1960. And Warnock has refused to say whether or not he attended the event. The Miami Herald reported at the time that Castro "blast[ed] the United States with the vigor that was missing from his speech to the United Nations earlier in the day and winding up the evening with a rousing rendition of the socialist hymn Internationale."

Head pastor Calvin Butts can be seen in C-SPAN coverage of the event praising Castro, prompting chants from the audience of "Fidel! Fidel! Fidel!"

The Free Beacon said Warnock's campaign did not respond to a request for comment.

The post Georgia Senate candidate: 'Nobody can serve God and the military' appeared first on WND.