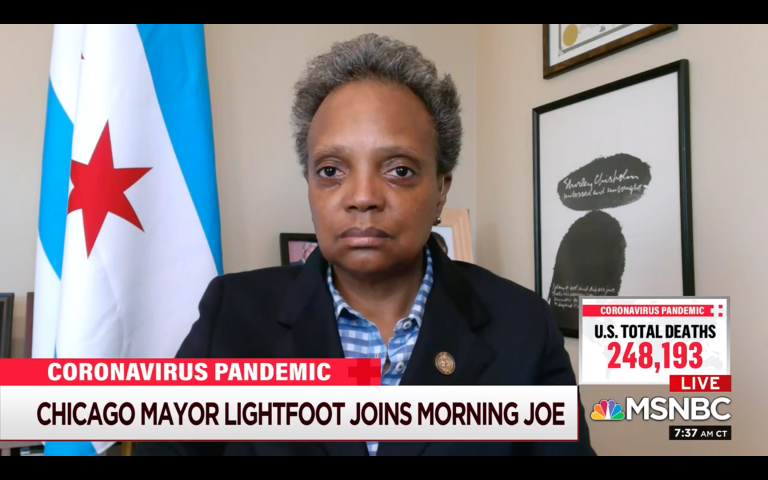 Chicago mayor Lori Lightfoot (D.) on Tuesday urged Chicagoans to stay home and avoid large crowds one week after she participated in a large rally celebrating the election of Joe Biden.

"We are urging people to stay home, to not be in large crowds, to wear face coverings, and really take responsibility for their own lives, for the lives of their family members and for the lives of other people in the city," she said on MSNBC's Morning Joe. "We have to rise above the me and get to the we. We have a larger obligation to each other that we have got to get to."

Lightfoot's stay-at-home advisory comes just one week after the mayor went maskless into a large crowd of Biden supporters and told them, "You should absolutely celebrate this victory and savor every minute of it." She defended the gathering by claiming on MSNBC last week that all attendees were wearing masks—which her own Twitter video disproves—and faced no pushback, even as she used the interview to tell citizens not to meet in "private places." She also said traditional Thanksgiving plans should be canceled.

Lightfoot is not the only Democratic leader who has shown disregard for coronavirus restrictions. California governor Gavin Newsom (D.) attended a lavish dinner party with a top lobbyist this month, which he apologized for Tuesday. Speaker of the House Nancy Pelosi (D., Calif.) also sparked controversy in August by flouting coronavirus restrictions to get her hair done, excusing herself by saying it was "a setup."

The Most Unusual Murder Weapons in Crime Fiction

Frontier music teacher makes the most of remote learning