UK Parliament Member Damian Collins has been pushing dangerous nonsense about social media content moderation for a while now. A couple years ago he held a theatrical hearing on fake news that was marred by the fact that Collins himself was spreading fake news. Last year, he announced incredibly dangerous ideas about "stopping fake news" on websites.

And now he's doing something even stupider. According to the Financial Times, Collins is working with Boris Johnson on forcing a "duty of impartiality" on websites, saying that they cannot moderate political content:

Downing Street is pushing for big tech companies to be subject to a “duty of impartiality” to prevent political bias as part of legislation to regulate dangers on the internet.

How the fuck would that work in practice? Not well, I imagine. And then Collins decided to make it worse. Responding to a question from Jeff Jarvis on Twitter about this "duty of impartiality," Collins uttered what might be the stupidest thing I've ever seen a politician utter regarding content moderation (and we've seen a lot of stupid things said): 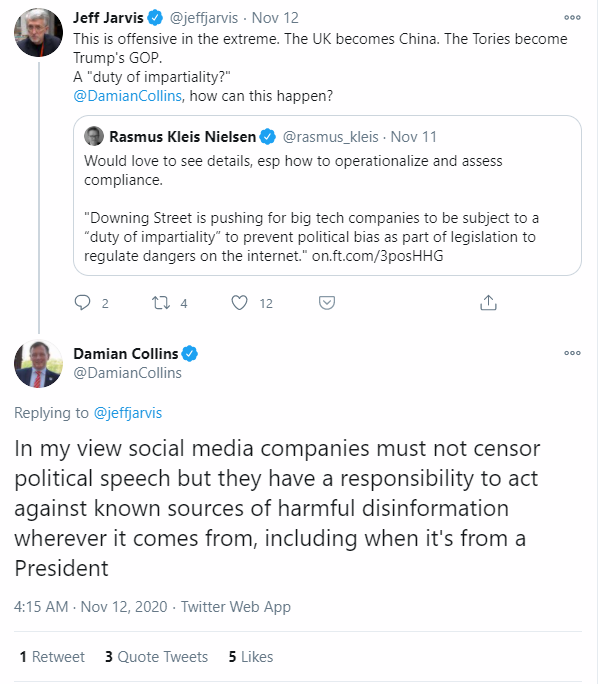 In my view social media companies must not censor political speech but they have a responsibility to act against known sources of harmful disinformation wherever it comes from, including when it's from a President

Hell, I'd argue that Collins' idea that this is easily distinguished is, in itself, "harmful disinformation." Should Twitter remove it? Or is that political speech.

Basically, what this comes down to is the same old shit. So many people think that social media companies should be forced to keep up the content they like, and forced to takedown the content they disagree with. It never occurs to them that their own personal tastes differ from others and that there's no way to write a regulation that takes into the account the bad taste of some clueless politicians.

Oh, and it gets worse. You see, MP Damian Collins has another possible solution. He's launched his own fact checking service, called "Infotagion," promising to tell people what is disinformation that must be removed, and what's okay.

In other words, he's positioning himself to be the Lord High Internet Censor of the UK.

We've discussed before the differences between content moderation and censorship, and let's be quite clear here: what Collins is proposing is not content moderation, but censorship. He's set up his own fact checking service, and seems to think that he can magically decide which content sites must all block, and which content they must allow. It's not hard to see how that kind of power will be immediately and frequently abused by petty and small minded politicians.

USPS recommends shipping your holiday gifts before these dates