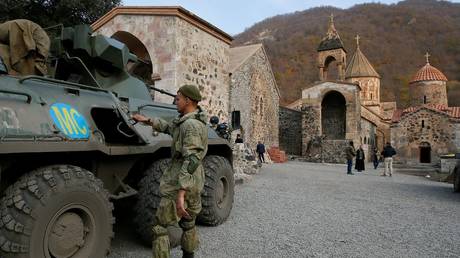 The Russia-brokered truce between Armenia and Azerbaijan helped stop the violence in the Nagorno-Karabakh region, Russian President Vladimir Putin said. Its status remains unresolved but a way to ‘normalization’ is open, he added.

“The final status of Nagorno-Karabakh is unresolved; we agreed to maintain the existing status quo,” Putin told journalists on Tuesday, speaking about the fate of the disputed region that has since September become an arena of a fierce military conflict between the two neighbors.

The Moscow-brokered armistice helped stop the bloodshed, the Russian president said, calling it one of the most important results of the talks with the Armenian and the Azerbaijani leadership. He called the recently reignited conflict a real “tragedy” that affected many families on both sides.

“More than 4,000 people died, according to the official estimates. I believe the number of casualties is higher. Tens of thousands have been injured or maimed,” Putin said.

The armistice ceded control over some areas in the disputed region to Azerbaijan, leaving a 6-kilometer long mountain pass as the only remaining route connecting Nagorno-Karabakh with Armenia proper. Still, Putin said that maintaining the balance of power in the region was just as important as putting an end to the conflict.

“We believed that a balance of forces should be maintained even in the face of such serious developments,” he said, adding that Russia took “every effort” that Armenia did not feel “abandoned.”

He noted that the Collective Security Treaty Organization (CSTO) – a military alliance of several former Soviet states, which Russia and Armenia both belong to – could not interfere into the conflict on Yerevan’s side.

“According to the international law, Nagorno-Karabakh and the adjacent areas are indisputable Azerbaijani territories,” Putin said, adding that the CSTO could only intervene in case of an aggression against one of its members but “no one encroached on Armenia’s territory.”

Under the armistice, Russian peacekeepers will protect the remaining route linking Nagorno-Karabakh to the Armenian territory, which is also known as the Lachin corridor.

Speaking about Turkey’s “open support” of Baku in the recent conflict, Putin said that, although one could give various assessments of it, Ankara could hardly be accused of violating the international law. Moscow managed to convince Azerbaijan and Turkey to limit Ankara’s involvement in the truce monitoring to avoid a potentially negative reaction from Yerevan, he noted.

Relations between Armenia and Turkey have been strained because of the violent crackdown by the Ottoman Empire against Armenians during the First World War. Yerevan and Armenian associations across the globe call it genocide. Ankara does not recognize those events as such.

Under the deal, Turkish forces would not be present on the ground as peacekeepers but could still remotely monitor the truce through drone missions as part of a joint center with Russia.

The Russian leader believes that the peace deal laid the groundwork of a potential way forward.

“The sides have agreed on resuming transport communications, economic ties. This is of utmost importance and it creates a good basis for the normalization of relations in the long run,” Putin said, adding that it could be a good idea to focus on the social, economic and humanitarian aspects of the crisis.

If Baku and Yerevan manage to get their relations back on track and create conditions for “normal life” of their people, particularly in the conflict zone, that would contribute to resolving the status of the disputed region, the president believes.

Putin called the return of refugees to the war-ravaged region a “very important” and “very sensitive” issue, adding that the Russian peacekeepers deployed to Nagorno-Karabakh have been entrusted with monitoring this process.