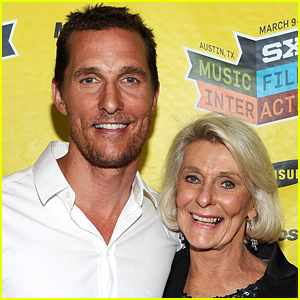 Matthew McConaughey is going into detail about why he and his mother Kay were estranged for 8 years.

“Mom and I had a rough patch for about eight years right after I got famous, but we healed that up back in 2004,” he said on Red Table Talk about the beginning of his fame which came after A Time to Kill.

“I started having my weekly Sunday call home to call my mother … mother wouldn’t answer the phone, a fan of my fame was answering the phone,” he continued. “I was trying to find my own balance with fame and I would share things with her and to whatever amount of innocence it was — we can now completely laugh about it — but some of those things I would share might show up in the six o’clock news three days later.”

He pointed to one house tour she gave to “Hard Copy,” in which she revealed embarrassing tidbits about him as she showed off his bedroom and bathroom.

“Mom’s leading the camera, ‘Here’s the bed where I caught him in Michelle, it’s no big deal, because he didn’t last,’” he said. “‘And here’s the bathroom, walked in on him and caught him doing you know what.’ I’m going, ‘Holy shit, mom!’”

Eventually, time healed the wounds and he was able to bring her to events and let her into his life.

“I said, ‘Mom, hit that red carpet, tell them all the stories you want,’ and she’s been great about it since,” he added.

“I was enjoying his fame more than he was, I guess,” Kay added.