The marsupial of legend returns and he’s never been so fluffy. But there’s nothing soft and cuddly about Crash Bandicoot 4: It’s About Time. In true Crash fashion, this cute and colourful platformer is here to kick your arse.

The Crash series has never been coy about its intentions regarding your arse. Since the first game, way back in 1996, the series has been all about tripping players up. Having the character run into the screen through 3D levels, with enemies and obstacles coming right at the player? That’s intense. Almost as intense as the chase levels, where Crash desperately tries to escape some rampaging beast by running towards the player, with mere seconds to react to suddenly appearing obstacles. Over the years Crash sequels have given us new characters to play with and cute animals to ride, but it’s never stopped being challenging.

Crash Bandicoot 4: It’s About Time embraces that old-school difficulty. Into the screen, out of the screen, riding critters at breakneck speed as the world throws obstacles in your path, those old chestnuts are present and accounted for. Side-scrolling platform sequences where every couple of jumps there’s some new deadly danger sending you back to the previous checkpoint? Check. Dying right before a level checkpoint and loudly cursing the developers by name? Damn you, level design lead Ray West. That’s right, I hunted you down in the game credits and made you my battle cry. I guess it’s more of an anguished cry. Battle cry sounds better, let’s go with that.

Mixing up the mayhem this time around are the four Quantum Masks, ancient witch doctor masks that possess power over space and time. The game opens with Crash villains Uka Uka, Doctor Neo Cortex, and Doctor Nefarious Tropy attempting to escape the timeless prison they were trapped in way back in 1998’s Crash Bandicoot: Warped. Their efforts lead to the trio tearing a hole in the multiverse, which they plan to use to conquer all of the dimensions. The only way for Crash and sister Coco to save all of reality is to collect the four Quantum Masks and seal the transdimensional hole.

Each of the four Quantum Masks represents a new way for the game to screw with players. One mask switches things like floating platforms and barriers in and out of existence, leading to platforming puzzles in which the bandicoots must jump between perches that disappear and reappear with the press of a button. The gravity mask inverts gravity. At first it’s used to make Crash and Coco walk on the ceiling. Later in the game I had to pull off moves like jumping off a platform, inverting gravity, moving over a different platform, and inverting again to avoid lasers and spikes. The dark matter mask is a weird one. Activating it causes the player to become a whirling tornado of dark matter, able to reflect certain magical attacks and jump great distances.

My favourite of the four masks is Kapuna-Wa, the mask of time. Activating it slows time for a brief moment. One use is causing a delay in the explosions of Nitro crates, those green explode-on-contact boxes Crash players dread, turning them into viable platforms instead of instant death. It can slow down obstacles, making them easier to traverse. It can slow down enemies, making it easier to attack their openings with a signature spin attack. As the game progresses, the time mask is used for platforming, and slowing objects like falling ice chunks so they can be safely jumped across. Some of my most spectacular deaths came from time speeding up at inopportune moments.

These much-hyped masks, with their all-powerful abilities, are mainly used to screw with us. That’s so Crash Bandicoot. I was a little afraid that Toys For Bob, the developers behind the easy-peasy fun-and-breezy Skylanders series, would make a kinder, gentler Crash game. Instead, it feels like the studio really leaned into those punishing moments. 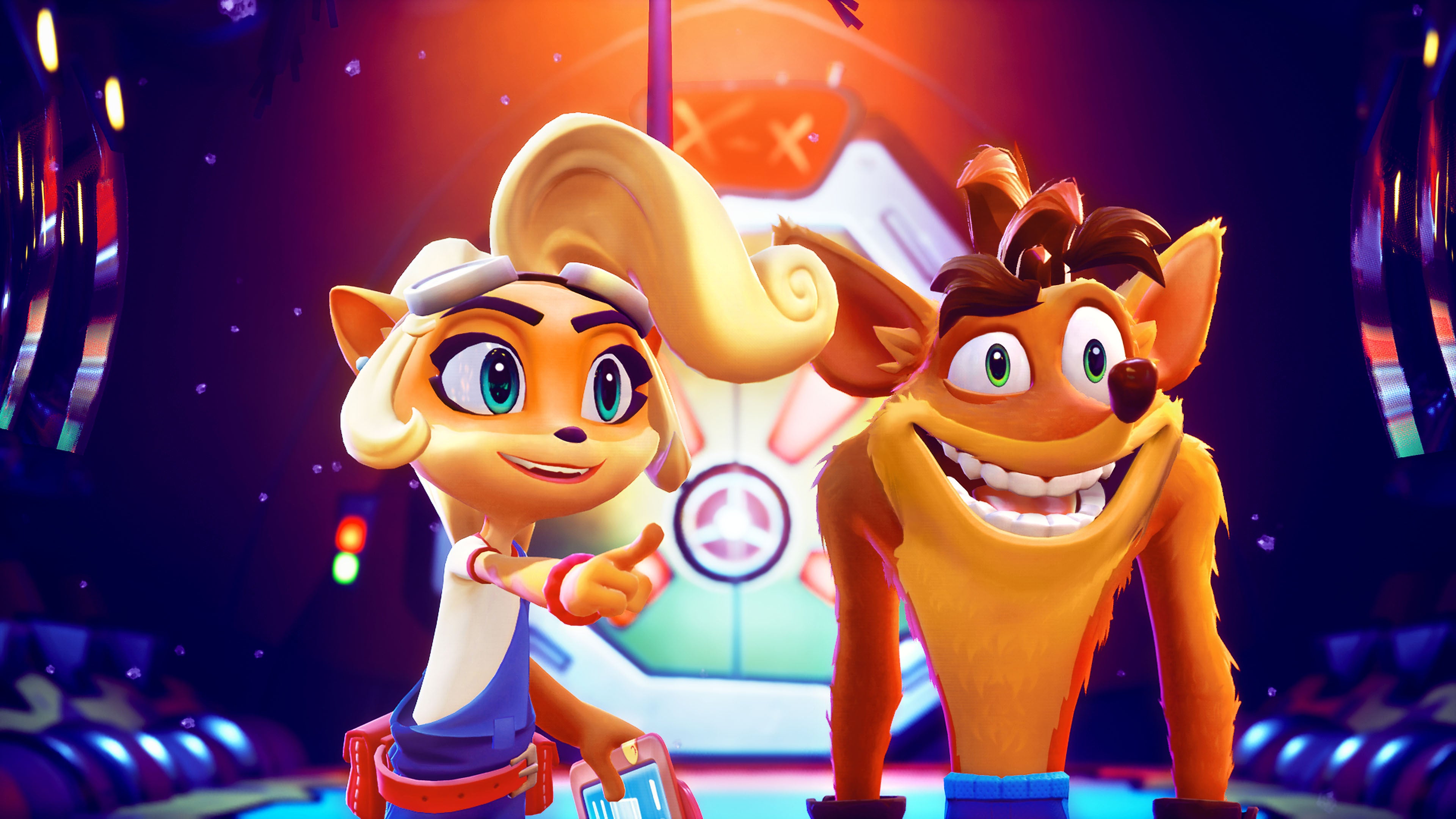 Crash Bandicoot 4: It's About Time

BACK OF THE BOX QUOTE

The levels that do get overly frustrating.

Completed story mode in around 10 hours, not sure how much of that was dying and retrying. Going back through playing N.Verted versions of stages to unlock new skins.

Fortunately for less adept Crash players, there’s a new way to play. Instead of having a set number of lives and restarting at the beginning of a level when they run out, you can switch from that “Retro” playstyle to “Modern.” In Modern mode, you always continue from the last checkpoint, no matter how many times you die. In fact, the game will often spawn an additional checkpoint if you’re having a hard time with a particular platforming sequence. The downside is that every time you die, a counter in the top right corner goes up, counting how many times level design lead Ray West has murdered you. I will not lie, towards the end of the game there was one level that had me in triple digits.

This isn’t a game where we’re expected to breeze past every one of the dozens of levels without dying the first time through. Crash Bandicoot never has been. It’s about progressing, dying, cursing, progressing some more, dying some more, and progressing some more. It’s about figuring out how to move forward, trial and error style. Some of you hate that sort of game design. Crash Bandicoot 4: It’s About Time might not be for you then. I spent a great deal of time during the latter part of my playthrough pausing, breathing, maybe reading some tweets, and then returning to the challenge. I never felt like giving up. I just needed a little time.

Now that I’ve completed all the Crash and Coco levels and defeated the final boss, my job is far from over. Each of the game’s levels can be played two ways, normal and “N.Verted.” N.Verted mode mirrors levels and applies these weird Photoshop filter effects. Some are in black and white, with characters splashing colour about every time they spin. Others are strange and sketchy. One particularly tough N.Verted level was dark save for coloured pulses revealing enemies and obstacles as my character got close. It’s nice to finish a game and still have the game to play all over again, only different.

I’ve also not finished all the side story levels. There are three additional playable characters. There’s Tawny, Crash’s girlfriend from another dimension; Dingodile, Crash’s former half-croc, half-dingo enemy; and Dr. Neo Cortex himself. Each has their own playstyle, and each gets their own selection of optional levels to play. Tawny uses her hookshot and arse-kicking powers to help Crash and Coco along on their adventure. Dingodile sucks up explosives with his shotgun and hovers. Neo Cortex has a special gun that transforms enemies into bouncy platforms. These characters’ optional levels generally tie into Crash and Coco’s levels, explaining some of the stranger things that happen during the main story. If a door blows open for no reason while playing as the primary bandicoot duo, odds are one of the side characters did it.

Crash Bandicoot 4: It’s About Time also stays true to its predecessors’ collect-a-thon roots. Each level has a series of goals requiring you to collect gems, which are used to unlock character skins. Collecting all the wumpa fruit, breaking all the boxes, dying fewer than three times, and finding the hidden gem all reward players with gems. There are also time trials for each level, complete with developer ghosts to race against, which reward relics. Basically, there is a whole hell of a lot to do in order to 100 per cent this game.

Now that I’m not racing against time to finish the game in time for review, I’m slowly going through each level, applying what I’ve learned and patiently seeking out every box and piece of wumpa fruit. Crash Bandicoot 4: It’s About Time has plenty of stuff to keep me playing for quite a while, and I’m quite looking forward to digging in.

Don’t let the lush, colourful graphics and whimsical, xylophone-heavy soundtrack fool you. Crash Bandicoot 4: It’s About Time’s fun and frivolous facade hides a game that feels like it’s actively trying to murder mischievous marsupials. It’s about snatching victory from the jaws, bombs, fast-moving vehicles, spinning blades, laser grids, and fire spouts of death. I failed much more often than I succeeded during my run thanks to Ray West and his lackeys, but I had a great time doing it.