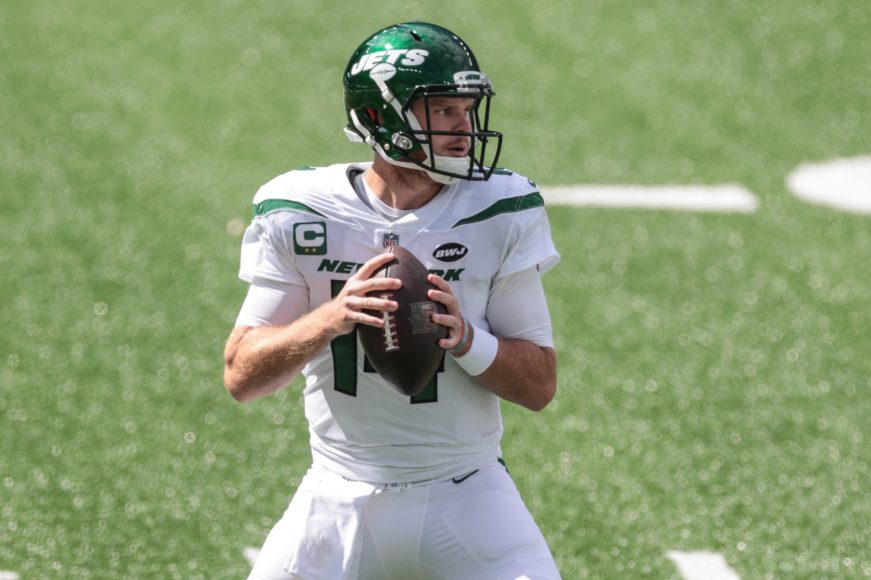 The Chicago Bears seem to have finally put the bookend on the Mitch Trubisky era. After yet another disappointing start in Atlanta, head coach Matt Nagy couldn’t take it anymore. He moved the 26-year old former #2 overall pick to the bench and inserted Nick Foles. The move paid off immediately as the former Super Bowl MVP led the team to an epic 16-point comeback win. While fans are happy with the switch, they do have concerns about the Bears’ future at the position. Do they draft somebody high in 2021? Or do they think more creatively? This is where Sam Darnold comes in.

Some people might be confused. Here’s the quick recap. Darnold was drafted 3rd overall in 2018 by the New York Jets. Since then he has sat firmly as their unquestioned starter. However, the missteps by the organization in building around him have only become more evident over the past three seasons.

Here they are in his third season. The Jets are 0-3, have no offensive line, no wide receivers, and an offensive philosophy under head coach Adam Gase many experts consider to be a joke. As evidenced by New York’s offense ranking dead last in points and yards. Right now most consider this team the worst in the NFL and in line to secure the #1 overall pick in 2021.

So what does this have to do with Darnold’s future?

Sam Darnold may already see the writing on the wall

Most people agree that the #1 pick in this upcoming draft is basically the right to draft Clemson quarterback Trevor Lawrence. He is easily the most hyped QB prospect to come out of college since Andrew Luck. That would obviously mean Darnold’s future in New York is growing shorter by the week. In fact, one source informed me he’d like to end it sooner than later.

Not only that but a certain other team may wish to help him with that.

“Darnold is looking for a way out of New York. Bears are among teams who have interest.”

What do the Bears have to do with this? Keep this in mind. Foles is 32-years old. That’s not ancient by NFL standards, but it’s hardly a guarantee he has a long career ahead of him. To say not of his well-established track record for never having played a full season in his career. Chicago has to keep one eye on the future. Darnold is still just 23-years old and immensely talented.

Putting him under the guidance of Nagy and this QB-friendly coaching staff could finally unlock that immense potential. It’s way too early to assume anything, but this will be a situation to monitor.