VDV and VKS sections shifted to Kapustin Yar since the main exercise takes place there, with VVP watching, and most of the forces are pulled in for the show.

Thanks to Konrad Muzyka for helping put some of the info together.

This one is the big show piece event, since VVP is personally at the range to observe the activities of the day. A ‘coalition’ scenario got wargamed with forces from other countries participating in a large counter-offensive that destroyed OPFOR. Land and air delivered fires effected a massed strike against the enemy, they achieved superiority in firepower, while airborne forces landed to delay enemy reserves from being brought into action. With large flanking strikes long two axis the coalition created a double envelopment, then executed a large strike that forced enemy forces to surrender. Lots of things got blown up, some new gear and vehicles were on display for VVP, like TOS-2, etc. 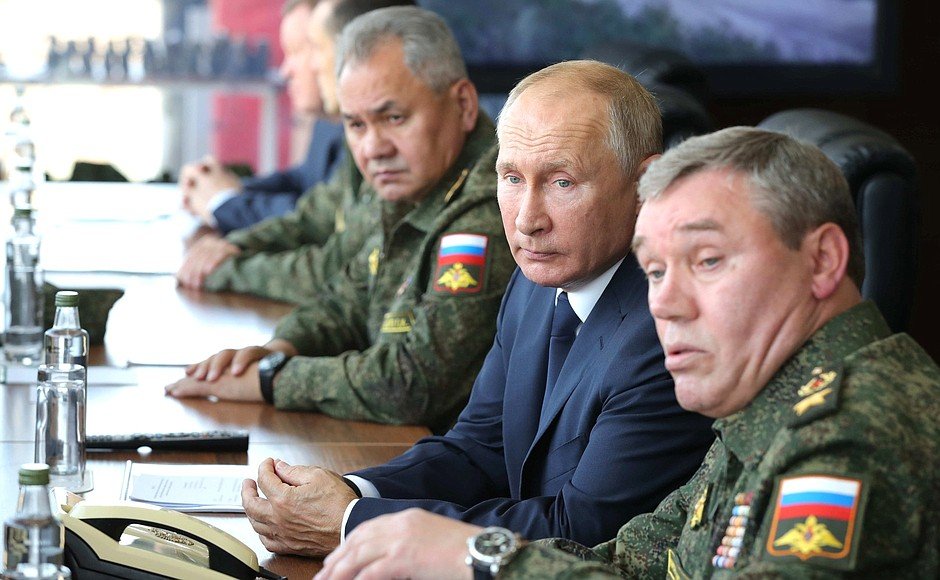 Air defense units fielding S-400, S-300V4, Buk-M3 ran an exercise using the latest high velocity targets designed to simulate enemy tactical-operational missiles and aircraft. Again, we have Saman, Adjutant and U-95 targets listed. Maybe 10 launches or so. Meanwhile PVO-SV units used 35 missiles and 7000 rounds in their air defense exercise against 55 targets of various types. Units consisted of Pantsir-S, Stela-10M, Stela-S MANPADS and something they called ‘Izvoz’ (don’t know that one, might be bad copy by the press release).

2x battalions of Iskander-M conducted launches using 9m728 cruise and 9m723 SRBN missiles. According to the scenario they executed a massed strike against enemy critically important objects. The force included one battalion with Tockha-U, and a battalion of Tornado-S (300mm MLRS). They fired 2 cruise, 3 Iskander-M ballistic missiles, and 3 Tochka-U. Tornado-G MLRS employed some new warhead that detaches from the missile and parachutes directly over the target (presumably an airburst weapon). The massed strike included 9 self-propelled artillery battalions and 8 MLRS battalions. That’s quite a bit. So we’re talking 3x missile (12 TELS), 9 MLRS + 9 SPA. One artillery battalion was dedicated to counter-battery fire, eight focused on the massed strike.

Drones were used to reveal and then fix enemy positions, involving about 20 different UAS.

57x Il-76MD transports flew in two columns to Kapustin Yar from Taganrog and Ulianovsk. The aircraft were about 30 seconds flight time apart, and holding 3km separation between the two columns which were heading for a pair of landing zones. The idea is to reduce the time for unloading VDV paratroopers. Together they dropped 900 airborne, 118 pieces of equipment, including 10x BMD-4M. Altitude was about 600-900 meters.

Mi-8 with Ka-52 escorts airlifted Tigr vehicles belonging to Airborne units, along with VDV troops who rappelled from 20-25 meter heights onto the field. Another VDV heliborne operation, with some Ka-52 strikes as well on targets at 2.5km ranges. Mi-8, Mi-26, and Mi-24 helicopters were involved in a large operation airlifting more than 1170 paratroopers belonging to a VDV brigade (56th Air Assault BDE) and Pakistani special forces. Initial forces loaded on Mi-24s seized the landing zone, mobile reserves were delivered by Mi-26s using Typhoon vehicles. Mi-8s lifted in D-30 howitzer batteries. All together they brought in 40 pieces of equipment using more than 80 helicopters and ~1200 troops.

VKS executes a ‘massed’ air strike with 78 aircraft, LRA (long range aviation) and tactical aviation. We have the whole Sukhoi family of Su-34, 30, 27, 25, 24, 24MR and Tu-22M3 bombers. This is in effect their aerospace assault. First Su-27s ran an airsweep at 1500 meters ahead of the strike. Presumably recon aircraft Su-24MR went in second, followed by two squadrons of Su-25s which penetrated air defenses, and two flights of Su-24Ms whose job it was to work with reconnaissance capabilities and Strelets targeting system to strike air defense systems Then 4 flights of Su-30SMs also struck the air defense systems. Su-34s followed with strikes against critically important objects and armor columns. Seems the strikes were largely with unguided bombs at fairly low altitude. Two squadrons of Tu-22s brought in 1500kg bombs to drop on command and control points.  More than 20 Su-25SM3 were involved, flying from an airbase near Volgograd to drop FAB-250s. The rest dropped more than 100 bombs, flying from 4 different airbases. These strikes were made at 200-400 meters. In total about 60 aircraft participating from 4th AAD. Presumably the rest were Tu-22M3s or some other aircraft to make for 78 total.

TOS-2 220mm thermobaric MLRS systems were used for the first time with TBS-M3 rockets. This is a wheeled chassis successor to TOS-1 using Ural as opposed to the T-72 chassis. Supposedly it has better range in terms of missiles, and a more advanced fire control system. More importantly it has its own crane for reloading and does not need a specialized transporter-reloader vehicle. Also it has some personal EW protection system. Another battalion, composed of 9x TOS-1A destroyed an enemy motor rifle battalion, guessing most of the fires came from these systems while TOS-2 was wheeled out so VVP could see something new and interesting. While we’re on the subject, a different unit of motor rifle troops used RPO-PDM thermobaric launchers (successor to RPO-A Shmel I think) to destroy enemy targets and fortifications at a range of 800 meters (pretty good for a short range system).

The newest Uran-14 firefighting UGV also got used to douse damaged equipment. Allegedly it can be remotely controlled over 1km+ that would be impressive since Uran-9 in Syria had a lot of trouble with distance remote operation. Uran-6, another UGV, was used from mineclearing.

Engineer-sapper units created a flame barrier 2km in length to prevent an enemy armored assault, combined with an anti-tank trench that they had dug earlier. They also used a 122mm mine laying system to deploy a minefield at range. A different unit used minelayers, GMZ-3, to cover one of the flanks with a separate minefield. This tracked minelayer uses a much more modern nav system, which allows them to get precise coordinates on the minefield being put down and the work of each vehicle (6 in total) as they lay the field. Supposedly they can lay the minefield at a speed of 6-16 km/h. 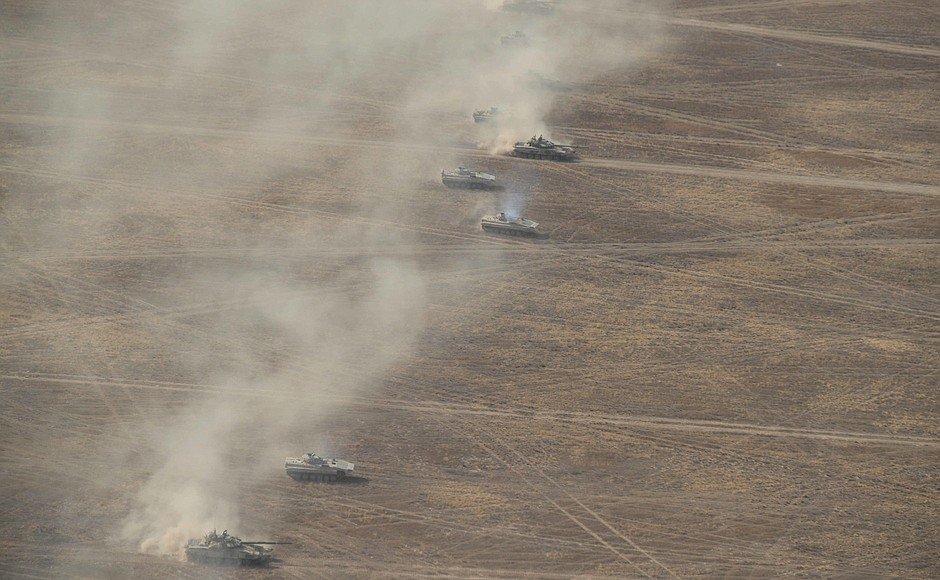 Armenian forces are at this range conducting a joint flanking maneuver with Russian units, with 8x Mi-28Ns, and 4x Su-25s supporting. They must be part of the larger air strike scenario that played out on this day. Belarusian forces also involved in this exercise, working jointly with Russian units. The Russian component included elements of 20th CAA from Western MD, which could be serving as reinforcements in this scenario. They were not identified.

MLRS batteries from units belonging to Southern MD executed a large strike using more than 20 Tornado-G 122mm systems at about 20km range. They destroyed a supposed adversary force consisting armored vehicles and artillery. Within about 20 seconds they discharged more than 500 rockets, targeting provided by drones belonging to a motor rifle drone detachment (looked like Eleron-3).

Air defense regiment belonging to 4th AAD trained in defending a command point from an enemy missile strike. S-400s and Pantsir-S1s conducted electronic launches from prepared positions, and while ‘on the move’ so to speak, with quick stops to prepare for the engagement. Part of the exercise was focused on the transition from moving to quickly engaging an incoming missile strike in an EW contested environment.

A sizable exercise involved elements of the 7th Mountain Airborne Division, setting up defensive positions in higher terrain to prepare for an enemy landing. This event offered an opportunity to test integration between Ratnik infantry combat system and BMD-2KU C2 vehicle.

Black Sea Fleet units conducted a landing near the banks of Vityazevo (Vityazevskaya Spit). This is on the Russian Black Sea coast near Krasnodar. Su-34s and surface combatants (11 ships) conducted strikes against coastal defense forces and enemy ships to prepare the beach for landing. Minesweepers cleared an opening for the amphibious landing group (project 02668 Vice-Admiral Zaharyin, and 2x project 266ME – Kovrovets & Valentin Pikyl). Nearby 10x Su-25M3s destroyed an enemy airfield to deny the adversary air support. They used recon info from a detachment that was deployed earlier into the area to determine which buildings to engage. 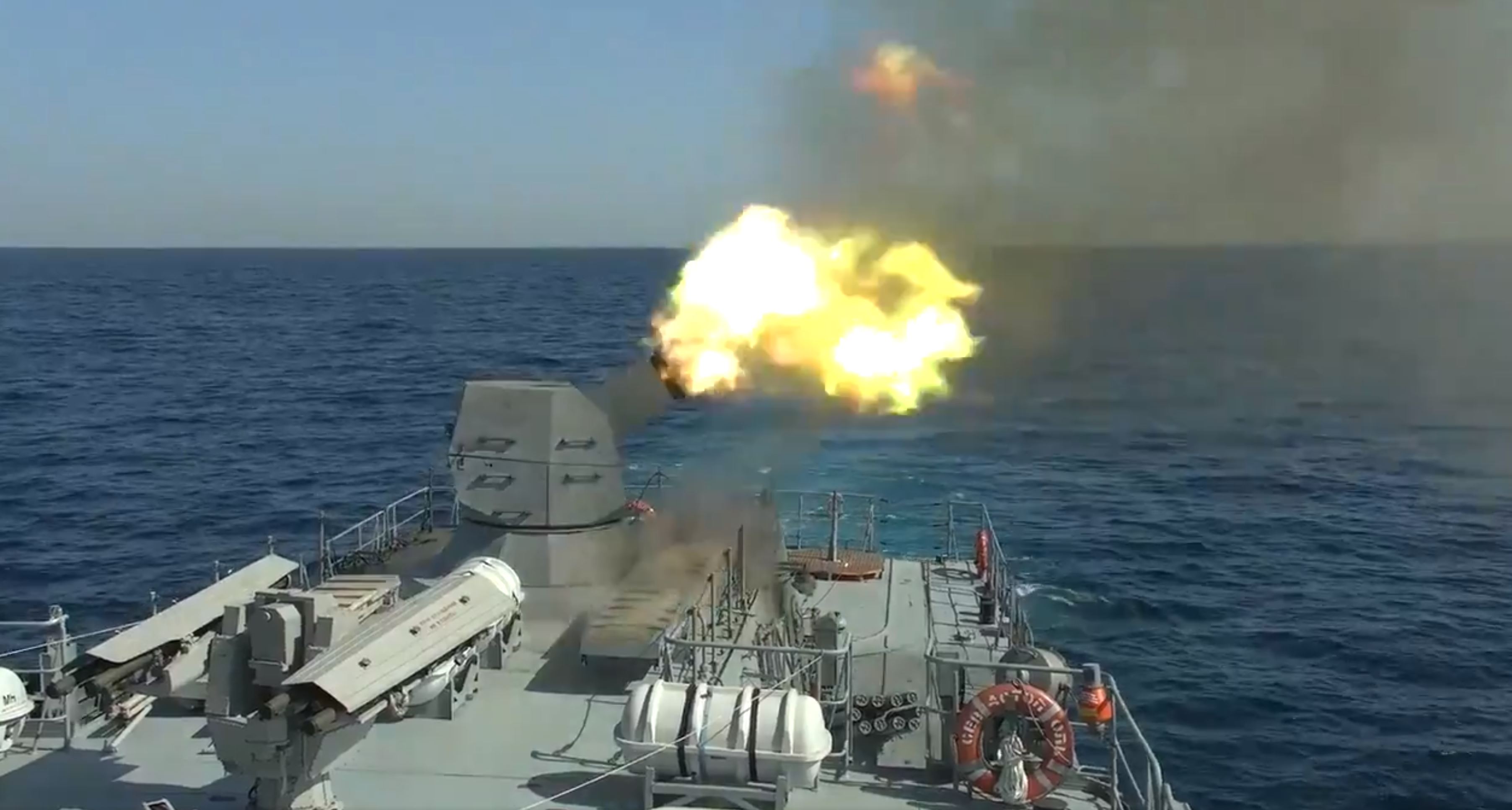 Buyan-M missile corvettes Veliky Ustyug & Grad Sviyazhsk worked to eliminate the effects of chem/bio use by an adversary at sea (interesting exercise). OPFOR employed a drone with a capsule containing chemical agents. They planned to attack the Russian navy with this chem agent, I guess this is the sort of adversary which has drones and chemical weapons, but not anti-ship missiles. The Russian ships shot down the drone, but the chem agent got into the air and slimed the ship surfaces, so the crew had to get on their hazmat suits, seal the ship, and clean the surfaces. 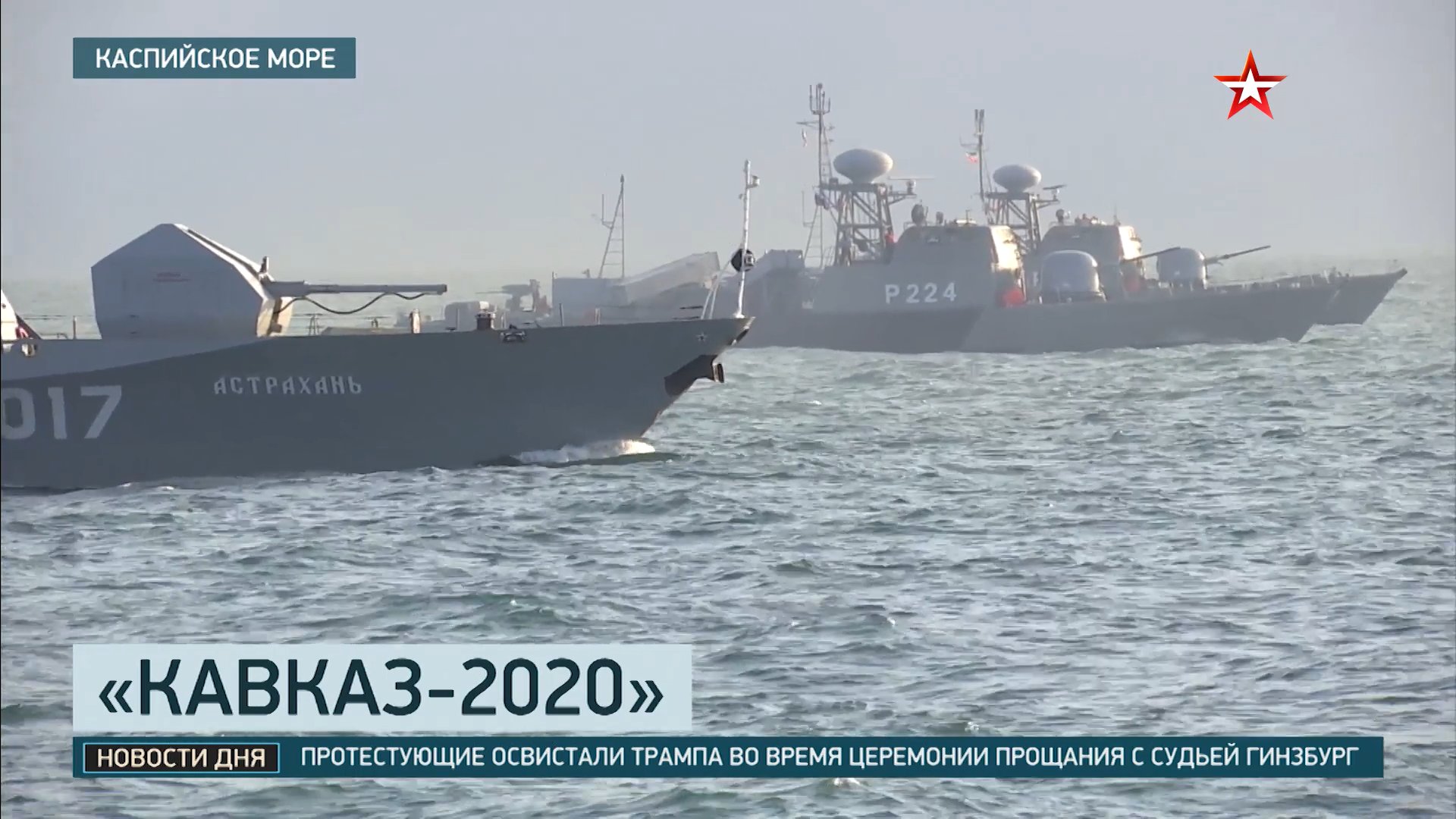 Naval infantry conducted a landing at Zelenomorsk supplemented by floating cranes used as transports. Mi-8s lifted the initial naval infantry assault in, followed by units on ships. Some combination of BTR-82As and infantry delivered via two transports (VTR-79, VTR-139). About 600 naval infantry unloaded supported by 16 ships altogether. They had air and combat helicopter support. The exercise is interesting because Russian forces continue to find ways to adapt ships in order to provide sea lift or amphibious landing capacity.

A battalion of Buk-M3s at Zelenogorsk training range in Dagestan defended against an enemy aerospace attack. These units detected incoming enemy missiles aimed at the naval infantry forces at the range, destroyed them before they got near the target area, and then displaced from their firing positions.

Abkhazia – Tank crews belonging to Russian and Abkhazian units, using T-72B3s, employed a tactic called ‘tank trident’ which allowed them to inflict maximum damage to naval forces belonging to an adversary more than 1km out at sea. Basically it seems to be just firing from covered positions and quick displacement against naval targets. Other units defended ground lines of communication and airspace surrounding in the more mountainous section of Abkhazia, using motor rifle, artillery, and air defense units.

South Ossetia – Motor rifle elements from the 4th military base practicing at the training range Dzartsemi (58th CAA) conducted a counter offensive. BMP-2s in the center, T-72B3 armor on the flanks, creating ‘tank wedges’ to break through enemy lines. Reserves destroyed enemy VIEDS. About 1500 soldiers and 300 pieces of equipment involved, fairly standard motor rifle kit: T-72s, BMP-2s, Tunguska-M1s, Strelas, 2s3 Akatsiya SPA, and 120 mm Sani mortars. This exercise uses a lot of references from the Syrian war and may be the only actual ‘counter-terrorist’ exercise taking place against a simulated force of ISIS-like opponents. I recognize this is S. Ossetia in Georgia but nonetheless they’re reporting implementation of tactical maneuver terms largely born from the Syrian experience and they’re not doing that elsewhere. 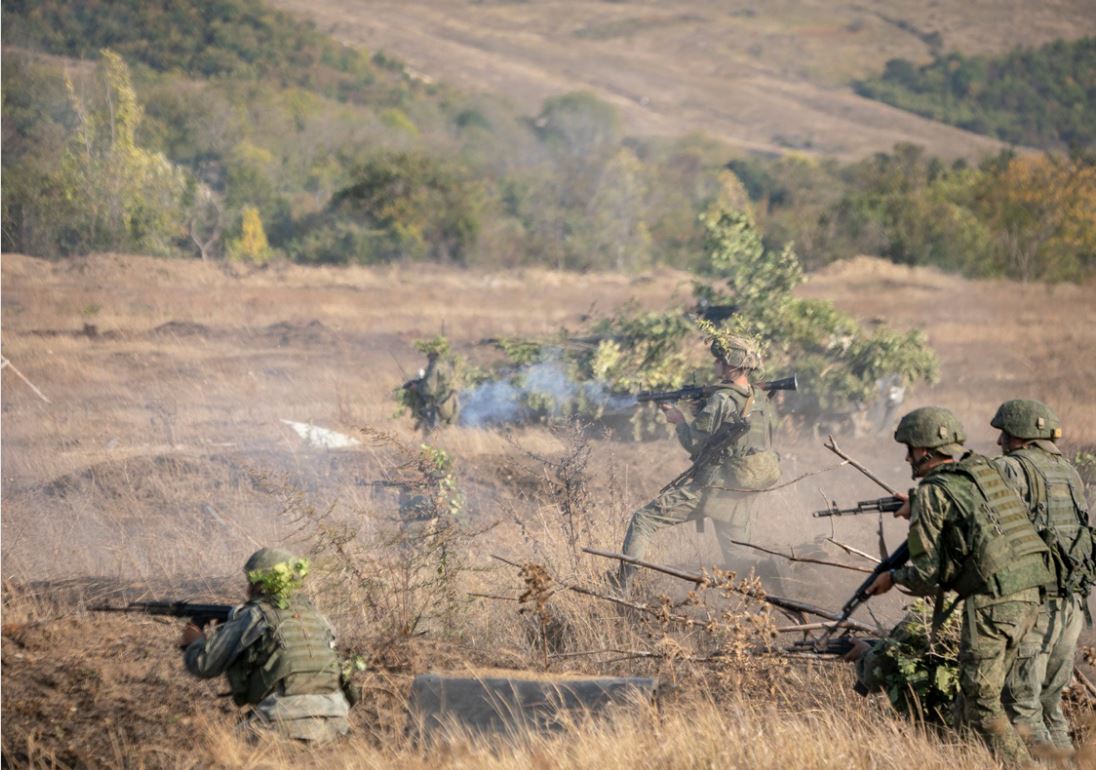 Armenia – At the Alagyaz training range Russian Mig-29s and Armenian Su-30SMs conducted strikes against a supposed adversary armored column (who knew on Sunday Armenia would find itself in a real war with Azerbaijan, where its Su-30s are essentially the country’s highest valued aerospace assets). The exercise included low altitude flight (1500-3000 meters at 300-800km/h), more than 50 electronically simulated launches, training against radar detection, and procedures in the event of an emergency/equipment failure. Army aviation units executed a heliborne landing using about 10 Mi-8MTV helicopters as a separate exercise at the range. These same helicopters were used to train in medivac of wounded. Other trainings included rebasing to reserve airfields.

Some interesting odds and ends:

PLA at the exercise – Kapustin Yar

You could move to an almost 'COVID-free' island in the Caribbean for up to 2 years, but only if you make almost triple what the typical American makes