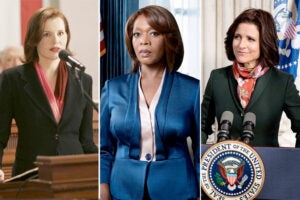 President Leslie McCloud was a real pioneer — but the plot focuses on Fred MacMurray as the First Husband struggling to find a purpose. And to add insult to injury, she resigns when she learns she’s pregnant.

In this short-lived ABC sitcom, Duke played President Julia Mansfield who had to deal with a cheating first husband, a rogue Air Force general and multiple schemes for her impeachment.

In this spoof of “The Godfather Part II,” Applegate plays a version of Diane Keaton’s Kay Adams-Corleone — named Diane — who leaves the Michael-like Mob boss (Jay Mohr) and goes on to become president of the U.S. Sadly, she puts a nuclear disarmament deal on hold to return to her ex.

Davis’ Mackenzie Allen was a former congresswoman and political independent drafted to be VP on the ticket of Republican Teddy Bridges, who soon dies of a brain aneurysm.

Wettig’s Caroline Reynolds emerges as one of the chief villains of the Fox series, secretly plotting with the covert Company to execute innocent man Lincoln Burrows (Dominic Purcell) for the murder of her brother when she was VP.

Jones plays tough-as-nails President Allison Taylor in the seventh and eighth seasons of “24,” refusing to buckle to terrorist demands despite the murder of her son and the shooting of her husband.
Alfre Woodard, “State of Affairs” (2014-15)

Louis-Dreyfus’ Selina Meyer assumes the presidency when the former sitting president resigns for personal reasons — just as she’s seeking her party’s nomination. But while running as an incumbent, she musters a tie in the electoral college — and winds up losing the presidency when her own VP bungles his vote in the Senate.

Savage plays New Mexico Senator Laura Montez, who plays up her Mexican heritage as the running mate of Selina Meyer’s chief rival — and then emerges as the president after a tie in the electoral college and deadlocks in the House and Senate.

In the original, Bill Pullman’s president was an ex-fighter pilot who went back into the cockpit to fight alien invaders. In the long-after-the-fact sequel, Ward’s President Elizabeth Lanford plays a significantly smaller role in overcoming the new attack.

The former “Wonder Woman” star rejoins the DC Comics universe on the second season of “Supergirl” as President Olivia Marsdin — an effective leader who is secretly non-human.