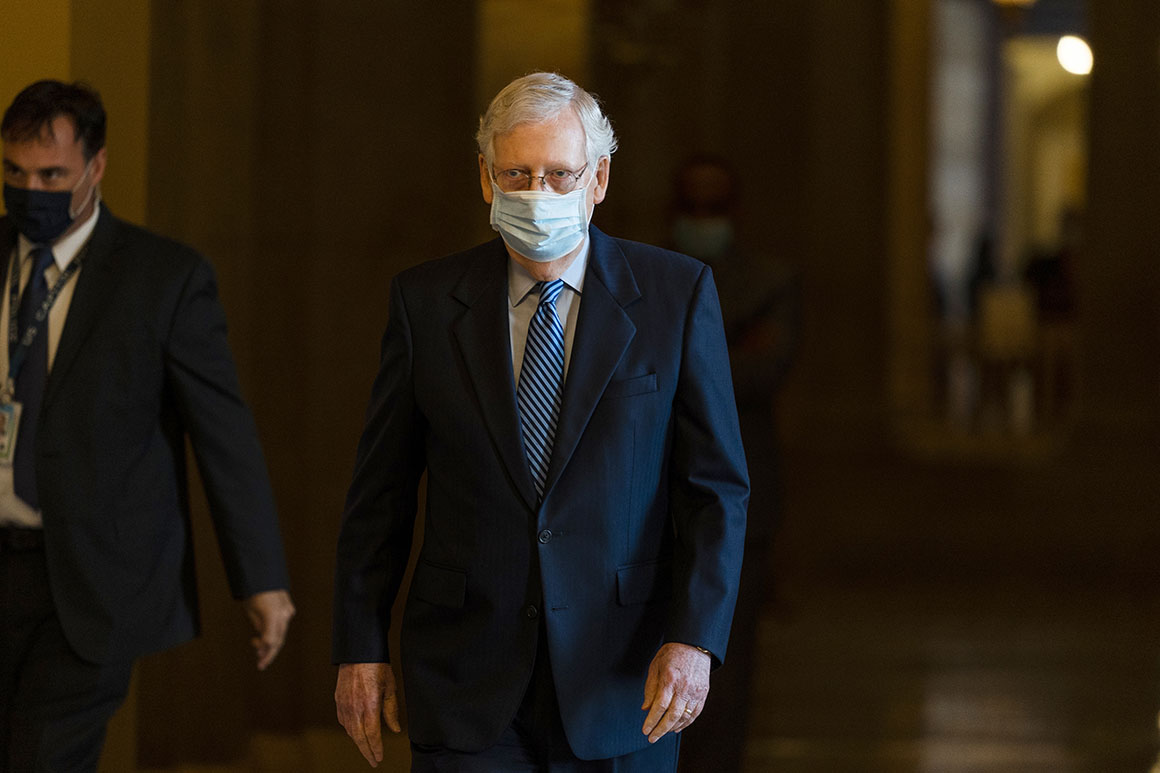 With their majority on the line, Senate Republicans are beginning to fret about the prospect of facing voters in the final weeks of the election without a new round of coronavirus aid being enacted.

As the talks between Speaker Nancy Pelosi and Treasury Secretary Steven Mnuchin teetered Thursday on the verge of collapse, Senate Majority Leader Mitch McConnell (R-Ky.) is trying to stay outside the blast zone. Many of his members up for reelection say it would be a mistake for the Senate to adjourn for the election without taking action to give people some relief.

“There’s no reason we shouldn’t all be here until the election if that’s what it takes to pass a follow up to the CARES Act,” said Sen. Thom Tillis (R-N.C.), who is in a tight race with Democrat Cal Cunningham. The pair were scheduled to face in a debate on Thursday night.

“I do not think we should recess without a coronavirus package,” said Sen. Susan Collins (R-Maine), who is facing Sara Gideon, the Democratic Maine statehouse speaker. “We're not that far apart.”

Heading into the election empty-handed would surely be a drag on vulnerable senators and House members in both parties. The U.S. economy is mired in a recession, the coronavirus is continuing to spread across the country with no signs of relenting and massive layoffs are being reported daily. Congress is line to shoulder much of the blame for not offering any relief to the crisis since the spring.

The Senate appears to be sticking around for at least another week, if not more, to keep the Supreme Court nomination of Amy Coney Barrett moving forward. Judiciary Committee confirmation hearings on Barret are set to begin Oct. 12. And the House can always reconvene to process a bill if there’s any deal. But it might take a push from those most at risk of losing their jobs in a month to get any deal over the finish line.

The effort to get Pelosi and Mnuchin back to the table started among moderate Democrats in the House. And it’s clear Senate Republicans in tough races are getting similarly antsy, even as they criticize Pelosi and Minority Leader Chuck Schumer (D-N.Y.) for refusing to accept a slimmer stimulus bill in September.

Sen. John Cornyn (R-Texas), facing challenger MJ Hegar this fall, said what worries him most is that a vaccine “will be delayed because of the lack of funds because of no deal.”

“This should’ve been done three weeks ago,” said Sen. David Perdue (R-Ga.), who is narrowly leading Democrat Jon Ossoff. “Yeah, I’m very frustrated by that. Mnuchin and [Pelosi] have been talking this week about some sort of compromise… I’m hopeful. We’re coming back next week, and frankly, I don’t think we should leave until we get it done.”

Vulnerable Senate Republicans, though, aren’t blaming McConnell for the failure to reach an agreement. McConnell offered a roughly $500 billion package several weeks ago, only to see Senate Minority Leader Chuck Schumer (D-N.Y.) reject it as woefully inadequate to the needs facing the country. Democrats ultimately blocked the measure from advancing.

McConnell and his leadership team have been resolute that their conference is so divided over how much to spend that they have to keep spending levels as low as possible to generate maximum GOP support. But Sen. Lindsey Graham of South Carolina, another Republican facing a surprisingly tough challenge this year, said his party is warming to the $1.6 trillion number set forth by the administration.

“We need a package. But it’s got to be something that’s reasonable. It doesn’t help me to throw money at the problem, it does help me to put money where it matters,” said Graham, who is narrowly leading Democrat Jaime Harrison. “Half of us would vote for a package. Maybe more now, if it’s reasonable.”

Senate GOP leaders, however, insist that the failure to enact another stimulus package won’t hurt their incumbents in swing states, despite Democrats leading in several states and threatening incumbents in others.

“Every member speaks for himself or herself, but those I talk to would like to provide that targeted relief,” said Senate Republican Conference Chairman John Barrasso of Wyoming. “But they are not going to add trillions of dollars to our national debt for things that are unrelated to coronavirus. That’s what we see coming out of the Pelosi plan.”

“We have terrific candidates who understand their home states much better than Nancy Pelosi from San Francisco understands the states where our candidates are running,” Barrasso added.

McConnell is kept apprised of the mercurial talks between Pelosi and the administration, and has changed his message from a dour one to a more hopeful one. After declaring the Democrats current $2.2 trillion proposal as “outlandish” and the two sides “very far apart” on Wednesday, he said on Thursday of Pelosi and the Treasury secretary: “I’m wishing them well.”

“I’d like to see another rescue package. We’ve been trying for months,” he said on Thursday.

But since McConnell isn’t in the room, it does leave his position on the ongoing talks something of a mystery. Republicans following the talks have described them as theatrics that seem destined to fail, leaving little role for McConnell at the moment.

A close McConnell ally, Cornyn, said McConnell “understands that the deal has to be struck between the White House and Speaker Pelosi.” Sen. Doug Jones (D-Ala.), who faces an exceedingly difficult reelection campaign, said “there’s a lot of discussion going on behind the scenes.”

But without McConnell playing a central role, Democrats’ have launched a messaging campaign portraying him as eager to fill a Supreme Court seat and reluctant to spend more money on the worst pandemic in a century.

“It sounds like everybody’s really interested except Sen. McConnell,” said Senate Minority Whip Dick Durbin (D-Ill.). “It’ll take a call from the president to tell Sen. McConnell: ‘we have a national emergency.’”

Why the case for Dodgers firing Dave Roberts was never easy to make: Sherman