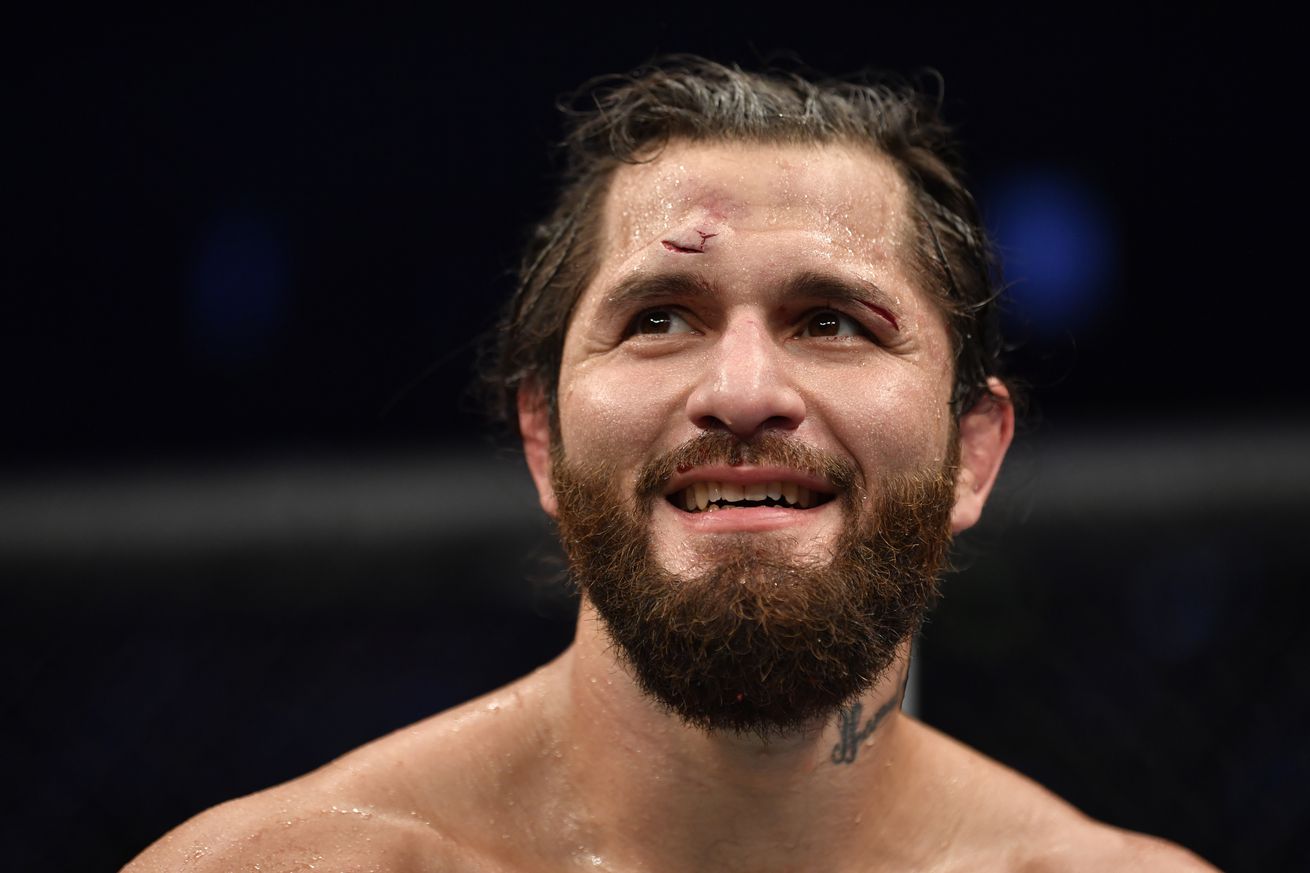 If Tuesday night’s first US presidential debate birthed or exacerbated an annoyance with the 2020 election season, things are only going to get more irritating, especially if you’re an MMA fan.

In a sight both surreal yet unsurprising, the first debate between President Donald Trump and Democratic nominee Joe Biden in Cleveland, Ohio, featured a mostly quiet cameo from the sport’s most ardent Trump acolyte, former UFC interim welterweight champion Colby Covington, who was comfortably seated in the Trump’s side of the gallery alongside the rest of the president’s family, his face peeking through between the shoulders of Melania, Lara and Tiffany Trump in photographs and screengrabs. I say “mostly quiet” because Covington, true to form, found a way to make his voice heard even in this setting: as the candidates exited the stage and cameras drew away, a distinct voice from the floor shouted “WE LOVE YOU TRUMP!” The particular cadence and bro-tastic emphasis on the commander-in-chief’s name – nevermind the compunction to yell out in that scenario at all — left little doubt as to whose mouth the encouragement came from.

This isn’t a piece about Colby Covington, though. Well, at least not singularly or specifically. Rather, it’s more about the man who is now the leading candidate to be his next opponent, Jorge Masvidal. Since Covington’s departure from American Top Team, the two have traded some lukewarm shots at one another in the media, but this week, we found out they’re still playing for the same team, albeit in a different fashion.

On Monday, ESPN’s Ariel Helwani was first to report that Masvidal would join Donald Trump Jr. on a three-city Florida tour for the Trump campaign this Saturday, dubbed “Fighters Against Socialism,” with stops in Tampa, Orlando and finishing with a rally at the ATT gym in Miami, where a roster of yet-to-be-named fighters are expected to attend. While not necessarily the biggest shock in the world – last week, Trump publicly praised “Gamebred” at a “Latinos for Trump” rally in Doral, Florida, for his famous five-second knockout of Ben Askren last year – I have seen a lot of incredulous reactions on social media from fans, who either can’t seem to grasp why Masvidal would hitch his flag to the Trump wagon, think that it somehow constitutes a mishandling of his new-found fame, or both. Those notions, regardless of your political beliefs, couldn’t be more misguided.

It’s hard to tell what Masvidal’s own true political beliefs are and how, if at all, they factor into stumping for Trump. His public statement about the “anti-communism bus,” erroneously conflating or confusing communism and socialism, might be a par-for-the-course lack of understanding, and maybe not even his, but the handiwork of manager Ibrahim Kawa for all we know. Moreover, you’d think that for a fighter that has been passionate about fighters having greater bargaining rights and professional agency in MMA and the UFC specifically, he might not be as enthusiastic for the cause. Or, perhaps you might think that as the son of a Cuban father, he might be critical of Trump’s hardline policies on immigration, which led to 1179 confirmed deportations of Cuban immigrants in 2019; in 2016, the last year of Obama administration, there were only 64 Cubans deported. The truth is, it doesn’t matter if Masvidal’s politics are well-considered, rational or even cogent. It doesn’t matter if they even exist at all, frankly. Masvidal on the campaign trail isn’t about politics, it’s about business.

Masvidal’s career ascent has been a slow burn. For the better part of his 17-year pro career, Masvidal was a hardcore fan’s delight, an always entertaining combination of style and substance, technique and violence, an effortless MMA package all things cool. Then, last year, his stoppages of Darren Till, Ben Askren and Nate Diaz put the spotlight and magnifying glass on him, turning that slow burn into a roaring fire of budding stardom. He won “Male Fighter of the Year” at the ESPYs, launched his own brand of mezcal and became one of the most visible and viable fighters in the sport.

With over 2.4 million followers on Instagram and 623,400 on Twitter, he’s got more followers on both platforms than any current UFC champions, outside of lightweight kingpin Khabib Nurmagomedov (21.6 and 1.16 million on Instagram and Twitter respectively) and Israel Adesanya (3.6 million and 662,300). Earlier this week, Neilsen released its 50 Most Marketable Athletes list, which tracked the Instagram accounts of over 6000 athletes in 21 sports over the last 12 months. Only two MMA fighters made the list: the aforementioned Nurmagomedov at No. 7 and Masvidal at No. 24. You can certainly quibble with Neilsen’s methodology for determining its list, whether it’s the 12-month window, use of key performance indicators to measure “engagement”, or the quantification of “reach, relevance, resonance and return”; after all, no one is going to argue that Masvidal is a bigger star or “more marketable” than Conor McGregor or Jon Jones at this point. Nonetheless, even if imperfect, these metrics are still noteworthy reminders of how Masvidal’s star power has grown exponentially in such a short period of time and the rarified air he is occupying in the UFC roster’s hierarchy.

So, how does that factor into the sudden political motivation of Masvidal? One of the notable features of real celebrity in MMA is that fame begets fame, star power generates its own further growth by unlocking new avenues to exposure. Unlike stick and ball sports, pro fighters don’t have the luxury of being inherently tied to a team; while the UFC brand itself has some similar function, in 2020, those three letters are hardly going to force a fight lover to watch the way that loyalty will compel a fan of a non-combat sport to watch their favorite team. More importantly, prizefighters at the highest level are lucky to compete two or three times a year and the majority of their media exposure and flashpoints of public interest are strictly linked to those fights. They aren’t hitting the field every weekend like a soccer or football player, or playing every other night like a baseball, basketball or hockey player. Therefore, it’s up to fighters to take agency and control over their own brands and do whatever they can to keep their name and face in public. Even a great fighter under UFC employ isn’t going to end up doing the ESPN carwash every week.

That means more than just being an ever-present fixture on social media, as that is normally a circular path. To call back to Covington, if he was simply churning out “Make America Great Again” rhetoric on Twitter all day rather than taking his bombast to the White House and presidential debates, he’d simply be doing nerve-grating performance art for the same old audience, who would be listening to his diatribes and watching his fights anyhow. The ability to court casual, crossover audiences is what stratifies fighters, stars and superstars in this sport. While it takes an initial level of star power to even earn access to those opportunities, once they’re available, it’s imperative to maximize them. That’s how you end up doing episodes of “Hot Ones,” or TV and movie cameos, or having comedians other than Joe Rogan and Joey Diaz talk about you on their podcasts. Or, hanging out with the President of the United States.

Another critical component to consider is that while visible political cheerleading might not be an avenue every fighter wants to explore, it’s an opportunity the UFC can uniquely provide, especially in the Trump administration. UFC President Dana White isn’t a stranger to financially backing to the blue side of the political aisle, as a long-time supporter of former Nevada Democratic Senator Harry Reid, and donating $5400 to Democrat Catherine Cortez Masto, who filled the outgoing Reid’s seat in 2017. However, White – and by extension, the UFC’s – connection to the current President is much more profound. Not only do White and Trump count themselves as friends dating back nearly 20 years to when Zuffa took control of the UFC and staged its first card, UFC 30, at the Trump Taj Mahal in Atlantic City, but we’re only a month removed from White, of all people, speaking at the Republican National Convention. Oh, and he’s donated over $1 million to Trump’s 2020 re-election campaign.

Masvidal rallying for Trump isn’t transformational, it’s transactional. Everyone here is just scratching one anothers back: Trump gets to court the Latino vote and seem hip-and-with-it to easily persuaded sports fans; Dana White gets to act as if he’s doing a favor for both the President and one of his own stars while simply looking to promote the UFC product; and Masvidal gets a crack at a level of mainstream exposure few fighters could dream of. Other than perhaps your own individual disagreement or disappointment with Masvidal’s choice, there really is no downside for him here. I struggle to imagine too many consumers who would be dissuaded from watching Masvidal’s next fight on account of throwing public support behind Trump. If anything, the sort of person who would be inflamed over that decision will still end up watching, since it will likely offer the possibility of him punching the face off of the far more politically toxic Covington.

No matter how vociferous the “Keep politics out of the sport!” contingent is in the MMA community, it’s always a fool’s errand to even consider the possibility. MMA, like any sport, has a multitude of intersectional issues with the political world. Yet, ironically, despite appearing so politically overt, Masvidal stumping for Trump isn’t really politics, it’s posturing. His support isn’t going to help anyone decide who the want to be President, but it very well might make someone decide to buy the next pay-per-view he’s on and for Masvidal, that’s the only vote that matters.