KHABIB NURMAGOMEDOV’S manager says there is more chance of his man fighting Floyd Mayweather in the Middle East than Conor McGregor taking on Manny Pacquiao.

McGregor sensationally revealed he would fight Pacquiao in a series of tweets.

Khabib Nurmagomedov will defend his lightweight title next against Justin Gaethje – but could he fight Floyd Mayweather down the line?[/caption] 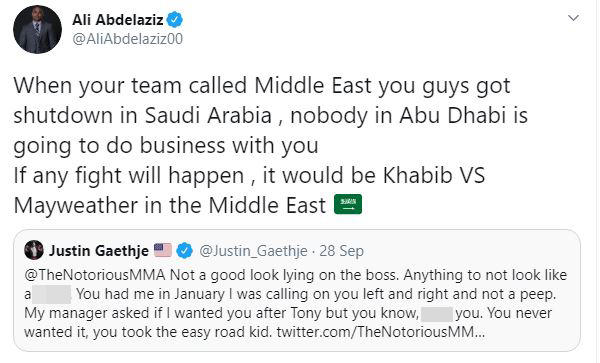 The Filipino then confirmed that this would happen – but a date and venue has yet to be decided yet.

Ali Abdelaziz has laughed off the fight actually happening – and thinks Khabib versus Mayweather is more likely.

The 42-year-old quotes a tweet sent out by UFC interim lightweight champ Justin Gaethje, who fights his man Khabib next.

Gaethje had used social media to slam McGregor for ‘never wanting it’ and ‘taking the easy road’ in dodging a fight with him.

Then Abdelaziz chipped in with his two pennies’ worth.

He wrote: “When your team called Middle East you guys got shutdown in Saudi Arabia, nobody in Abu Dhabi is going to do business with you.

“If any fight will happen, it would be Khabib vs Mayweather in the Middle East.”

He then cheekily posted: “I just talk to the king of boxing in the Middle East, nothing done without him and he told me the Irish guys are full of s***.”

Many expected McGregor to chase a rematch against Khabib in UFC after his devastating stoppage defeat to the Russian in 2018.

But the 32-year-old Irishman has decided to pursue a second foray into the boxing ring.

He previously fought another of that sport’s legends, Mayweather.

But that ended in a tenth-round stoppage defeat. Most are predicting him to be a loser again when he fights four-weight world champ Pacquiao.

Mayweather, meanwhile, has been linked with a boxing return – in an exhibition fight against YouTuber Logan Paul.

Unsurprisingly, this hasn’t gone down too well with some of the purists of the sport.