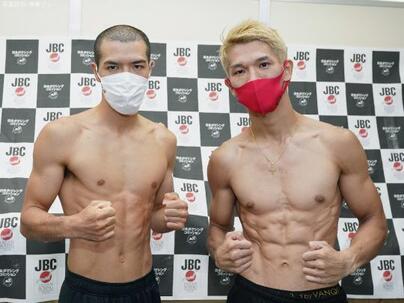 Originally the bout was supposed to be in early September, though got pushed back after a Jorge Linares' positive PCR test, which forced Teiken to close. That was one of a series of delays for Ogawa's return which had also been pencilled in for the spring and again for August.

Today, ahead of their bout, the two men took part in their weigh in and both men made weight with room to spare.

For Ogawa this will be his third bout after suffering a 1 year suspension from the JBC for testing positive for a steroid, which is assumed to have been in a skin cream for eczema, following his bout with Tevin Farmer. Coming in to this bout he is ranked in the top 10 by the IBF, WBA and WBO and knows that another win here will push him towards a world title fight.

As for Nishitani this is his first big fight since beating Shuhei Tsuchiya way back in March 2017. That win netted him the Japanese Lightweight title, though sadly he vacated the title and has toiled ever since with a string of unmemorable bouts. At the age of 33, and with his 34th birthday coming in February, this is a must win bout for him.

Sadly the card will not be shown live, though will be aired early next week on tape delay, on G+.