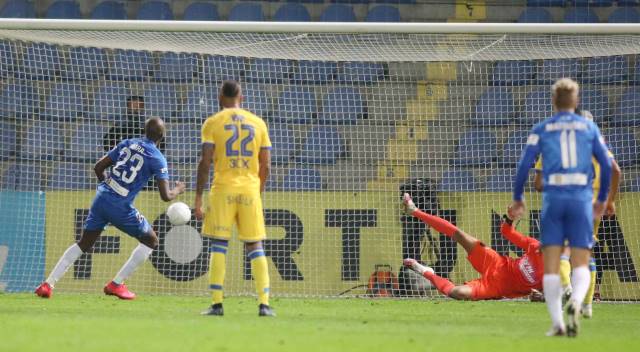 A penalty in the second minute of added time by Mara gave Liberec the win against Apoel in the playoffs for the group stages of the Europa League. This was the fifth time that Apoel had reached this stage and failed to progress.

Marinos Ouzounides sprung a couple of minor surprises to his starting eleven re-instating Mousa Al-Taamari after dropping him in the last couple of games  in place of Anzili while young Cypriot defender Shelis got the nod ahead of the Brazilian Santos.

Al-Taamari repaid his coach’s trust and got off to a lively start forcing the Czech team to commit a number of fouls in order to stop him. From one of these Nuhiu looped a header onto the top of the crossbar.

As the half wore on Liberec started to take the upper hand without though creating any kind of goalscoring opportunities.

In fact it was Apoel who almost snatched the lead on the half hour but Liberec’s goalkeeper Nguyen was quick off his line to thwart Ndogala.

Apoel begun the second half as they did the first pushing Liberec into their own half and should have taken the lead in the 55th minute but Nuhiu somehow hit  Nguyen from two metres out with the goal at his mercy.

Al Tamaari then miscontrolled the ball in the penalty box giving the chance for Tijani to block his path while Anzil’s goalbound effort was diverted for a corner by an outstretched leg.

Then with the game heading for extra time Geraldes rather inexplicaby handled the ball in the penalty box and Swedish referee Ekbert pointed to the spot. Mara sent Silva the wrong way to give his team a rather undeserved win.

Don’t expect a quick COVID recovery for the global economy