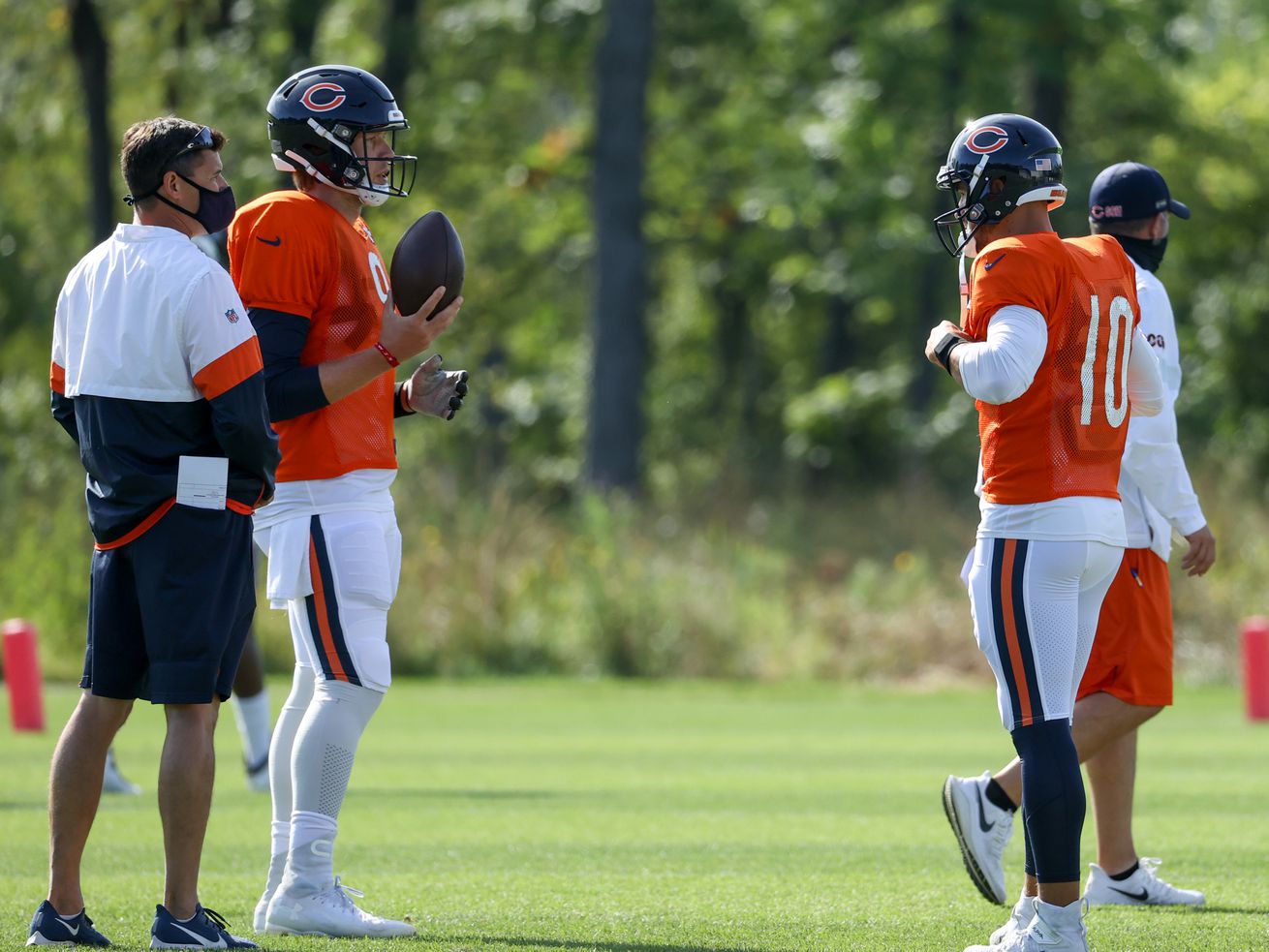 The Bears got the decision to pull Mitch Trubisky from Sunday’s game right — Nick Foles took his place, rallied the team for three fourth-quarter touchdowns and left Atlanta with a win. So, was it the wrong decision to name Mitch Trubisky the starter four weeks ago Friday?

The Bears got the decision to pull Mitch Trubisky from Sunday’s game right — Nick Foles took his place, rallied the team for three fourth-quarter touchdowns and left Atlanta with a win.

So, was it the wrong decision to name Trubisky the starter four weeks ago Friday?

“No,” offensive coordinator Bill Lazor said Thursday. “Obviously, it’s the head coach’s decision. But as you can imagine, we spent a lot of time as a staff talking about it and I think we made the best decisions we could make at the time, each time. You know, this isn’t the first time we’ve gone through this.”

It might not be the last time, either, given that Foles has never started 13-straight games — the distance between now and the season finale — in the same year. But, at least until kickoff Sunday against the Colts, the Bears believe they have the right guy under center.

“I think we all had confidence in Nick as he arrived here … because a number of the coaches here had been with him before,” said Lazor, his quarterbacks coach with the Eagles in 2013. “So I think that’s different than some situations when you bring in someone you don’t know at all.

“I think the most important part of it is watching how Nick prepared through the first three weeks of the season gave me great confidence, personally.”

Lazor was impressed by Foles’ level of engagement as the backup — from taking practice turns while standing behind the first team, like a shadow-boxer, to being involved in meetings and game-plan sessions.

“All the things that an NFL quarterback is supposed to do — and that a great backup does,” Lazor said. “And so, when you watch it daily play out like that, I know for me personally, that gave me great confidence he’d be prepared.”

He didn’t take snaps with the first team last week, but it didn’t show — after entering the game in the third quarter, Foles went 16-for-29 for 188 yards, three touchdowns and a 95.2 passer rating. His lone interception was caught by Allen Robinson in the end zone, called a touchdown and then overturned on a controversial decision.

Foles, Lazor said, has “special qualities” — how he processes and applies the avalanche of information thrown his way.

“You’re hit with meetings and film study, playbooks and all this information, conversations with other players, conversations with coaches — all this other stuff is going in all the time,” Lazor said. “The great ones have to take that, kind of file it in an organized way inside their brain and then all of a sudden, boom, a defense pops up with a play, and then, using that information, to physically execute. It’s a lot. There’s a lost stored in there. I think he does a great job handling a whole bunch of information and applying it.”

Foles doesn’t have to be great Sunday. He doesn’t even have to be as good as he was in the comeback. But he needs to be steady in the way Trubisky never was.

“Nick has a lot of wisdom from all this time, all the locker rooms he’s been in and all the teams he’s been on, the players he’s had to deal with both as a starting quarterback and a backup quarterback,” Lazor said. “What you see every day is him using that wisdom and really going out of his way to help build the team the way that the quarterback can. Because the quarterback’s in just a little bit different position than everyone else.”

The Bears know that, more than most franchises.

The 10 Scariest Movies Ever Made, According To Science

UFC 254 video: If backup off, Michael Chandler targets Tony Ferguson: ‘He’s got a screw loose, he fights like it, and it’s admirable’