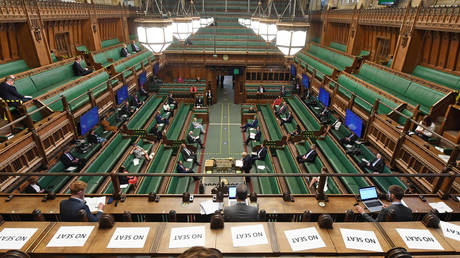 SNP MP Margaret Ferrier has been suspended by her party after admitting she’d traveled to parliament in London despite having just been tested for Covid-19. And a positive result did not stop her taking a train ride back home.

Ferrier revealed on Thursday that, on Monday, she had undertaken a more-than-400-mile ride from her Rutherglen and Hamilton West constituency in Scotland to attend the Commons in London.

“I apologize unreservedly for breaching Covid-19 restrictions by traveling this week when I shouldn't have. There is no excuse for my actions,” she said in a statement on Twitter.

“On Saturday afternoon, after experiencing mild symptoms, I requested a Covid-19 test which I took that day. Feeling much better, I then traveled to London by train on Monday to attend Parliament as planned.”

On Monday evening, the politician’s positive Covid-19 test returned positive. It was not immediately clear whether she received the diagnosis before or after her appearance in Commons, however she did travel back to Scotland on Tuesday morning.

“This was also wrong and I am sorry. I have been self-isolating at home ever since,” Ferrier added in her statement.

A Twitter post by a local police station, however, suggested the MP had met with officers there on Tuesday after returning from London.

And then (according to this tweet) met with Police Scotland on Tuesday ???? is @MargaretFerrier on a mission to infect as many people as possible. pic.twitter.com/leXMR1qi6g

Ferrier’s revelation sparked a statement from Parliament, with a spokesperson from the House of Commons pointing out that Westminster has its own “dedicated team to support the test-and-trace teams across the UK.”

“We are also implementing a number of cleaning measures to ensure those working on the Estate can maintain a clean and hygienic working environment,” the spokesperson added.

The daring train ride has not only triggered an unscheduled cleanup in the Commons, but has spelled trouble for the politician herself, as the Scottish National Party has suspended the MP.

“Margaret will be referring herself to the parliamentary standards commissioner as well as the police. I am tonight suspending the whip from Margaret,” SNP Westminster leader Ian Blackford stated. Party leader Nicola Sturgeon described Ferrier’s actions as “utterly indefensible.”

The MP’s behavior also sparked something of a furor online, with scores of Twitter users flocking to her apology tweet to vent their anger.

Then I waited till Thursday to tell everyone, I want it to be a surprise when they find out they’ve been spreading it around their families.

Apart from condemning the politician’s recklessness, many brought up the earlier scandal around an alleged breach of lockdown rules by PM Boris Johnson’s special adviser, Dominic Cummings.

Back in May, Cummings admitted to traveling across the country by car – after his wife showed symptoms of Covid-19. While his career was ultimately unaffected by the whole affair, Ferrier – quite ironically – was among the most vocal critics of the official, and even called for Cummings to resign.

I expect Nicola Sturgeon will continue to back you despite undermining public trust in lockdown rules.
Image from @SteveSayersOne timeline pic.twitter.com/6dQXC8TPGF

Clearly, you knew the rules in May.. pic.twitter.com/CV3rjpxorL

The MP appears now to be facing the very same criticism from an outraged public, as well as from fellow politicians. Scottish Labour MP Ian Murray branded her behavior “astonishing recklessness.”

How Self-Disinfecting Surfaces Could Save Lives

The Guardian tells what awaits Russia if Biden wins