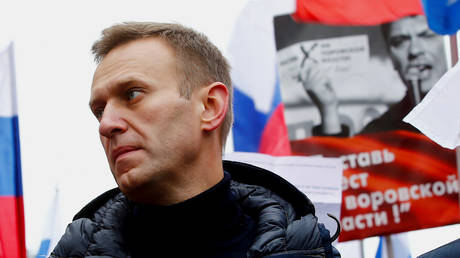 A dramatic day of verbal hostility has led to Russian opposition figure Alexey Navalny announcing his intent to sue President Vladimir Putin's spokesman. The threat came after the Kremlin accused Navalny of working with the CIA.

Germany's Der Spiegel magazine published a sensational interview with Navalny on Thursday, in which the anti-corruption activist, who is recovering in Berlin from a suspected poisoning, says “I assert that Putin is behind [the crime], I don’t see any other explanation.”

“Probably, it is not the patient [Navalny] who works for the Western special services, but that the Western intelligence services who work with him – this would be more correct [to say]. I can even be specific: these days, specialists from the Central Intelligence Agency (CIA) of the United States of America are working with [Navalny].”

Navalny immediately fired back on his blog: “This is a direct allegation from a government official. Therefore, first of all, I am taking legal action against Peskov. And secondly, I demand that the proof and facts that suggest I am ‘working with specialists from the CIA’ are published. Put it straight on television, in prime time. You have my permission”.

In the same press call on Thursday when Peskov linked the anti-corruption campaigner to the CIA, he responded to Navalny's interview by saying: “We believe that such accusations against the Russian president are absolutely unfounded and unacceptable, and furthermore, we find a host of these statements completely offensive and inexcusable”.

As tensions mounted, members of Russia’s State Duma continued to throw their weight behind Peskov. According to its website, speaker Vyacheslav Volodin called Alexey Navalny a collaborator of Western intelligence agencies. “Navalny is a shameless person and a skunk. Putin saved his life. If what happened to him had been orchestrated by the intelligence services of Western countries, then his statement fits perfectly into the scheme of things.”

“Everyone genuinely worked to save him – from the pilots and doctors to the president. And only an ingrate could make such statements.” The head of the legal team at Alexey Navalny’s Anti-Corruption Foundation, Vyacheslav Gimadi, confirmed that the lawsuit would be addressed to Dmitry Peskov’s home address, and would fall under the jurisdiction of the Presnensky district court in Moscow.

University of Arizona accused of 5 Level I violations by NCAA

Why We Need an Early Warning System for Infectious Diseases