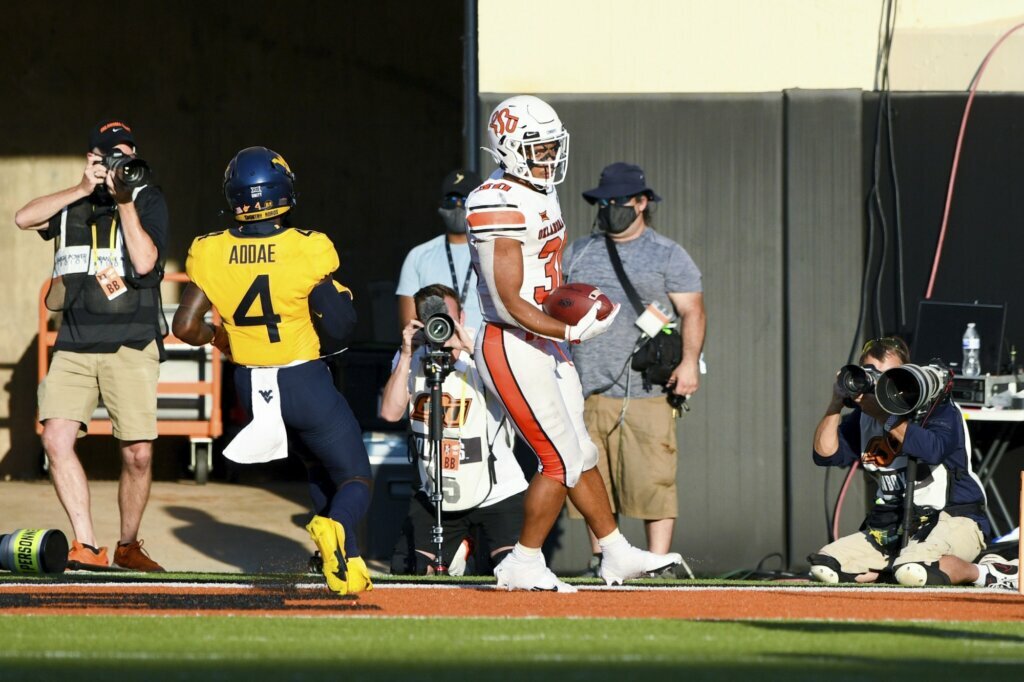 After watching Bedlam rival Oklahoma lose to Kansas State, the Cowboys are suddenly in prime position in a topsy-turvy Big 12. They will be heavily favored to improve to 2-0 in the league when they visit Memorial Stadium on Saturday, then have struggling Iowa State before a potentially huge showdown with Texas. At stake for the Jayhawks is the progress they’ve been trying to make under second-year coach Les Miles.

Oklahoma State RB Chuba Hubbard against the Kansas defense. The Heisman Trophy candidate only has 194 yards and two TDs through his first two games, which means he is probably primed for a breakout performance. It could come against the Jayhawks’ porous rush defense, which is giving up 194 yards per game.

Oklahoma State: LBs Amen Ogbongbemiga and Malcolm Rodriguez form one of the best tackling duos in the Big 12. Each has 17 tackles and a sack already this season. They will be largely responsible for slowing down all-conference RB Pooka Williams, who is the Jayhawks’ most dynamic offensive threat.

Kansas: QB Jalon Daniels got the start last week at Baylor with Thomas MacVittie dealing with a shoulder injury. And while the freshman was just 19 of 33 for 159 yards through the air with 14 carries for 23 yards on the ground, he showed enough mastery of the offense and natural athletic spark that he’s the clear future for the Jayhawks at the position.

The Jayhawks have not beaten Oklahoma State in Lawrence since Oct. 29, 1994. … Kansas will unveil bronze statues of former stars Gale Sayers and John Hadl outside the football complex at halftime Saturday. … There will be 10,000 fans allowed after Kansas prohibited any fans for its opening loss to Coastal Carolina. … Oklahoma State has won 70 straight games when holding its opponent to fewer than 20 points, the longest active streak in the Football Bowl Subdivision. … Hubbard (101 yards) and LD Brown (103) gave the Sooners two 100-yard rushers in last week’s win over West Virginia. … Jayhawks RB Velton Gardner set a career high in carries with 14 for 70 yards last week against Baylor. … Kansas has not beaten a ranked opponent since Georgia Tech on Sept. 11, 2010.

More than 20 coronavirus cases traced to Trump rallies in Minnesota

BREAKING: Riot Erupts in Philadelphia After Black Male is Shot By Police While Charging at Them With a Knife (VIDEOS)