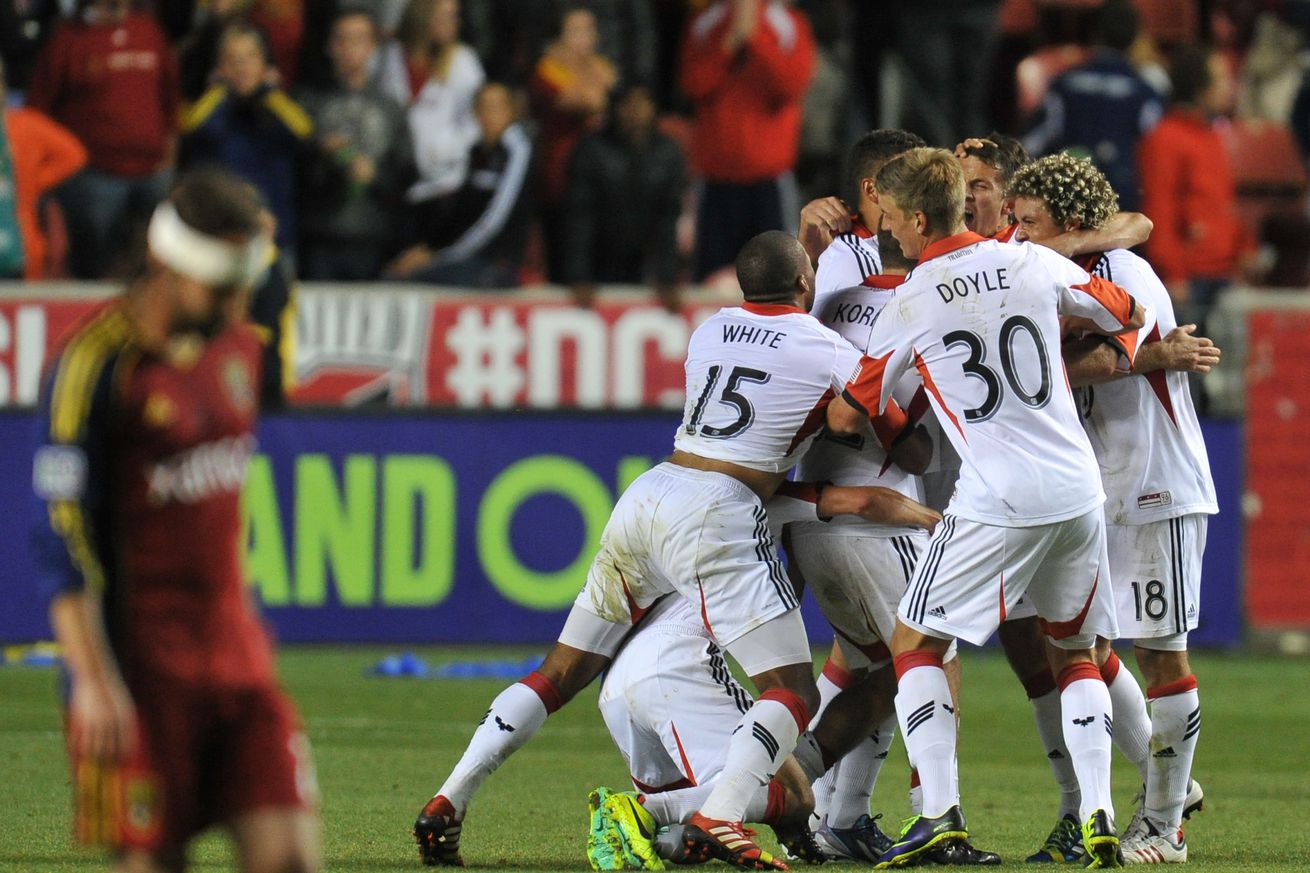 It was the worst match I’ve ever seen in person.

Seven years ago today, I witnessed what became my least favorite match at Rio Tinto Stadium.

It’s probably the worst match I’ve ever seen in person, and I’ve seen some real stinkers from Real Salt Lake over the years.

A match RSL was not just widely expected to win, but a match with a result that seemed nearly inevitable.

A match for which I still haven’t watched the highlights.

Real Salt Lake facing D.C. United. One of the teams, competing for the Supporters’ Shield. The other, at the bottom of the table.

That bit about not having watched the highlights? That changes now. Come along with me on this journey, if you’d like. Let’s talk about it.

The match started almost as you’d expect. D.C. United was doing a lot of defending. There were a lot of unsuccessful passes from both sides. RSL was seeing the ball in the center of the park.

The first chance came in the 27th minute. Sebastian Velasquez had a little bit of craft in the attack, shimmied left, and passed right. He drew a center back out of position with that move, and he found Joao Plata inside the box with a neat pass. (Remember: Velasquez had made it into our first team rotation at this point and was playing very well.)

Plata’s shot would have beaten Bill Hamid, but it also beat the goal. A shame. But it was a first shot, and it was a start.

Another shot. A very optimistic look from Alvaro Saborio, who had created plenty of magic in his day.

Minute 39. Javier Morales, crafty dribbler he is, is fouled on the right flank just outside the box. It’s a good position, and he already sent in a good cross.

Minute 45. Almost halftime. D.C. has a surprise attack on their left side. John Thorrington, a fringe national team player — and not even a regular minutes-earner for his side at that point — came down the left flank, beat Tony Beltran and Kyle Beckerman, and sent in a pass that popped up, caught RSL center back Carlos Salcedo on the arm, and fell to a completely unmarked Lewis Neal.

A player that was on trial with Real Salt Lake in 2012.

Sebastian Velasquez is ball-watching. Ned Grabavoy is outside the box.

But the real shame of this is that Carlos Salcedo, who has gone on to be a brilliant center back, is facing his own goal, and he tries to flick the ball away from himself. He only succeeded at putting the ball into the position that hurt us most dearly. Of course, he’s defending Dwayne De Rosario, who, at that time, was very good, and apparently very good at making young defenders look silly. (I believe this might have been the match where one Jason — who you might remember from the first iteration of Off the Crossbar, or from Twitter, was smashed in — well, you know — by a shot during warm-ups.)

Oh. The shot? A low, scorching shot that went to Nick Rimando’s left.

Then, before the first-half whistle blew, Kyle Beckerman sent a shot not too far wide from distance. (I think it curled when it shouldn’t have. That’s my guess.)

Still, that was just the first half.

The second half? That could have been our hope, right? Right?

It appears Kyle Beckerman is tripped by the referee. It is probably accidental. I am still mad about it. Nick DeLeon sends a shot just wide as a result. (Oh, Nick DeLeon? The one who came out of RSL’s academy but we weren’t able to sign, for one reason or another? Yeah.)

Minute 59. Sebastian Velasquez hits the crossbar on some very neat dribbling into the box. It could have been a brilliant, career-defining goal. Instead, it was simply a chance he carved out himself that came to nothing.

Then, the desperation comes.

Ned Grabavoy is in the box winning headers. Nat Borchers is playing up. Alvaro Saborio is taking shots. It continues that way for some time.

90th minute. Nick Rimando tackles a player well outside the box. He is our only defender. He is shown a yellow instead of a red. Lucky us. It’s desperate,

Stoppage time. Devon Sandoval tries a bicycle kick in the box. It goes right to Hamid. It is probably our best chance in 30 minutes. He probably should have left it for Saborio, who has run free of the defense.

Even more stoppage time. Saborio gets free on a corner, heads the ball at the ground. It hits James Riley’s foot; it pops up; it hits the crossbar.

The opposition celebrated in the north end, almost directly in front of my seat in section 35. I remember sitting and watching for much longer than I probably should have, stewing in the misery, letting it engulf me. I wanted to know what it felt like. I don’t know why. “A million-in-one shot,” I thought.

I watched them all celebrate.

Perry Kitchen, who later became one of the best defensive players in the league.

Bill Hamid, the one hope D.C. United had. He had just four saves on the night.

And I thought sitting in the muck would help me feel better about it. I never wanted to see another team celebrating like that at Rio Tinto Stadium.

In some ways, that was the last time I saw a team celebrate like they’d won a trophy at Rio Tinto Stadium.

To date, we haven’t hosted another final.

We can talk all we want about the reasons for it, but sometimes I sit back and wonder why I sat there so long. I think Jake was with there with me. He probably was. Maybe he can explain it better than me.

There was a certain romanticism about being there as we lost a cup final.

This team was good, I thought. Jason Kreis was going to return. Garth Lagerwey was, too. I hoped, at least. I didn’t think the leadership team that made so much magic happen in Salt Lake would be unceremoniously dumped at the door. This was, I thought, Utah’s team. The Jazz? They couldn’t unite like soccer could in Utah.

In a way, that makes all this more painful. I thought this was just a blip. I wanted to sit and witness this because I knew the team wouldn’t let it happen again.

I guess I was wrong.

You might think the 2013 MLS Cup Final was worse. It certainly was more miserable to be there in person, I must admit. The match itself wasn’t great, and it was absolutely more painful. But it was a real contest, a good back and forth. It wasn’t at home. There was this beautiful unifying factor about being in a terrible, cold city on a very bad night. The outcome was tragic, but the effort, the circumstance, the unity — it was beautiful.

All there was to do after the U.S. Open Cup Final was to go back home. It was, after all, a Tuesday. I had work the next day.

And that’s why it’s the worst match I’ve ever seen in person.

Tom Chivers: Fake news is nothing new — but how often are elections really 'rigged'?

The U.S. Military Has a Problem: Defending Bases in a War Won't Be Easy