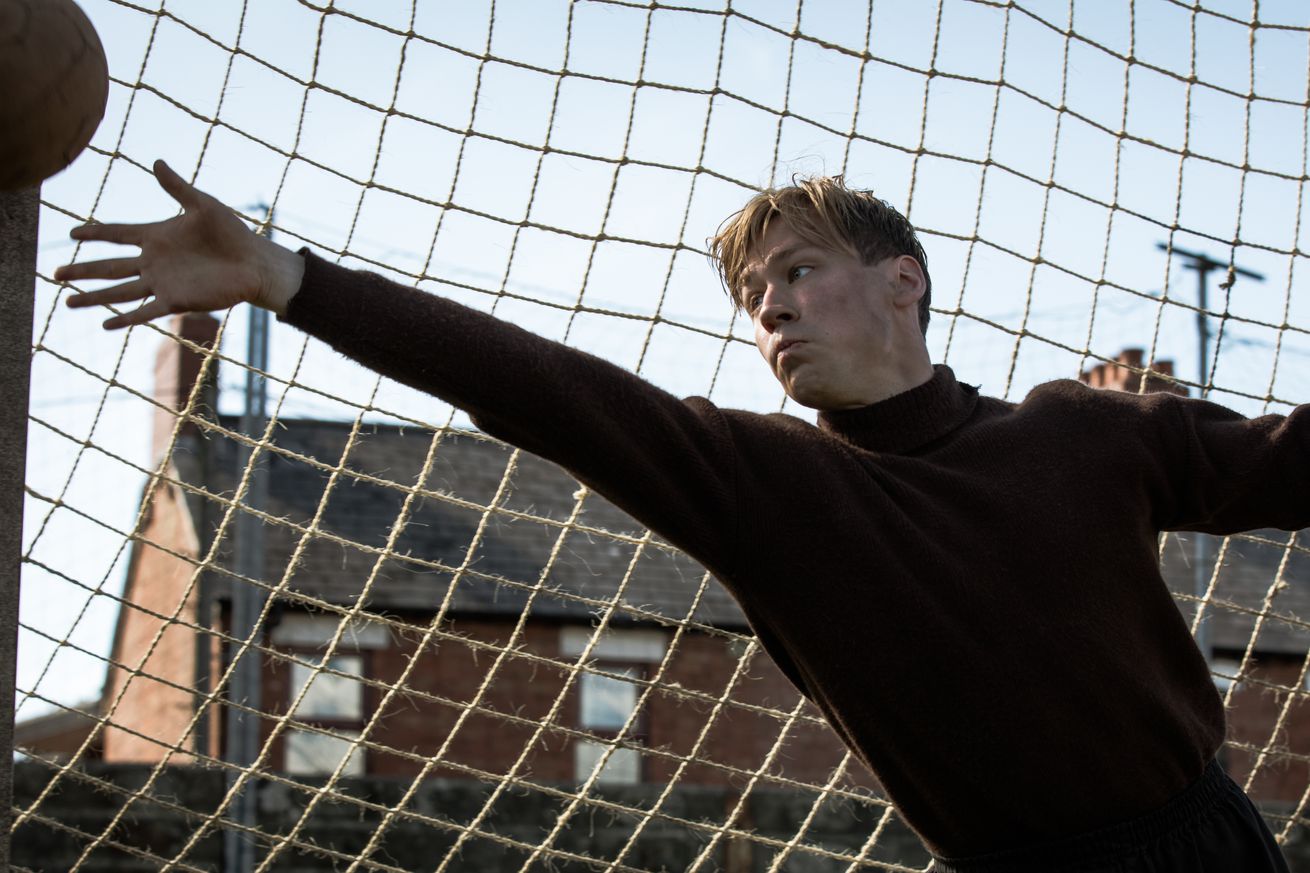 Bert Trautmann biopic opens Friday on the Philadelphia Film Society’s virtual theater platform and other venues across the U.S.

I first heard about Bert Trautmann visiting a used bookstore in Branson, Missouri when I was flipping through books in the sports section and came across the then couple year old book Trautmann’s Journey: From Hitler Youth to FA Cup Legend.

The title of the book alone — not to mention the fact that it was in a book shop in a place derided as Las Vegas if Ned Flanders ran it — was enough to grab my full attention. I read through the it in a matter of days, drawn in at first by the soccer and the fact that he finished an FA Cup final with a broken neck, but kept captivated by the remarkable story of forgiveness and reconciliation at the center of Trautmann’s story.

The 2018 film The Keeper, which releases in select virtual and in-person theaters that are open in the U.S., was a similar experience with the addition of a romantic story arc that while it’s the least memorable or likable quality of the film does give it wider appeal.

As movies based on true stories are known to do, The Keeper skips through a lot of the biographical details and takes viewers right onto the battle field with Trautmann’s capture and details his experiences at a POW camp in England and the journey from sworn enemy to someone Man City fans eventually find it in their hearts to embrace.

His ticket to getting out of the grueling labor of the camp — and an English commander bent on exacting revenge for the death of his wife and child in the air raids that ravaged the country — is his footballing skill. Catching the attention of a local tradesman and manager of a local club being threatened by relegation when he visits the camp, Trautmann (David Kross) reluctantly accepts the role of playing the part of a ringer in between the pipes for the non-league St. Helens Town. His new teammates immediately see through the charade that he’s a new guy in town with a war injury that makes speaking difficult and the daughter of manager Jack Friar (John Henshaw) is horrified at her father’s crass ambition.

When Jack tells Margaret (Freya Mavor) that this new lad can save them from relegation, her response is that they can’t just ignore the fact that he was part of the army that had been sending them into bomb shelters during raids for the past eight months.

Her distrust of Trautmann is all foreshadowing their love story, which is far less interesting than the way he manages to find favor within his team who view him suspiciously before they see how well they play with him not only making saves in the back but starting their counter attacks with his distribution skills.

Honestly, my one criticism of the film is that they don’t spend more time showing how Trautmann earns the trust of his teammates and instead spends so much time on his budding relationship with Margaret and the awkwardness of him having a thing for the manager’s daughter.

While our introduction to Friar is as an opportunist, his relationship with Trautmann ends up revealing the character of both men and foreshadows the spirit of forgiveness that will ultimately lead to a remarkably long career for Man City totaling more than 500 games. One particularly memorable scene with Friar is when he’s unable to even leave the locker room for the start of the second half he’s so nervous and instead peaks through a window pain to check the progress of the match they end up winning to avoid relegation.

Trautmann’s success with St. Helens brings relief to Friar but also draws the attention of a Man City scout, who is there to greet the keeper after the big win. Before he can pursue the opportunity that opens up with Man City, Bert seeks resolution in his personal life and ends up vying with a St. Helens teammate for the affections of Margaret that climaxes in a petty scene where he’s challenged to a penalty kickoff but refuses to participate, letting the other guy score easily because as he reminds him it’s not their decision who she chooses to be with.

Margaret chooses Bert of course and off to Man City he goes. After a disastrous introductory press conference where journalists doing their homework raise all sorts of questions about Bert’s past, the subplot of his Nazi past is pretty much wrapped up with a reference to a rabbi’s public plea for people to give Trautmann the benefit of the doubt.

Bert’s struggle to find acceptance doesn’t really come into play again; instead it’s his heroic (but terribly unwise) performance winning the 1956 FA Cup at Wembley with a broken neck and the tragedy of losing his son that covers the remainder of the film. Ultimately doomed in real life, his relationship with Margaret in the film is strained but ultimately it ends with them in a not so great place while a chance encounter and fist fight with his old POW camp nemesis convinces him to return to the soccer field and play out a career that would end up spanning three decades.

The soccer fan in me of course wanted to see more scenes of him on the pitch and a scene or two from his testimonial match that drew a staggering number of people somewhere in the 60,000 range. In the end though just like the book, The Keeper is so much more than a soccer story. It’s a story about picking up the pieces of brokenness and turning them into something of redeemable worth. Of taking the destruction and devastation of war and turning a new page.

In one of the early exchanges between Bert and Margaret after he starts working at the family’s small grocery she lays into him about his role in a war that robbed her youth and hurt so many people she knew and loved. “I’d rather have danced with you than stood on the battlefield” goes his response.

The real life Bert Trautmann lived a life of remorse, pain and tragedy, but he also rose above it and allowed others to join in and follow him to a new world of forgiveness, acceptance and redemption while overcoming countless odds.

All these years later, there’s a lot we can all learn from Bert still.

Tottenham 3 LASK 0: Gareth Bale gets an assist in huge game for career and Vinicius shines as Kane’s understudy

Single Kelly Clarkson admits she checked out guest Joel McHale’s BUTT on her show and says ‘they caught that on camera!’