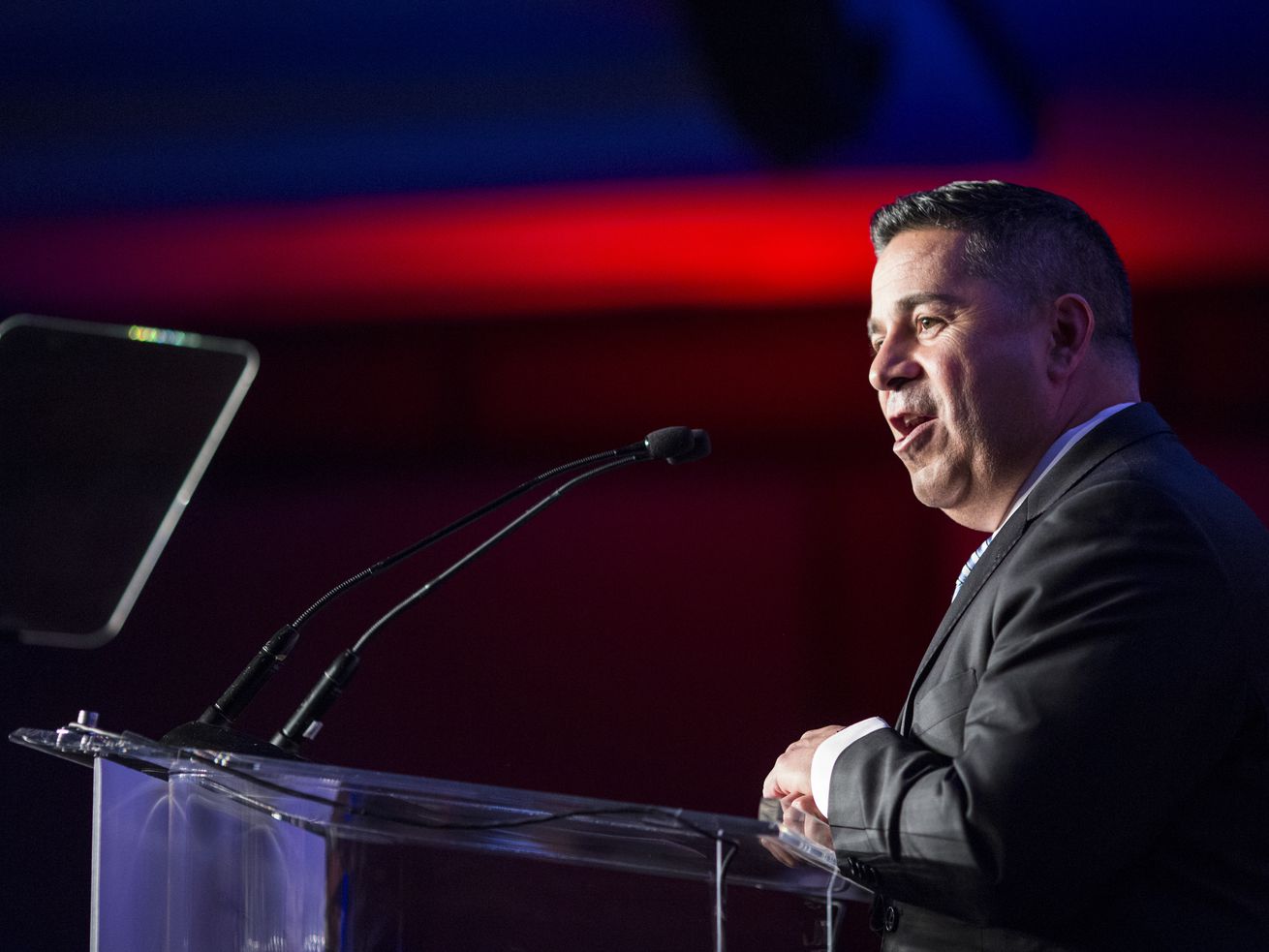 After five terms in the House, Luján is seeking to replace Sen. Tom Udall as one of New Mexico’s senators.

When Democratic Sen. Tom Udall decided not to run for a third term in New Mexico early last year, it opened up a blue-state seat that Republicans initially thought they might be able to pick up, if everything went right for them.

The campaign has not worked out that way.

Rep. Ben Ray Luján, who currently represents the state’s Third District and is chair of the House Democrats’ campaign committee, declared his candidacy for Udall’s seat early and has raced to a substantial lead. His electoral advantage has only solidified as the state’s Latino and Indigenous populations have been hit hard by Covid-19.

Over the past two decades, New Mexico has turned into a fairly reliable blue state. The last Republican to win a New Mexico Senate race was Pete Domenici in 2002. Cook Political Report rates the 2020 race between Luján and Republican Mark Ronchetti as safely Democratic. There’s been little polling in the race, but an Albuquerque Journal poll of 1,123 likely New Mexico voters taken between August 26 and September 2 found Luján with a 9-point advantage in the race over Ronchetti, with a 2.9 percent margin of error.

It’s a familiar story for lean-blue states this election cycle. A state that was once considered a long-stretch pickup for Republicans has simply drifted blue as time and circumstances went on. Now, it feels like a near certainty that Luján will replace Udall, retaining the seat for the Democrats in an ever-contentious battle for Senate control.

Of 100 current senators, just four — Ted Cruz (R-TX), Marco Rubio (R-FL), Bob Menendez (D-NJ), and Catherine Cortez Masto (D-NV) — are of Hispanic heritage. Luján is the senior Latino in the House of Representatives; being elevated to the Senate would bring him instant credibility in a country with an expanding Latino population.

That’s especially true coming from a state where 40 percent of the voter base is Latino, a higher percentage than any other state. “New Mexico politics is almost driven by Hispanic politics,” Gabriel Sanchez, a professor of political science at the University of New Mexico and co-founder of the UNM Native American Budget and Policy Institute, told Vox.

Luján also touts himself as an 11th-generation New Mexican in his campaign advertising. “I’m fourth-generation on this small little family farm,” he told Vox.

While Democratic presidential nominee Joe Biden has sometimes struggled with Latino voters, even losing the New Mexico primary to Sen. Bernie Sanders (I-VT) due to the latter’s popularity with working-class Latinos, Luján is expected to easily carry the state’s Latino vote. “It’s very difficult not to win the Hispanic vote in the state and win a statewide election,” said Sanchez. “Ben Ray Luján being Hispanic himself, that should bode well for him.”

According to the Journal poll, Luján leads with the state’s Hispanic voter base 59 to 31 percent.

But Luján has grander plans for New Mexico voters than just his family legacy and Latino identity. “So many people want to ignore the realities that are impacting communities across the entire United States of America,” he said. “The first thing that has to be done to address inequalities and injustices when it comes to access to health care, educational opportunities, economic opportunities, challenges with housing, whatever it may be, is admitting that they exist.”

The second thing he wants to do is ensure the federal government honors its commitments to the country’s Native Americans, who make up about one-tenth of New Mexico’s population. One goal would be to pressure the Department of the Interior to bring in and include Native voices within the Bureau of Indian Affairs.

“With Native American communities, the federal government has never lived up to its trust responsibilities when it comes to environmental justice, health care disparities, conductivity infrastructure, running water, basic needs like access to electricity, and home health food deserts,” he said.

The state of the race

Republican candidates across the country have had to calculate just how closely to tie themselves to President Donald Trump; Ronchetti, a meteorologist and political outsider who grew up in Vermont, has been caught in the same trap.

“Through the primary, Ronchetti got caught in that difficult position where I think there were a couple of videos where he was speaking to Republican voters where he was distancing himself from Trump,” said Sanchez. “So folks are like, ‘Well, wait a minute. I thought you were a Trump person.’” Ronchetti ended up shaking off the criticism and winning the Republican primary.

The Ronchetti campaign declined an interview request from Vox.

Ronchetti has followed some of the president’s “drain the swamp” playbook: Early in the race, he framed Luján as being “too Washington,” accusing the five-term representative and chair of the Democratic Congressional Campaign Committee of being too beholden to the Washington political sphere.

But that barb hasn’t seemed to stick. Polling averages have the race safely in Luján’s favor. To really drill into the numbers, Sanchez says, look at the greater Albuquerque area, the state’s most populated region, which is key to any statewide victory. While Luján’s congressional district consists of the northernmost part of the state, he’s currently enjoying a 20-point advantage in the Albuquerque metro area.

Ronchetti also faces a significant fundraising deficit compared with his Democratic rival. As of mid-July, Luján had a nearly six-to-one fundraising edge in the race, meaning he’ll be able to dominate the airwaves in an election cycle when the pandemic has seriously cut back on in-person campaigning.

The pandemic has also played a big role. Latino Americans have seen a higher death rate than their white counterparts during the pandemic. The state’s Native population, which includes Navajo and Pueblo tribes, has had it even worse. According to state health data, Navajos made up 45 percent of the total number of Covid-19 cases in the state as of May 14.

“A lot of it hinges on Trump enthusiasm on both sides of the aisle,” said Sanchez. “I think Democrats are banking on Trump’s numbers — particularly in the handling of Covid — continuing to be low, which they perceive is going to really mobilize their base to turn out. And I suspect that’s what’s going to happen here in New Mexico.”

With Luján likely to win this year’s race, it looks as though the state’s Latino and Native communities will pick up an influential voice in the US Senate, regardless of how the presidential election shakes out.

Will you help keep Vox free for all?

The United States is in the middle of one of the most consequential presidential elections of our lifetimes. It’s essential that all Americans are able to access clear, concise information on what the outcome of the election could mean for their lives, and the lives of their families and communities. That is our mission at Vox. But our distinctive brand of explanatory journalism takes resources. Even when the economy and the news advertising market recovers, your support will be a critical part of sustaining our resource-intensive work. If you have already contributed, thank you. If you haven’t, please consider helping everyone understand this presidential election: Contribute today from as little as $3.

Top scientists, NHS staff and business chiefs say Covid ‘hysteria is worse than virus’ – and urge Boris to be ‘rational’

I design $100,000 luxury playrooms for the children of wealthy execs and celebrities. Business is insane right now — here's what my job is like.