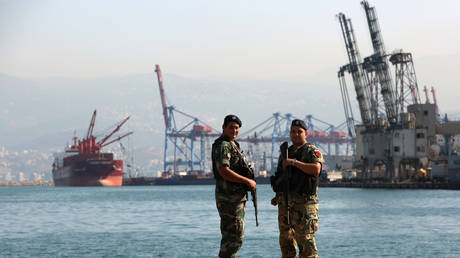 Lebanon is ready for US-mediated talks with Israel to resolve a long-standing maritime border dispute, the speaker of Lebanon’s parliament, Nabih Berri, said. The two nations are technically in a state of war.

The talks will be held under the auspices of the United Nations, at a base near the UN-monitored boundary with Israel, known as the Blue Line, Berri told reporters on Thursday. The Lebanese military will lead the rare direct negotiations between the two nations, which will be mediated by the US.

“This is a framework agreement, and not a final one,” Berri noted.

Israel’s Energy Minister Yuval Steinitz said he will lead the Israeli team in the talks, which are set for October. He said the two sides are likely to speak via a video link due to the coronavirus outbreak.

US Secretary of State Mike Pompeo welcomed the news, saying the agreement to begin discussions on the border issue “offers the potential for greater stability, security, and prosperity for citizens in both nations.”

Steinitz thanked Pompeo for his “efforts and willingness to assist on this important matter,” adding, “I welcome the American mediation and the technical expertise, which will further Israel’s interests during these negotiations.”

Lebanon and Israel each claim around 860 square kilometers (330 square miles) of the Mediterranean Sea as their exclusive economic zone. Both are eager to develop gas fields in the disputed area.

Lebanon’s consenting to mediated negotiation comes as the nation is crippled by a severe economic crisis that was exacerbated by the August 4 blast at the port of Beirut, which killed nearly 200 people and devastated a large portion of the capital.

Beirut and Tel Aviv have no diplomatic relations and are technically in a state of war. Israel invaded Lebanon during its 1975-1990 civil war, and had occupied the southern part of the country until 2000. The Israeli army invaded the Arab nation again in 2006 to fight against the Lebanese-based militant group Hezbollah.