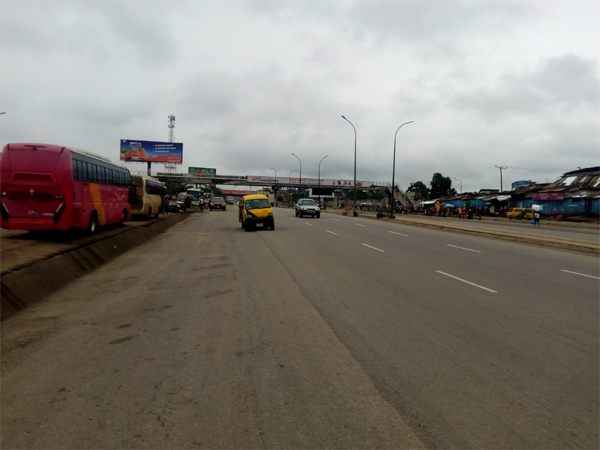 The sit-at-home directed by the Indigenous People of Biafra, IPOB, to protest against the celebration of Nigeria’s 60th independence anniversary and in solidarity with the declaration of Oduduwa Republic recorded total compliance by residents and traders of Onitsha the commercial city, and Nnewi the industrial city of Anambra State.

When Vanguard visited Upper Iweka area of Onitsha, known for its bubbling business activities, the place was a ghost of itself, as business activities were all shut down, including transport companies located there as passengers unlike on any normal day, were not seen.

All the filling stations located around Upper Iweka were under locks and keys while some people were seen walking long distances due to lack of commercial vehicles and tricycles to take them to their destinations.

Vanguard also visited the River Niger Bridge Head where the Army and Police have their permanent checkpoints with their vehicles stationed there but none of the security agencies officials was seen on the road; there was a peaceful atmosphere as few people seen on the road went about their businesses freely.

Filling stations located on the Onitsha-Enugu expressway up to the former Ogbunike Toll Gate were all shut down, however, those located on the streets if Onitsha and environs were seen open for business.

In Aba, business activities were halted in compliance to the sit at home order by the Indigenous People of Biafra, IPOB.

Motor parks were under locks and keys as major roads such as Azikiwe, Asa, Ikot Ekpene, and Aba Owerri roads were deserted.

Vanguard observed that the leadership of the various market unions in Aba opened their gates for business, but there was no trader in sight. Eateries were also closed. Transport operators deserted the roads in compliance with the order.

However, it was a different scenario in the state capital, Umuahia, as markets and other business centres opened while transport operators lined the roads, conveying passengers from one destination to the other. The Isi-gate area was flowing with human and vehicular activities.

A trader at one of the markets in Aba, who gave his name as John Emmanuel, said; “Nobody forced any trader or businessman to sit at home, this is a sacrifice we chose to make for the sake of our freedom. I believe this total shutdown has sent strong messages to the Nigerian government and the international community that we are ready for freedom. We identify with IPOB in their agitation to actualize the nation of Biafra.”

The Abia State Government had planned to visit selected markets across the state to distribute palliatives to traders, as part of activities marking the Independence Day Celebration. However, it could not be confirmed if the event held as traders shunned markets in Aba.

The Secretary to the Abia State Government, Mr Chris Ezem, in a statement, explained that the exercise was in appreciation of the cooperation of the market community towards the fight against the COVID-19 pandemic.

In Enugu, the residents went about their businesses. The sit-at-home was not observed.

In Ebonyi, the sit-at-home was not complied with. When Vanguard went around Abakaliki, the State capital, there were movements as people went about their normal activities as the State Government had earlier cancelled any celebration in respect of the 60th anniversary.

Also, in Imo State, there was no compliance as the people freely went about their daily activities. Markets were opened.

According to one Amos, a commercial bus driver, “What do you mean by sit-at-home? We are dying of hunger and you want to do sit-at-home? It is not possible. We are out for good. Just like you see everybody is out to look for money to provide for their people.

Also, a food vendor at fire service junction, who introduced herself as Madam Emily, said: “The only thing I know is that today is October 1st Nigeria independence and the government did not tell us not to come out and do our business. They say it is a public holiday and you can see I am not a civil servant and I am not working for anybody so I came out to do my business.”