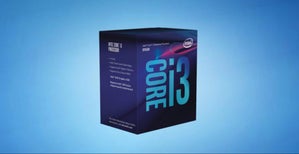 Q: Will an Intel Core i3 processor work for playing games? If yes, will it work if the PC only has 4GB of RAM?

Compared to flagship processors with eight or more cores, contemporary quad-core Core i3 CPUs may seem too weak to handle games. If you have an older Core i3 chip with just two cores and four threads, it might seem even less capable.

But you don’t need to have mid-tier gear for PC gaming. (In fact, we built a $300 gaming PC using a processor that’s more budget than a Core i3 processor.) Your rig won’t be anywhere near as fast as if you had a Core i5 part, but you can still pair it with a graphics card. We suggest selecting a similarly affordable graphics card, with $150 to $200 as the maximum spent. Then tweak the settings until you find a good balance between visual quality and frame rate. Depending on the GPU and the game, you may need to dial down the resolution and/or graphics presets, but you should often be able to find a workable sweet spot.

To read this article in full, please click here

Ratings 2: Who was top man against Man City?