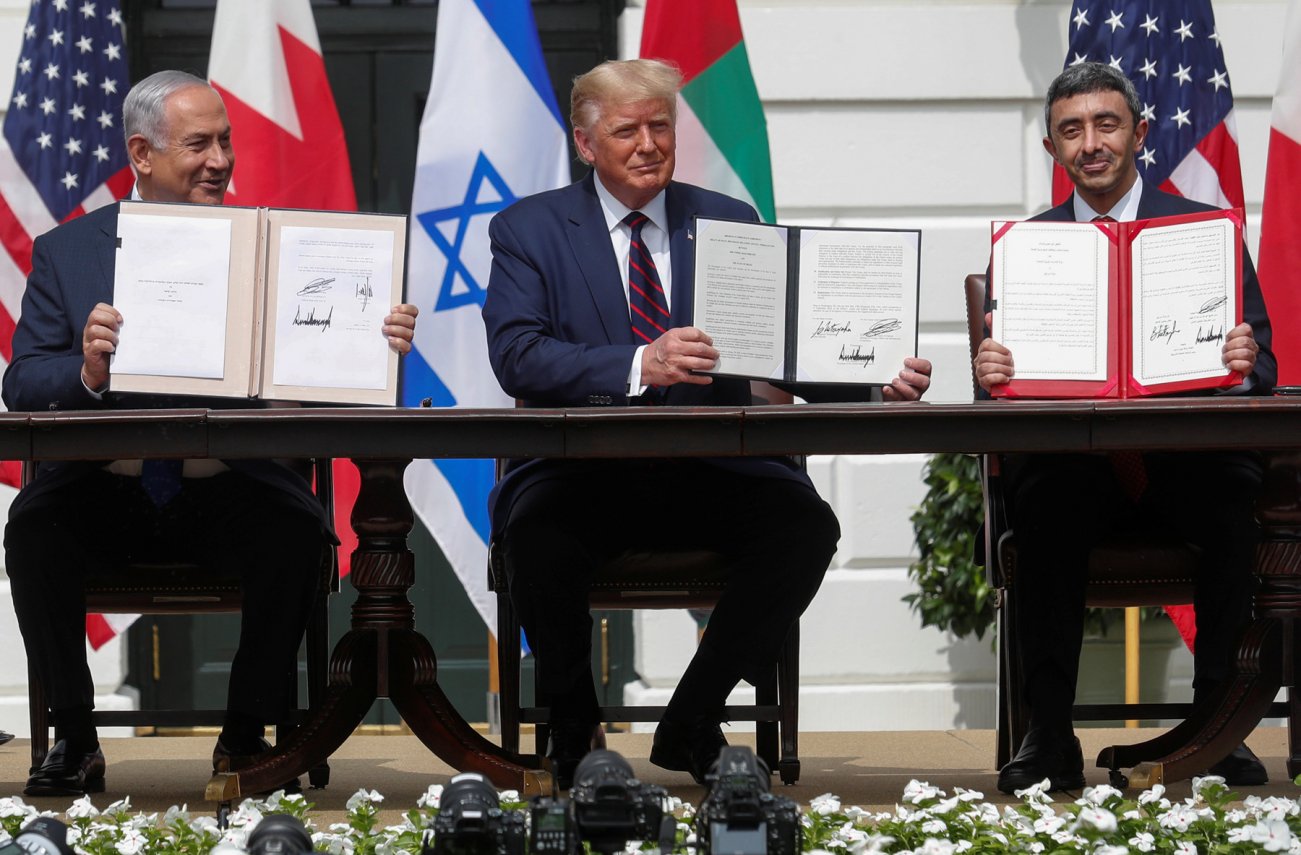 The U.S.-brokered agreements between Israel and the two Gulf States are important milestones in the long diplomatic march toward a broader Arab-Israeli peace.

Bahrain has stepped forward to join the United Arab Emirates, another longtime Arab ally of the United States, in normalizing relations with Israel.

The officials signed two separate documents: the Israel-UAE peace treaty and a declaration of intent by Israel and Bahrain to make peace. There was not enough time to negotiate a final agreement on the second accord since the announcement of the second diplomatic breakthrough on Sept. 11.

The U.S.-brokered agreements between Israel and the two Gulf States are important milestones in the long diplomatic march toward a broader Arab-Israeli peace. These are the first two Arab states to sign peace agreements with Israel since Egypt in 1979 and Jordan in 1994.

U.S. officials lauded the Abraham Accord between Israel and the UAE, named after the biblical forefather shared by Judaism, Christianity, and Islam, as a pivotal and historic hinge event.

The two peace accords are twin achievements of the Trump administration’s “outside-in” negotiating strategy, as well as a vindication of Netanyahu’s longstanding strategy of engaging moderate Arab states that increasingly share some of the same interests and concerns as Israel.

Israel, the United Arab Emirates, and Bahrain all face threats from Shiite Iran as well as from Sunni Islamist extremist groups. All three also are concerned about Turkey’s increasingly destabilizing role in supporting the Muslim Brotherhood and its offshoots in conflicts in Syria, Gaza, and Libya.

The two agreements clear the way for Israel, Bahrain, and the UAE to ramp up trade, investment, technological cooperation, tourism, and most importantly, strategic cooperation against Iran, regarded by all three and the U.S. as the chief threat to regional stability.  Iran’s hostility brought Israel, Bahrain and the UAE closer together, and Iran stands to be the biggest loser due to enhanced Arab-Israeli ties.

The UAE peace accord specifies that “Israel and the United Arab Emirates will join with the United States to launch a Strategic Agenda for the Middle East to deepen diplomatic, commercial and security cooperation together and with other countries committed to peace and non-interference.”  This language suggests a broadening of the Trump administration’s previous proposal for a Middle East Strategic Alliance, which Heritage Foundation analysts called for in an April report.

Not only does Iran need to beware of close military and intelligence cooperation between Israel and the two Arab kingdoms, but the accord also is expected to clear the way for the export of more sophisticated U.S. weapons to the two countries, possibly including F-35 stealth jets and armed drones that were denied in the past.

By facilitating negotiations between Israel and the outer ring of Arab states, the Trump administration sought to jump-start a regional peace process while encouraging greater Palestinian flexibility by depriving the Palestinian Authority of its longstanding veto power over the policies of other Arab leaders towards Israel.

Jared Kushner, who played a leading role in the diplomatic breakthroughs, assessed that the agreements demonstrate that “a lot of the leaders in the region are tired of waiting for the Palestinians” before recognizing Israel to advance their own national interests.

The leaders of Bahrain and the United Arab Emirates have put the interests of their own people ahead of those of the Palestinians, who are resented by many Gulf Arabs for their support of Saddam Hussein’s 1990 invasion of Kuwait. Many Gulf Arabs also are critical of Hamas and other Palestinian Islamist extremists for close cooperation with Iran, their archenemy.

The relatively young and dynamic leaders of Bahrain and the UAE also have been exasperated by the ingratitude of aging and corrupt Palestinian leaders who presumed that they deserved the automatic support of other Arabs to sustain their dysfunctional rule.

Impatient with the diplomatic foot-dragging of Palestinian leaders wedded to unrealistic demands, Bahrain and the UAE are nudging the peace process along.  Both played key roles in supporting the U.S. diplomatic push for Arab-Israeli peace. Bahrain hosted a June 2019 workshop that explored the economic benefits to the Palestinians of the Trump administration’s Peace to Prosperity initiative.

Both countries also have tacit Saudi support for their peace efforts.  Although the Saudis cautiously have refrained from publicly joining peace negotiations, they signaled their support by opening their air space to commercial flights between Israel and the United Arab Emirates and to eastward travel from Israel to other destinations.

Morocco, Oman, and Sudan also are likely prospects to enter peace negotiations with Israel in the near future.  If the momentum can be maintained, then the UAE and Bahrain agreements could breathe new life into the administration’s peace initiative, which was rejected in January by Palestinian leaders clinging to maximalist demands for statehood and the return of hundreds of thousands of Palestinian refugees to Israel.

Eventually, the Bahrain and UAE diplomatic pacts could lead Palestinians to adopt a more realistic negotiating position vis-à-vis Israel and join the other Arab states on the peace train. But regardless of how the Palestinians react, those two agreements represent a quadrilateral diplomatic achievement that will pave the way for closer strategic cooperation against Iran.

'The world is in trouble,' so Sir David Attenborough has joined Instagram

Welcoming stretch of rain before we dry back out