The premier event of the season, the Club Championships took place last weekend with the biggest field the club has ever seen. With over 110 golfers competing between both the Ladies and Mens Championship it truly was a festival weekend of golf.

A huge thank you must go to the greenkeepers who worked tirelessly over the weeks beforehand to ensure the course was set up to be the best it can. What a job they did. With the greens running over 11 on the stimp and some tour standard pin placements in place, it truly was the ultimate test for the participants.

With four trophies on offer nerves were jangling on the 1st tee but it was great to see most players get off to a flying start! Both the Mens and Ladies nett competitions were won comfortably by some superb performances. Simon Harris in the mens who completed his first ever sub 100 round off golf in Day 1, went on to play well in Day 2 as well and claim the trophy by a sterling 15 shots! Similar story in the Ladies with Sheila Hartley playing some of her best golf of the year to take the nett Trophy by 7 shots to three players all tied in 2nd.

Sheila’s steady golf to take the nett prize also led to a close finish in the gross between her and 9 time winner Sam Rowan. However Sheila came up trumps with a par down the last to win by a single shot.

In the Men’s gross it was clear after day 1 that there were only 6 people in with a serious chance of winning the trophy. With 5 to play that was reduced to 4, and with 3 to play and a bogey up 16, 2019 winner Oli Spencer, took himself out of the fray. This left Thomas Tanner and over night leader and 13 time champion, Nigel Munn, to battle it out over the last 2. With Tanner holding a one sheet lead his par down the last was enough to keep Nigel at bay and become a truly deserved winner and Club Champion. 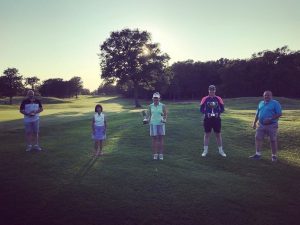 Well done to everyone who played, it truly was a superb weekend of golf.

‘Take home’ lawsuits over COVID infections could be costly for U.S. employers