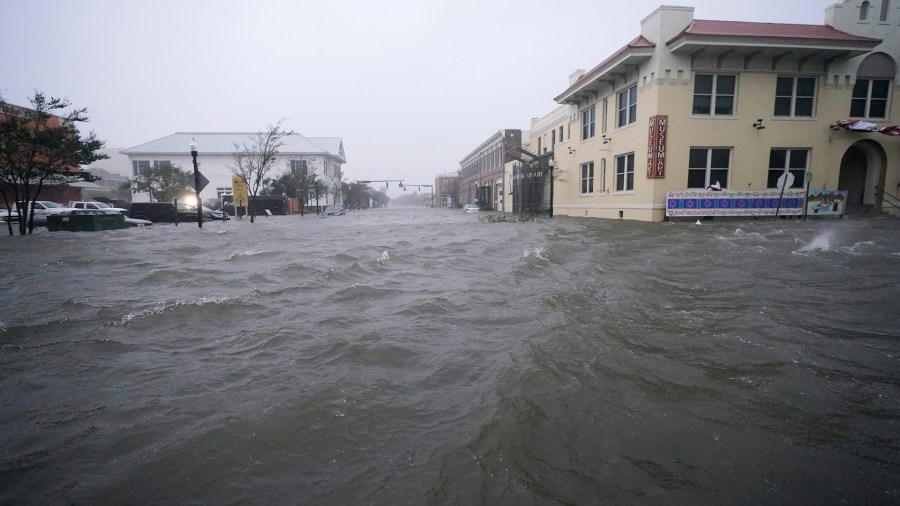 TAMPA, Fla. (WFLA) — Hurricane Sally made landfall between the border of Alabama and Florida Wednesday morning as a Category 2 storm and is bringing hurricane-force winds and catastrophic flooding to parts of the Gulf Coast.

Here are the latest updates on the systems being tracked:

The storm, now weakened to a Category 1, is bringing hurricane-force winds to Pensacola, Florida. The NHC warns “catastrophic and life-threatening flooding” is likely along parts of the northern Gulf Coast.

By 11 a.m. ET, Sally had weakened with maximum wind speeds of 80 mph. The storm is about 15 miles west-northwest of Pensacola.

Sally picked up just a bit of speed in the latest update and is now moving at 5 mph, according to the latest advisory. The NHC says it’s expected to continue moving slightly faster through Wednesday and Thursday.

The latest NHC forecast says Sally will move across the extreme western Florida Panhandle and southeastern Alabama through early Thursday. It will then move over central Georgia Thursday afternoon and over South Carolina Thursday night.

The NHC says storm totals for rainfall will be between 10 and 20 inches with isolated amounts of 35 inches along the Gulf Coast.

“Historic and catastrophic flooding, including widespread moderate to major river flooding, is unfolding,” the NHC said.

A Storm Surge Warning is in effect for:

A Hurricane Warning is in effect for:

A Tropical Storm Warning is in effect for:

Sally became the seventh named storm of the season to reach hurricane strength on Monday.

Hurricane Teddy reached Category 2 strength on Wednesday morning and is expected to continue strengthening this week. The NHC says Tedd could become a major hurricane by late Wednesday night.

As of 11 a.m. ET, Teddy is holding steady as a Category 2 storm with 100 mph maximum sustained winds. It’s about 775 miles east of the Lesser Antilles and moving northwest at about 12 mph.

The latest forecast discussion from the NHC says Teddy could make a close approach to Bermuda in about five days, but forecasters say it’s still too soon to know what type of impacts it could have on the island.

Teddy became the earliest “T” named storm on record when it formed Monday.

Paulette, once a Category 2 hurricane, became a strong extratropical cyclone on Wednesday.

The storm is churning in the Atlantic Wednesday morning, about 450 miles east of Cape Race, Newfoundland. As of 11 a.m. ET, Paulette has 85 mph maximum sustained winds.

Tropical Depression 21 strengthened into Tropical Storm Vicky Monday morning, but it is expected to be a short-lived system.

At 5 a.m. ET Wednesday, the storm had maximum sustained winds of 50 mph, and was about 755 miles west of the Cabo Verde Islands. It was moving west-northwest at about 9 mph.

Vicky is the twentieth named storm of the 2020 Atlantic hurricane season. There is now only one name left on this year’s list of hurricane names: Wilfred.

Other areas to watch

Forecasters are also watching three areas of low pressure in the Gulf and the Atlantic.

Forecasters are also monitoring a non-tropical area of low pressure over the far northeastern Atlantic, a few hundred miles northeast of Azores. The system is expected to head south-southeastward over the next few days and could acquire some subtropical characteristics, according to the NHC. The storm has a low 20% chance of development in the next five days.

The NHC is also monitoring shower and thunderstorm activity associated with an area of low pressure over the far eastern tropical Atlantic, a few hundred miles south-southeast of the Cabo Verde Islands. The system is likely to become a tropical depression in the next few days. It has a medium 50% chance of development in the next 48 hours, and a high 70% chance of development over the next five days.

Role Reversal for US and Post-Brexit Britain