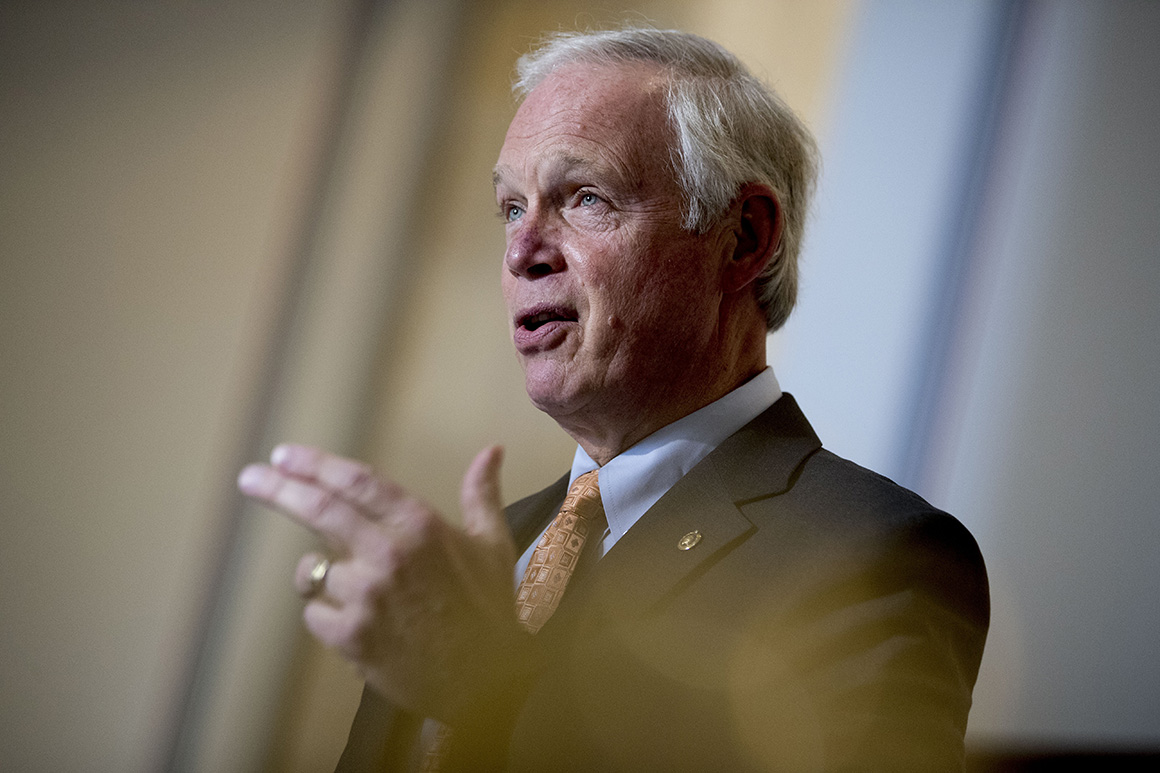 But in a last-minute twist, the GOP-controlled panel decided to scrap a separate vote authorizing a subpoena to Bridget Brink, the U.S. ambassador to Slovakia, as part of the committee’s investigation centering on Joe and Hunter Biden.

In a party-line, Republican members of the committee gave its chairman, Sen. Ron Johnson (R-Wis.), the power to compel testimony from several current and former officials, including former FBI Director James Comey and former Director of National Intelligence James Clapper, who involved in the transition process in 2016 and 2017 as well as the investigation into Russian interference in the 2016 election.

The authorization itself means Johnson will be able to wield the threat of politically explosive subpoenas — some against witnesses Trump has repeatedly styled as archenemies — even after Congress recesses in October and the election draws increasingly close.

After Johnson pulled down the Brink subpoena, Sen. Mitt Romney (R-Utah) indicated that he would have voted against it, which would have effectively killed it. The decision to scrap the Brink subpoena vote was made independently of Romney’s opposition, according to aides, who said Brink agreed earlier this week to testify voluntarily and a subpoena was no longer necessary.

Romney said the Biden investigation “has the earmarks of a political exercise,” citing “recent remarks in the media” — a clear reference to Johnson’s recent public statements indicating that his investigation will denigrate Biden’s prospects in the election. Romney also said it was “not the legitimate role of government, for Congress or for taxpayer expense, to be used in an effort to damage political opponents.”

Johnson is preparing to release an interim report in the coming days on that probe, which examines Hunter Biden’s role on the board of the Ukrainian gas company Burisma. There’s no evidence that Joe Biden or his son were involved in any wrongdoing.

Sen. Kamala Harris (D-Calif.), the Democratic vice presidential nominee, was not present for the vote but was permitted to vote by proxy in accordance with the committee’s rules.

Democrats contend that both probes amount to inappropriate fishing expeditions aimed at tarring Biden, the party’s 2020 presidential nominee. They also say Johnson’s investigations mirror a Russian disinformation campaign. Johnson rejects those charges, calling it a “coordinated smear” against him.

“Our investigation is focused on uncovering and revealing the truth, but Democrats seem intent at every turn to frustrate and interfere without oversight efforts,” Johnson said, accusing Democrats of “obstructive behavior.”

The committee’s action Wednesday targets several high-profile individuals who have long been criticized by Trump and his allies, including former FBI Deputy Director Andrew McCabe, former Treasury Secretary Jacob Lew and more than two dozen others who are will receive deposition notices.

Wednesday’s vote also allows Johnson to issue subpoenas for documents and testimony to McCabe and James Baker, the FBI’s former top lawyer, in addition to top Justice Department official Bruce Ohr and Stefan Halper, who was an informant for the FBI’s counterintelligence investigation that targeted the Trump campaign.

Those subpoenas and deposition notices relate to Johnson’s investigation into the presidential transition period in 2016 and 2017, in addition to allegations that Obama administration officials abused their authority as part of the investigation into Russian interference in the 2016 election. Last month, Johnson subpoenaed the FBI for documents related to that inquiry.

Romney voted in favor of the subpoenas and depositions related to the investigation targeting the Obama administration’s actions during the transition, clearing the way for passage.

The final vote on Wednesday, which was ultimately scrapped, centered on Johnson’s investigation into claims that a Democratic public-relations firm sought to influence the Obama-era State Department by leveraging Hunter Biden’s role on the board of Burisma.

The committee sought to question Brink about “Burisma Holdings and actual or apparent conflicts of interest with U.S.-Ukraine policy,” according to a copy of the committee’s agenda obtained by POLITICO.

“You persist in this course of action despite the fact that you are knowingly advancing discredited claims that our own intelligence community has warned are part of a Russian attack on our democracy,” Peters wrote, adding that the investigation into the presidential transition process “duplicates” the Senate Judiciary Committee’s ongoing review and similar probes that have been already completed, including by the Justice Department’s inspector general.

“Despite my warnings and the assessments of our own intelligence community, you persist in using the committee as a conduit for a foreign adversary’s attack on our democracy,” Peters added.

Senate Minority Leader Chuck Schumer (D-N.Y.) announced on Wednesday that he would introduce a resolution “calling for a cessation of any Senate investigation or activity that allows Congress to act as a conduit for Russian information.”

“While the rest of the country has been focused on fighting a global pandemic, for the last few months the chairman and Republicans of the committee have wasted taxpayer resources to run a hit job on President Trump’s political rival,” Schumer said.

Johnson has denied that his probe has anything to do with the election, but he recently told a radio host that his investigation “would certainly help Donald Trump win reelection and certainly be pretty good, I would say, evidence about not voting for Vice President Biden.”

And earlier this week, Johnson said: “Stay tuned. In about a week we’re going to learn a whole lot more of Vice President Biden’s fitness for office.”

Many of Johnson’s claims mirror those made by Andriy Derkach, a pro-Russia Ukrainian lawmaker who was just sanctioned by the Treasury Department for election interference. Derkach sent packets of information about Biden to Johnson, but Johnson’s office has denied that the senator received anything from Derkach.

In announcing the sanctions, the Treasury Department called Derkach a Russian agent and said he has “waged a covert influence campaign centered on cultivating false and unsubstantiated narratives concerning U.S. officials in the upcoming 2020 Presidential Election, spurring corruption investigations in both Ukraine and the United States designed to culminate prior to election day.”

The committee has been briefed on several occasions related to efforts by foreign actors to interfere in the election. The FBI’s Foreign Influence Task Force briefed committee aides earlier this year about Andrii Telizhenko, a former Ukrainian diplomat who has pushed unsubstantiated claims about Ukrainian interference in the 2016 election. Shortly after that briefing, Johnson scrapped a planned committee vote to issue a subpoena to Telizhenko after some on the GOP side expressed unease about the former diplomat.

Johnson has faced criticism from all sides as he pursues the investigations — from Trump allies who believe he isn’t being aggressive enough and Democrats who say his actions are harming U.S. national security. Moreover, POLITICO reported in August that the CIA is refusing to brief his committee amid intelligence officials’ deep skepticism of the Biden probe.

Kyle Cheney contributed to this report.

Apartments for rent in Antioch: What can you get for less than $2,000?

Is US After China's Semiconductor Industry?