MADELEINE McCann prime suspect Christian B had an accomplice when he abducted the toddler, a Portuguese TV show claims.

Sexta As 9 is set to reveal that detectives believe the 43-year-old German had help when he is alleged to have taken youngster from her bed in Praia da Luz in 2007.

Madeleine was three when she disappeared while on holiday with her family in the Algarve resort in 2007.

Convicted paedophile and rapist Christian B was named as the prime suspect in the 2007 disappearance of Madeleine and is currently serving a one year and nine months sentence for drug dealing.

Sexta As 9 presenter Sandra Felgueiras says in the show, which airs this Friday: “German detectives have confirmed the suspicion” that Christian B “had an accomplice”.

Prosecutor Christian Wolters tells the programme he has clear evidence that Madeleine McCann is dead.

Felgueiras also speaks to Christian B’s lawyer Friedrich Fuelscher, who has promised to reveal a “big” breakthrough in the case in the coming weeks that will clear his client.

Madeleine was staying at this apartment resort when she vanished [/caption] 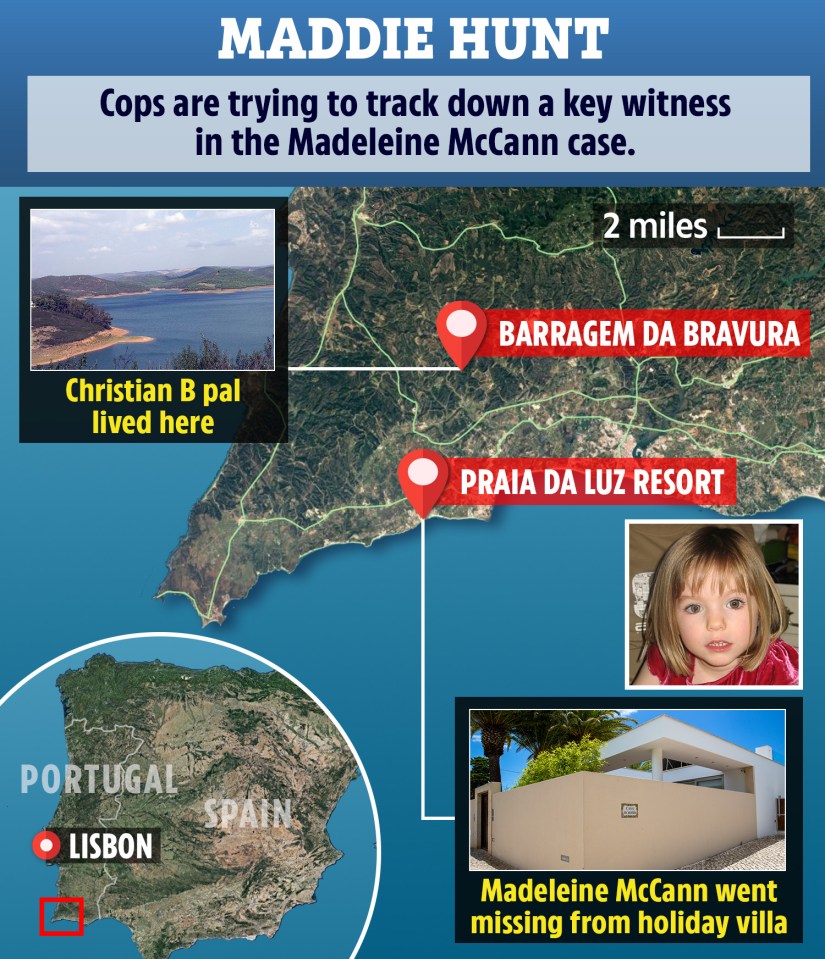 Fuelscher himself last week flew to Portugal where he met Amaral, who led the hunt for Madeleine and wrongly named parents, Kate and Gerry, of Rothley, Leicestershire, as suspects.

Portuguese police sources have said Amaral – who believes the German is a “scapegoat”– will help provide further information to support his claims he was not responsible for the crimes.

It comes as German cops are reportedly hunting a new witness who allegedly lived next to the Barragem da Bravura reservoir where a mystery note was left claiming her body had been dumped.

The man is believed to be an ex-pal of rapist Christian B, who is suspected of abducting and murdering the three-year-old in 2007.

Officers are understood to be treating him as a witness and not a suspect, reports the Daily Mirror.

It is thought he was holed up in a camper van near the remote ‘Reservoir of Wilderness’ which lies nine miles from Praia da Luz.

A note – found outside the flat where Madeleine disappeared – suggested that the three-year-old’s body may have been dumped in the reservoir.

The note, sent to a Dutch newspaper, is said to identify a reservoir as Madeleine’s “final resting place” and allegedly described the murky waters as a “perfect” place to hide a body.

Joe Biden vs. Donald Trump: Who Is Really Better On The Economy?