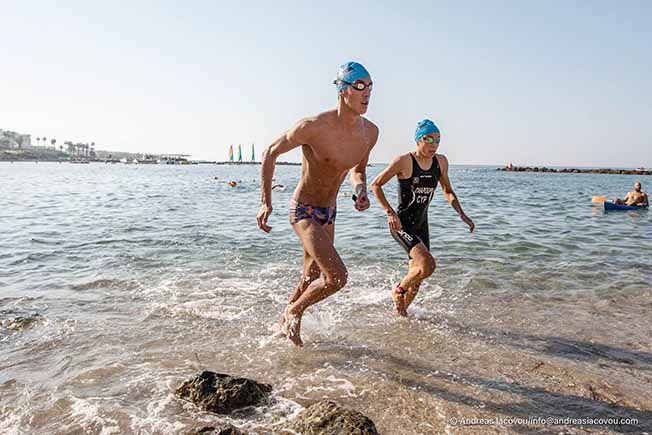 Panayiotis Antoniou and Yiota Hapoupi are the Cyprus triathlon champions in their respective classes for the current year in the Olympic distance edition of the sport.

The pair were victorious in the international Ocean Lava Paphos Cyprus event which took place on Sunday.

The event doubled as the Pancyprian Olympic Distance Championship for the Triathlon Association and was the first triathlon competition for the current year.

This is Antoniou’s second consecutive win in this specific event, while Hapoupi makes this her first win and first podium finish.

This is the third year the event has taken place and is an evolution of the original Paphos triathlon event and is part of the international calendar of Ocean Lava.

In the sprint category, Andreas Agathocleous and Dona Charalambous were the winners. In terms of the participating clubs, the Paphos Nautical Club (Men) and Now Foods Cyprus (mixed group) took first place in the Olympic distance events.

The event was co-organised by the Paphos city council along with Activate Cyprus and Mokapot Productions. More than 250 athletes took part in the event, with the prevailing sentiment being one of enthusiasm for the resumption of the sport following the coronavirus lockdown.

The event implemented all protocols and health and safety guidelines issued by the ministry of health, as well as those issued by the Cyprus Triathlon Federation and was subsequently approved by the same ministry.