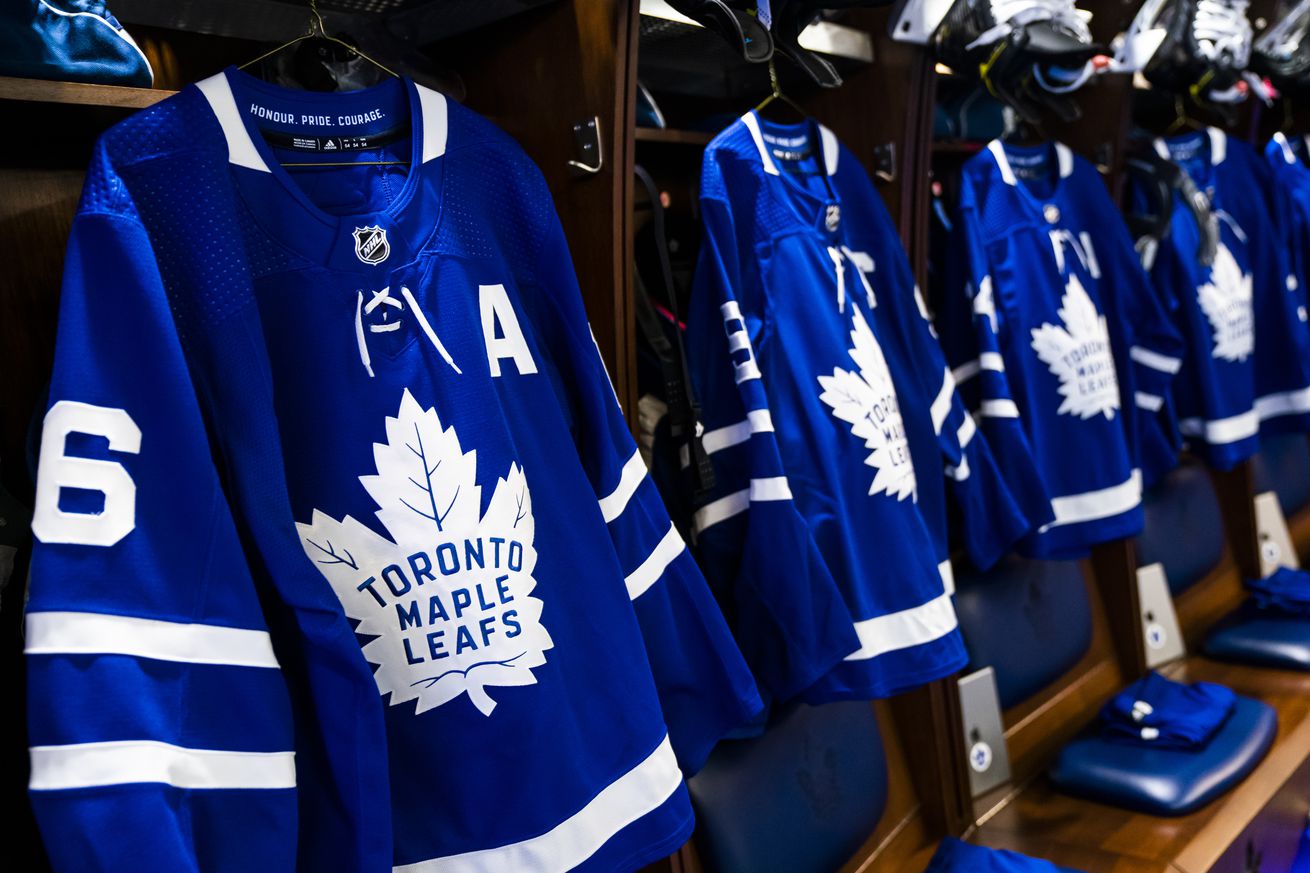 Who gets to wear the Leafs jersey in this imaginary draft?

Last time, I made you help me pick who to draft at 15th overall for the Leafs. And I didn’t rig this draft for an easy answer because I don’t think there is going to be one on October 7. I thought I’d presented us all with a really hard call, and yet, you didn’t have any trouble picking for me.

The story so far:

A pick at 15th could be some player who falls or some player who the public draft rankers have ahead of the professionals, which always makes fans happy. But it could also be a reach that disappoints like Rasmus Sandin did at first. Kyle Dubas might well not pick the most famous remaining player, the one with all the buzz or the seemingly obvious choice.

But beyond that, the choices get tougher the deeper you go in a draft for everyone. By the time you’re at pick 15, every player is imperfect and rapidly getting more so. They don’t necessarily look like stars right now. They aren’t the kinds of draft choices you can crow about to everyone on Twitter. Not unless you take the zippy little winger everyone is in love with this year. Last year Montréal did just that at 15th, and took Cole Caufield who had been ranked ninth. This year, the Habs will take whoever Dubas leaves, so I better get to Dubas’s pick.

Like most polls we do, the winner was obvious after about 100 votes. With just over 500 votes, the proportions have settled down, and Braden Schneider has over half the votes. I’m not shocked, but it’s not my choice, and I think it’s likely a wrong choice made for very poor reasons.

There’s a lot of axioms around hockey, and a lot of them are used to critique GMs. The big one for drafting is “Best Player Available” or BPA vs drafting for need. Axioms are great for math and science, but nothing is ever that simple in a draft. Okay, sometimes it is. Auston Matthews was not a pick that needed to be thought about, but that’s the exception not the rule. The point at which reasonable and informed people can disagree over which player is best comes very quickly after an obvious number one. By the time you’re picking at 15th overall, you might see a player on the list you clearly think is the best player compared to the others. You might have six or seven you wouldn’t kick out of dev camp for fanning on a shot.

BPA is built on an illusion that that there always is one best player and that a ranked list of the objective value of a set of hockey players can always be made. It can’t. You can’t rank a draft with absolute certainty 10 years after the fact. How do you compare the value of Nino Niederreiter and Ryan Johansen or even Taylor Hall and Tyler Seguin?

Without the comfort of the BPA illusion, a GM actually drafting has to choose from the group he believes is essentially equally good. That’s how I felt looking at the players I gave myself to pick from, and in a second I have to pick again for Bergevin and do that very thing. Sometimes there is an obvious choice, when a good player gets passed over by many other teams or is underrated in the first place. But it can’t be a coincidence that over 50% of the votes went to the only defender high on the list. Justin Barron also got more votes than the similarly ranked forwards.

There’s nothing wrong with drafting for need. As long as you’re smart about which need you’re filling. Do I have four top-pairing defenders right now? No? Okay, let’s draft a defenceman and... five years from now I might be able to use him. This is the same fallacy that says you need to draft Askarov so you can trade Andersen.

What about this though: Do I have enough defence prospects? Is there ever really enough? But let’s consider briefly the Leafs and their top prospects. We could even list them off in order, maybe go with the top 25, and we’d come up with: Rasmus Sandin and Nick Robertson in one tier, followed at a distance by New Guy, Mikko Kokkonen, Mikhail Abramov, Timothy Liljegren and Semyon Der Arguchintsev, and then at a much greater distance by a clutch of interchangeable defenders and slight-hope forwards. Without starting the goalie argument again, the two lonely goalie prospects fit in somewhere well below the top tier.

If Sandin and Robertson are in the NHL, which is likely, the population of the next best tier says that the Leafs some of need everything. How soon they’ll need each type of player to promote will depend on how players get traded, fail to live up to expectations or age out of usefulness. Just because there are three young forwards on the top six in the NHL, doesn’t mean the Leafs won’t need a forward prospect they draft this year in five or less years from now. There’s no guarantee whoever they draft will be what they need at the time they need it however.

Reaching for a defenceman because he shoots right is foolish. Believing you must draft at the position you have least of is foolish. Choosing from equally good players each time you draft to have a balanced prospect pool is not, however, a violation of the sacred BPA rule. But one 15th overall pick can only return one player.

There is an expectation in fans that the player taken at 15th is supposed to be a top-pairing defender, a top-line forward or a starting goalie. Since the Leafs have more elite forwards than anything else, well obviously they should get a defenceman who will obviously be great.

I think that expectation is totally wrong, and will lead to constant disappointment at how well a team drafts. Most first rounders are not elite players. By the time you get out of the top 10, the vast majority of them aren’t even excellent players. By the time you hit 15th overall, only 23 of the 58 picks made at that spot have over 200 NHL games played, with only five more recent choices ever likely to join them. Less than half of the players chosen there ever become long-term regular roster players in the NHL. One way to up your odds of picking a bust is by bypassing better players to get the type you’d most like to have.

Braden Schneider isn’t a terrible pick at 15th, and we likely wouldn’t be too horrified by him, but if there are forwards on the list (Mercer, Lapierre, probably some others) who are really likely to be better, that’s who the GM should take. That would be true if the Leafs had zero defence prospects.

At the end of the day, we’re all just guessing (so are GMs and scouting departments) and a look at any draft year shows good players taken all over the place. The BPA axiom is flawed because evaluation of prospects isn’t an exact science. But history shows us that worrying about the type of player (position, height, weight, nationality, etc.) to the exclusion of all else is how you end up with a bad draft record. Schneider could turn out to be the right guess, of course, but if I was ignoring public rankers, I’d have gone for Holloway.

If Dubas uses the pick, the overwhelming probability is he drafts a forward with it.

Back to the Mock Mock Draft

Braden Schneider it is for the Leafs.

The Canadiens are up right after the Leafs, so now it’s their turn.

Marc Bergevin drafts very well. He picks skill over just about any other consideration, and he has the nerve to just ignore traditional thinking. He also defines skill broadly, and ends up with different types of players. He will draft Americans, guys from Ontario, guys from Finland, and he throws the French papers across the room when they whine about it. However, with two mid-round prospects playing in the Q, it’s hard to imagine he’d pass them both by, and he has to have extensively scouted them. If he does pass them over, he has reasons for it.

Holloway might be someone he’d be interested in, too, considering his choice to ignore points and pick a very young NCAA player in Ryan Poehling. Mavrik Bourque, also playing in the Q, is a player he’ll have a firm handle on.

But given the situation, he may draft less like a maverick this year. Mercer seems like too safe and predictable a choice for him, though, so I’m giving the Habs Hendrix Lapierre.

Next up is Chicago, who traditionally draft from the same pool as the Leafs, the Canes and the Habs. Stan Bowman might take Jarvis if he was still around. He might reach for a guy like Ridly Greig, assuming they scout the WHL more than the eastern leagues. He might believe in the DEL players more than I think is reasonable. He might think William Wallinder is the next Victor Hedman, and he might break their pattern of rarely drafting Russians for Amirov. I think he’ll be swayed by Mercer still being available, and choose him.

I let Mercer fall in this mock draft a little because he’s a likely player to just be left unpicked, not because of who he is, but because other players seem like they have a higher potential. Mercer is a consensus number 13, and no one thinks he’s top 10, so he’s not going early. He’s also not exciting enough to be a no-brainer pick over Guhle, Lapierre or Holloway. And Amirov and Jarvis are the types of players to go higher than their rankings if the right team decides to take a chance. They’re also the types of players who might fall below 20 as well.

New Jersey have their second pick at spot 18 and they also pick at 20, so I’ll save them and the Flames for next time.

Just remember: Democracy is the worst.

FanDuel: Running Out Of Gausman