APPLE on Tuesday unveiled the latest addition to its pricey smartwatch range during a live-streamed event from its headquarters in California.

Like its predecessors, the Apple Watch 6 lets you send messages, track your fitness and more – but this year’s offering has an ace up its sleeve.

Apple has unveiled the Apple Watch 6, the latest addition to its pricey smartwatch range[/caption]

The £379 watch – announced Tuesday and out this week – can track the amount of oxygen in your blood, potentially aiding in the detection of conditions like panic attacks and sleep apnea.

Starting later this year, Series 6 will alert users if it detects oxygen levels below what’s considered a “healthy” threshold.

If your reading, known as blood saturation, is too high, you can choose to see your doctor for a health assessment.

The watch can track the amount of oxygen in your blood, potentially aiding in the detection of conditions like panic attacks and sleep apnea[/caption]

Apple did not say whether the Series 6 could help in monitoring Covid-19.

According to Apple, the watch makes the reading by shining infrared light on your wrist to check the colour of your blood.

As well as blood oxygen saturation, the device has a longer battery life than its predecessor, and a new microchip that makes it 20 per cent faster.

Apple said the chip is based on the A13 bionic chip loaded into last year’s iPhone 11 series.

Other new bits include a new always-on display that’s brighter outside, and a host of new watch bands and face designs.

One face features your a memoji – Apple’s emoji-style cartoon characters – of your choice, which reacts to your touch.

The Watch SE is available from Friday from Apple’s website and physical stores. Pre-orders open today. 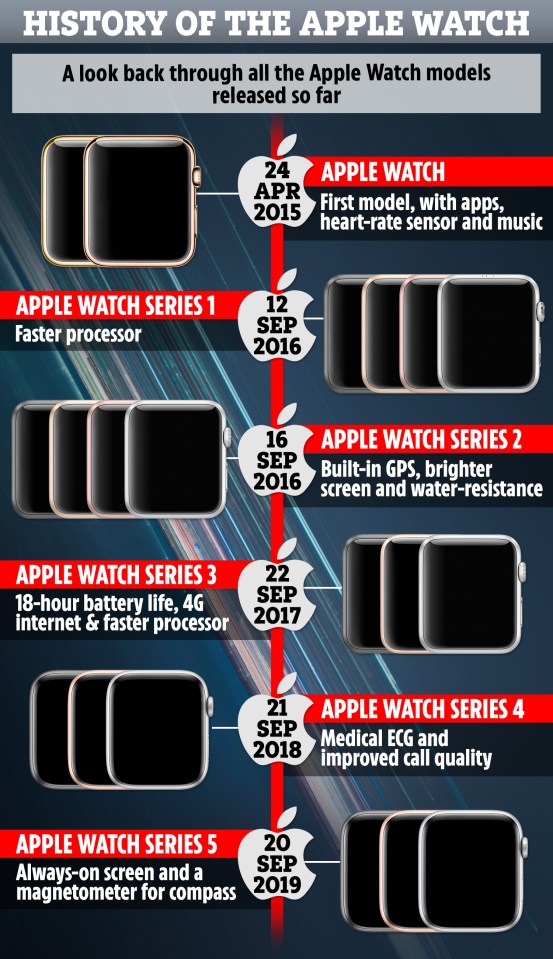 As far as software goes, the Series 6 will also benefit from all the new features coming to Apple’s latest watch software, watchOS7 – including sleep-tracking.

According to Apple, the system “provides valuable tools to help users get the desired amount of sleep, get to bed on time, and create a pre-bedtime routine to meet their sleep goals.”

The watch can automatically detect when you’re napping by tracking tiny movements that signal breathing during sleep.

It builds a chart with this data to let users know the quality and timing of their shut-eye.

The Apple Watch 6 is out Friday, and pre-orders open on Tuesday[/caption]

The new OS also has a feature that warn users if they’ve not washed their hands properly.

Using its motion sensors and microphone, the watch detects how long you’ve been washing your hands and alerts you if it’s under 20 seconds.

“Washing hands properly for at least 20 seconds can help prevent the spread of illness” Apple said.

Apple Watch can also remind wearers to wash their hands when they get home from a trip out.

The Apple Watch 6 was unveiled September 15 during an online-only event streamed from Apple Park in Cupertino, California.

Every year, Apple hosts a major autumnal event to showcase new tech – including an iPhone.

This year’s global health crisis threw a spanner in the works, however.

Gadgets such as the Series 6 and a new iPad were revealed in the Apple September event with less fanfare than usual – with a bigger iPhone reveal expected in the coming weeks. 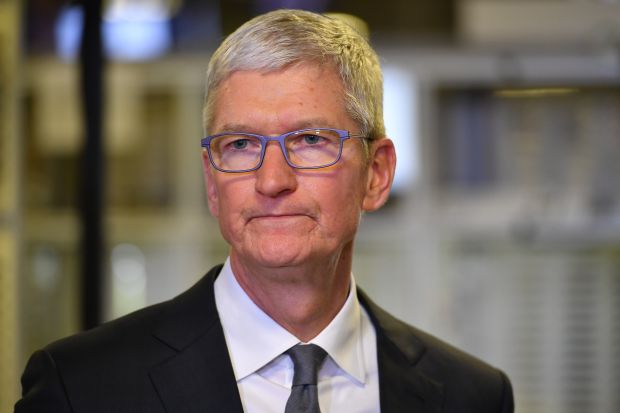 He's a ruthless businessman who rose from humble beginnings to become CEO of the world's most valuable company.

And now Apple boss Tim Cook, 59, is worth a reported $1billion less than a decade after he took over from cutthroat founder Steve Jobs.

Cook grew up in the small town of Robertsdale, Alabama.

His father Donald was a shipyard worker, while mother Geraldine was a homemaker.

Cook graduated with a Bachelor of Science in industrial engineering from Auburn University in 1982.

As a student, he developed a system to improve the traffic lights near the college that was so successful it was adopted by the local police force.

This promising early start was followed by the astonishing success which saw Cook work at several tech giants before joining Apple in 1998.

The Alabaman is said to have received a personal invitation from Jobs to join the company.

Following Jobs’ tragic death in 2011, Cook was handed the reigns and has taken the company from strength to strength.

Like Jobs, he’s reported to rule with an iron fist, sometimes leaving staff “in tears” following meetings, according to The Wall Street Journal.

Staff refer to Cook’s Friday meeting with operations and finance staff as ‘date night with Tim’ as they often run long into the night.

Cook has overseen the launch of several major Apple products during his nine-year stint, including the Apple Watch and Apple TV+.

Extinct cave bear found WHOLE after being frozen for 30,000 years in Siberia

In other news, Android users are being warned not to download a specific phone background as it could crash their device.

Apple’s next AirPods could track your heart rate – using light sensors in your ears.

And, 3D designers have mocked up what the iPhone 12 could look like.

This billionaire built a big-money machine to oust Trump. Why do some Democrats hate him?