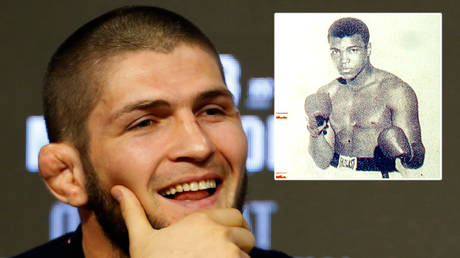 Khabib Nurmagomedov has insisted that Muhammad Ali's actions outside of the ring make him incomparable to the boxing icon, adding that repeating Ali's feats would require the UFC champion to "go back to those years and be black".

The unbeaten lightweight title holder has rejected parallels with the late heavyweight legend and claimed that their only similarity outside of their remarkable sporting achievements is their shared devotion to Islam.

Ali is arguably more iconic for his status as a social justice campaigner and figurehead for racial equality in the US, where his extensive list of honors have included medals from successive presidents for his work within the social rights movement and being named among the 100 Most Important People of the 20th Century by Time magazine.

“I think comparing Ali and me is probably wrong,” Nurmagomedov said, pausing after being asked whether he liked the comparison during an interview. “Only if we talk about the fact that we are both champions and both Muslims.

"But all the things he did outside of the ring – with this I cannot be compared. Indeed, at the time when he was a champion, he was... another race. At that time in America, black people were treated badly."

The first Muslim to win a UFC title made reference to an account in Ali's 1975 autobiography in which he recalled throwing his gold medal from the Rome Olympics into the Ohio River in 1975, having being turned away from a restaurant because he was black before brawling with a white gang.

"According to his stories, he was not even served in restaurants," explained Nurmagomedov. "He threw away the gold medal. He changed the attitude towards his race very much. So we cannot be compared.

“To be able to compare me with him, I need to go back to those years and be black. And be a champion. [Then] we would see how I would behave in such a situation. In this case, we could be compared.”

Nurmagomedov is known to enjoy watching Ali's classic encounters. Speaking about the victory over Al Iaquinta that saw the Dagestani become the first modern Russian UFC champion in 2018, his coach, Javier Mendez, admitted to a podcast: "I told him, 'please don't get stuck hitting this guy because he can take it, give it back and he is hard.

Nurmagomedov confessed after the fight: "I was too much [like] Muhammad Ali [against] Joe Frazier."

Ali beat Frazier for the second time shortly after his return from Rome, again avenging an initial defeat to the American in a showdown dubbed the 'Fight of the Century' in 1971.

Racial tensions had undercut some of the early trash talk between the pair, when Ali called his rival a "dumb tool of the white establishment" and even claimed that members of white supremacist group the Ku Klux Klan were among those rooting for him to win.

Their feud continued decades after their immortal trilogy, with Frazier bitterly accusing Ali of racism and angering his old foe again by telling him to personally apologize for the way he had hyped the fights rather than doing so through newspaper interviews.

Ali attended Frazier's funeral in 2011, five years before his own death from Parkinson's disease.