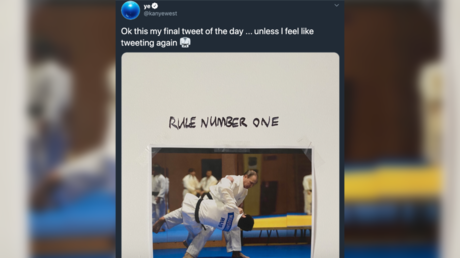 Kanye West returned to Twitter to continue a tirade against the music industry which ended with a rather puzzling message accompanied by a photo of Russian President Vladimir Putin mid Judo throw.

West, 43, took aim at his record company, Universal Music Group, and his publisher, Sony/ATV Music Publishing, among others, as he decried the state of the music industry and the treatment of artists.

"When you sign a music deal you sign away your rights. Without the masters you can’t do anything with your own music. Someone else controls where it’s played and when it’s played. Artists have nothing accept the fame, touring and merch"

He also tweeted an odd clip depicting gameshow contestants slipping down the stairs covered with lotion.

This is how it be when artist try to get our masters ... the stairs are covered with lotion pic.twitter.com/1pyNK0xkWW

He also claimed he wouldn’t be "putting no more music out” until his contract with Sony and Universal expires.

The 2020 US presidential pretender then, inexplicably, shared a photo of Russian President Vladimir Putin sparring with Musa Mogushkov, a member of the Russia Judo team, during a training session in the resort city of Sochi in 2016. "Rule number one, listen to Ye," read an accompanying caption in the photo.

Putin is national master of sports in Judo and Sambo, but few, if any, could figure out what West meant by sharing the image of the world leader-cum-martial artist.

Several Russian-speaking West fans were puzzled and amused by the tweet, but like many online, didn't really get the reference.

"No I wonder I love Kanye so much, he gets me," wrote one clearly amused fan.

Several fans even audaciously suggested that this might be an upcoming album cover, possibly for Yeezus 2, the follow-up to West's 2013 Grammy Award-winning album 'Yeezus'.

Am I the only one that sees this as an amazing album cover..? pic.twitter.com/6o4grs4rIR

The multi-platinum-selling artist was expected to launch an album, 'Donda: With Child', back in July in honor of his mother, but it never materialized.

Meanwhile, his bid for the White House appears to be faltering, as he has missed the deadline to register as a presidential candidate in a number of key states, though he has successfully made the ballot in several, including Colorado, Kentucky, Louisiana, Minnesota, and Mississippi.

Recipes: However you cook salmon, the meal goes swimmingly