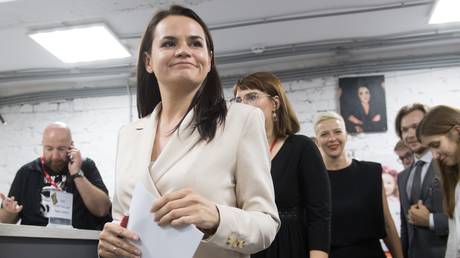 Exiled Belarusian opposition figure Svetlana Tikhanovskaya – official runner-up in last month's disputed election –  has promised incumbent Alexander Lukashenko that his safety will be guaranteed if he “peacefully” gives up power.

Speaking to Ukrainian publication Left Bank, Tikhanovskaya explained that a future non-Lukashenko government would take the opinions of Belarusian citizens into account, meaning he would receive “even more” than just basic security guarantees.

“This is all negotiable. Of course, if he leaves peacefully and humanely, it's probable,” she answered, when asked if she would promise the current president's safety.

Tikhanovskaya also spoke about her plans for the composition of her cabinet in the event of coming to power as the leader of Belarus. The Lithuania-based politician stated that an interim government would be formed from current ministers, and then any future decisions would be made by whoever won the election.

In Russia, Kremlin spokesman Dmitry Peskov noted that Lukashenko is the “legitimate president of Belarus” and therefore doesn't need Tikhanovskaya to ensure his safety. Moscow has repeatedly stated its support for the long-time Belarusian leader.

“I don't think he needs any security guarantees in his own country,” Peskov said. “As for the rest, it's all internal affairs of Belarus.”

On Monday, Tikhanovskaya criticized Russian President Vladimir Putin for meeting with Lukashenko, who she called the “usurper,” and claimed  that any deals made between Moscow and Minsk would have “no legal force” and would be “reviewed by the new government.”

Tikhanovskaya ran against Lukashenko in the 2020 presidential election, which took place on August 9. According to the official results, Lukashenko received 80 percent of the vote, but it's widely believed that the contest was rigged. In protest, thousands of Belarusians took to the streets, where they were met by the police with tear gas, stun grenades, and rubber bullets. Under duress, Tikhanovskaya fled to Lithuania. Vilnius then anointed her as the “elected leader” of the Belarusian people.

Meghan, The Duchess of Sussex wants to make the Internet a healthier place