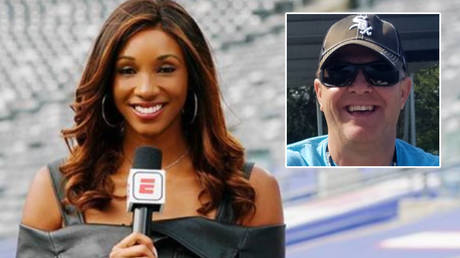 Chicago radio host Dan McNeil has been fired for using a "degrading and humiliating tone" in a tweet about an outfit worn by shocked NFL presenter Maria Taylor, who blasted back by accusing him of "misogyny" and "sexist comments".

Outraged supporters, fellow presenters and players turned on McNeil after his quip about Taylor's sleek choice of outfit, worn by the experienced presenter for her debut on primetime ESPN show 'Monday Night Football', which attracts an average audience of almost 13 million people.

The 670 The Score frontman asked whether Taylor was an "NFL sideline reporter or a host for the AVN annual awards presentation", suggesting that her clothes were inappropriate before removing the tweet half an hour later as readers reacted furiously to his views.

Taylor scolded McNeil for his "sexist comments" and told him to "bring your misogyny" to an NBA show she was hosting the following night, adding: "Hey, ladies: remember you can wear whatever you feel confident in."

Within 48 hours, The Score revealed that they had sacked McNeil. "For each one of us, our words have power," Rachel Williamson, the regional president for owners Entercom, explained in a statement sent to staff.

"For our brands and on-air personalities, that is amplified and brings increased responsibility [in] how we choose to use our voices. [McNeil's] tweet, and its degrading and humiliating tone to a fellow female broadcaster, was unacceptable.

"We apologize to all who were offended by Dan’s words – especially Maria."

Jemele Hill, a black female journalist with more than 1.3 million Twitter followers, savaged McNeil's remark as "just another example of what women have to go through in this business."

"Huge accomplishment for Maria to be part of the Monday Night Football team tonight," she said. "And here comes an asshole trying to undermine a big moment in her career."

There are two kinds of people in this world. Be more like @bhofheimer_espn and less like @DannyMac670 . Actually, be nothing at all like Dan McNeil. He's a douchebag. pic.twitter.com/SDsv1RTvuX

Well Danny Dearest if you would like to continue making sexist comments about me...please bring your misogyny with you to the NBA Countdown double header I’ll be hosting tomorrow night. Hey ladies remember you can wear whatever you feel confident in! @670TheScore @DannyMac670 https://t.co/bN0H582isU

Malcolm Jenkins, a safety for New Orleans Saints who has pledged that the team will "dedicate this season to uplifting the voices, exposing the oppression and highlighting black women", said Hill's words reflected "exactly the reason why we’re focusing on building up black women".

"Congratulations on such a big accomplishment," the two-time Super Bowl champion told Taylor. "Keep leveling up."

One of Jenkins' teammates, linebacker Demario Davis, labeled the tweet "100 percent unacceptable", told McNeil to "put some respect" on Taylor's name and warned him that the anchor was "family" and "dude don't want them problems."

"It’s time for men to stand up, respect and defend our women," the activist told his followers.

ABC reporter Lina Washington revisited speculation that reporter Taylor Rooks had been sneaked into the NBA bubble by Orlando Rockets star Danuel House, arguing that there were parallels with the way Rooks had been singled out "for no reason other than being a woman working in the bubble."

100 % unacceptable! It’s time for men to stand up, respect and defend our women. 1st of all, put some respect on Maria Taylor’s name. 2nd of all, Maria Taylor is family... dude don’t want them problems... https://t.co/HaizcDrQc6

Exactly the reason why we’re focusing on building up black women this season. @MariaTaylor congratulations on such a big accomplishment! Keep leveling up ???????? https://t.co/qOEv7e72hk

Always ride with @MariaTaylor - I love you my sister. Keep being GREAT. These haters could never.

"Tonight, Maria Taylor's outfit was the target of sexist remarks," she seethed. "When will the disrespect end? Let black women in sports be great and leave us alone."

Fellow ESPN NFL reporter Jenna Laine claimed: "Women in our business face a level of scrutiny and ridicule most will never understand.

"We are constantly attacked for our appearance, hair, clothing and voices. It’s painful. For black women in media, it goes even farther. And it has to stop.

"I have female colleagues who have literally spent two hours trying to find something to wear to work for fear of 'sending the wrong message.' Last week, I had a TV hit right after a Zoom call (so naturally more makeup) and the fans' comments were outrageous."

McNeil did not apologize on social media and offered no immediate public response to his firing. When an NFL fan asked him why he had deleted his tweet and called him a "misogynistic f*ck face" as the row spiraled, he retorted: "That's a big word for you."

Women in our business face a level of scrutiny and ridicule most will never understand. We are constantly attacked for our appearance, hair, clothing and voices. It’s PAINFUL. For Black women in media, it goes even farther. And it HAS to stop. Standing with you, @MariaTaylor. https://t.co/BmcolKs6zr

...I have female colleagues who have literally spent TWO HOURS trying to find something to wear to work, for fear of "sending the wrong message." Last week, I had a TV hit right after a Zoom call (so naturally more makeup) and the fans' comments were OUTRAGEOUS.

Yep, @MariaTaylor belongs at the adult table — far ahead of the narcissistic and self-important sports hacks who childishly spew bombast to cover their lack of depth. She is a brilliant, indefatigable analyst who covers so many sports with excellence. We are so proud of you!❤️????????

The long-serving presenter spoke about his own recent clinical depression during a discussion over Dallas Cowboys quarterback Dak Prescott's experiences on Friday, criticizing "the kind of comments today that get you trending on Twitter because of your idiocy."

He had been with The Score for a third time, having initially left in 2000 to help ESPN 1000 establish itself as a major sports station, although he was released shortly before his contract expired in 2009 before spending another five years at The Score, ending when he took time off to deal with personal issues.

Chicago sports media expert Jon Greenberg quoted a radio veteran as saying that the tweet would have earned McNeil "a week's suspension, at most" two years ago and "probably nothing" before then.

"In recent years, the 'Me Too' movement has led to a necessary disinfectant for every crevice of society," Greenberg wrote.

Every single day, women who work in sports open up their Twitter feed with a sense of dread in the pit of their stomachs. And everyday, women, especially WOC, like @MariaTaylor prove WHY it’s important that we keep fighting and keep working.

Last week folks brought Taylor Rooks into the Danuel House situation for no reason other than being a woman working in the bubble. Tonight Maria Taylor’s MNF outfit was the target of sexist remarks. When will the disrespect end? Let Black women in sports be great & leave us alone https://t.co/0u2phdDuoz

Lays low for 3-4 months after a half sincere apology.
Around 5 months, a blind item on a blog or column saying he was seen somewhere and looks great, has turned it around.
6-9 months starts the apology tour. He guests on a few shows, seems sincere.
Fall of 2021, back on air!

"But I have a hard time feeling like Entercom is some responsible corporate citizen, not when it just laid off some talented people at The Score [including] the station’s only full-time female host.

"Much like when McNeil was jettisoned from ESPN 1000 in 2009, I wonder how much his salary played into the quick decision. Whether or not Entercom will try to get out of paying off his deal should keep McNeil’s agent, Harlan, busy.

"Had McNeil said his comment on the air to a Chicago audience, nothing likely would’ve happened. It would’ve been forgotten.

"Puerile humor like that was a big part of 'guy talk' sports radio in McNeil’s salad days, but he’s not some caveman still living in 1998. He has adjusted and matured and he knows better. Or he should have."

Iranian president accuses US of ‘savagery’ after sanctions cost country $150B

Can California’s power grid handle all these electric cars? Roadshow