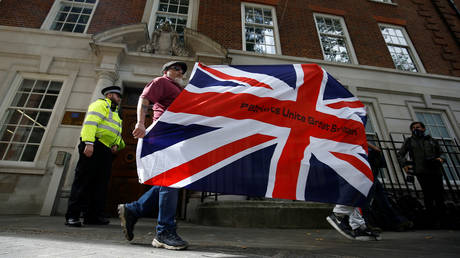 The divorce agreement between the EU and Britain “cannot be unilaterally changed,” President of the European Commission Ursula von der Leyen said on Wednesday, adding that this is a matter of law and trust.

“With every day that passes, the chances of a timely agreement do start to fade,” she warned in a speech to the European Parliament. The divorce agreement “cannot be unilaterally changed, disregarded or dis-applied,” von der Leyen said. “This is a matter of law, trust and good faith… Trust is the foundation of any strong partnership.”

The government in London unveiled draft legislation last week which it acknowledges would violate its international legal obligations. The move would also undercut parts of the divorce deal London signed before Britain formally left the European Union in January.

The bill is being debated by British Parliament, where Johnson faces opposition by some members of his governing Conservative Party. Scotland’s top law adviser to the British government, Richard Keen, has offered his resignation to Johnson. The resignation, which has yet to be accepted, was caused by the plan to break international law by breaching parts of the divorce treaty, the BBC said on Wednesday.

Johnson himself said that the bill in question is designed to protect the integrity of the UK and should be backed by lawmakers from all parties. “This bill is intended to uphold the economic, the political, territorial integrity of the UK,” he told parliament.

Johnson said earlier the bill is needed to counter “absurd” threats from officials in Brussels as part of the trade talks, while the EU warned the legislation itself could collapse the talks.

Finance Minister Rishi Sunak said on Tuesday that Britain wants to strike a trade deal with the EU but it is responsible to have a bill that breaches the Brexit treaty as “an insurance policy.”