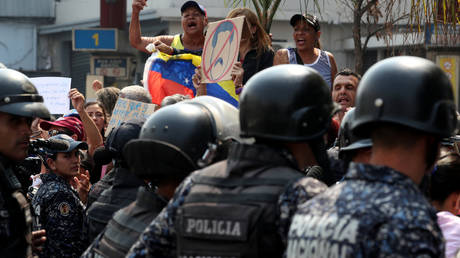 A UN probe alleges that Venezuelan police and security forces carried out extrajudicial executions and otherwise massively violated human rights. Caracas argued the UN action against it was part of a hostile US-led campaign.

Valinas noted that some of the recorded crimes were “arbitrary killings and the systematic use of torture,” which amounts to crimes against humanity. She said that President Nicolas Maduro and other high-ranking officials, including the ministers of interior and defense, were aware of the crimes.

The mission said that among the cases it examined were 16 cases of police and military operations resulting in 53 extrajudicial executions, as well as reviewed additional incidents involving 5,094 killings by police and security forces.

UN investigators were blocked from entering Venezuela after the country’s diplomats said the UN action against Caracas was part of a hostile US-led campaign. Foreign Minister Jorge Arreaza had previously slammed the UN for doing “little or nothing” to end the economic blockade imposed by Washington, which Caracas views as “economic aggression.” Venezuelan officials repeatedly accused the White House of plotting to overthrow the current government.

The US, along with their allies in Europe and the majority of South American countries, openly backs politician Juan Guaido who was last year elected by the then-opposition-controlled parliament as ‘acting president’ of Venezuela. States like Russia, China, Turkey and Iran continue to recognize Maduro as Venezuela’s leader.

Guaido and his supporters staged several large anti-government rallies, some of which descended into rioting and clashes with police. The politician also urged the army to take his side, but the troops largely remained loyal to Maduro.