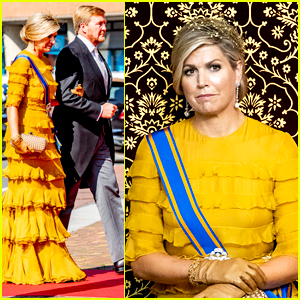 Queen Maxima of The Netherlands stole the spotlight during the opening event of the parliamentary year Prinsjesdag (Prince’s Day) in the Grote Kerk on Monday (September 15) in The Hague, Netherlands.

The -year-old royal joined husband, King Willem-Alexander, and other members of the royal family for the event, which was socially distanced due to the coronavirus pandemic.

Prinsjesdag was changed even more from past years, and the royal family removed the carriage ride and changed the location from the Hall of Knights, as to create more space for the members of parliament.

Just a few weeks earlier, Maxima, who re-wore one of her more recognizable looks, and Willem-Alexander, shared an apology for their own actions in recent weeks when they were seen not being properly socially distanced from another person while on vacation in Greece.

Other royal family members around Europe have also made public apologies for their actions during the pandemic.

Almost 1M have died from coronavirus. Their deaths taught researchers about treatment